The International Monetary Fund has agreed to lend $5.5 billion to Ukraine if the Kyiv government led by President Volodymyr Zelensky meets required conditions. While this agreement requires approval by the IMF board, it is still a strong signal, encouraging foreign investment and demonstrating support for Ukraine's government, especially on its anticorruption and economic policies. In addition, preliminary approval was crucial for Zelensky before entering peace talks with Russian President Vladimir Putin. Since 2014 and the Crimea crisis with Russia, Ukraine has endured a deep recession. The United States has provided economic aid since 2014, but the Trump administration delayed the most recent payments before release in September. To convince the IMF, Ukraine agreed to recover missing funds following a bank nationalization and other reforms. – YaleGlobal

Read the article from the New York Times about a conditional IMF loan for Ukraine.

Andrew E. Kramer is a reporter based in the Moscow bureau of The New York Times. In 2017, Mr. Kramer shared with Times colleagues a Pulitzer Prize for international reporting for an investigative series on Russia’s covert projection of power. 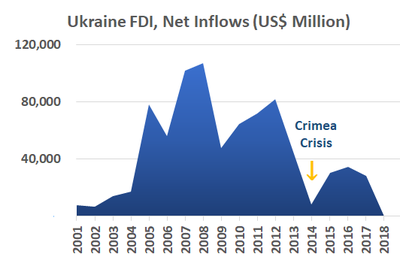 Up and down: Foreign investors seek profits and stability (Source: World Bank)

IMF to the Aid of Ukraine: Well-Intended, But Misguided