As AIDS starts to spread into "second-wave" countries, governments and health organizations alike are struggling to find the most effective ways to cope with the pandemic. Pramit Mitra examines India's challenges in confronting the disease, noting lessons other countries can garner from India's experience. With the second largest infected population in the world – at 4.58 million in 2003 – India has found itself not just dealing with a medical issue, but increasingly, a social and political problem. Though Indian leaders have publicly avowed their commitment to prevent a potential crisis, widespread and deep-rooted cultural stigmas will remain major obstacles. – YaleGlobal 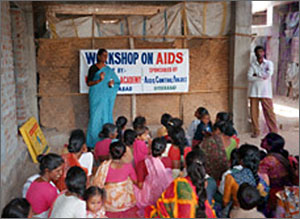 NEW DELHI: Eighteen years after the first AIDS diagnosis in the country, India has entered a critical period in its fight against the disease. And the country's strategy in combating the pandemic in the coming years will hold lessons not only for other "second-wave" countries grappling with the HIV virus, but also for neighbors in South Asia, who share similar socioeconomic characteristics.

By any measure, India has a serious problem on its hands. The government estimates that 4.58 million people – the second largest number in the world – were infected in 2003. Like China, where the HIV/AIDS epidemic may infect 10 to 20 million people by 2010, India will also face a gargantuan problem within five or six years. Considering India's population of 1 billion, even a small shift in the prevalence rate can result in tremendous numbers. With a weak public health infrastructure, a complex social structure, and high mobility (within the country and, increasingly, around the world), India's response to this looming "breakout" – a stage when the infection is no longer confined to the high-risk populations and breaks out into the general population – will show others how to proceed and the pitfalls to avoid.

Political leadership in the second-wave countries will be crucial, and on this front, there is some good news. The epidemic is now recognized as a major threat to India's health and economy by elites throughout the country. As in China, where Premier Wen Jiabao took a stab against the stigma associated with the disease when he publicly shook hands with three AIDS patients in December 2003, India's political leaders have also demonstrated a strong commitment. Sonia Gandhi, leader of the ruling Congress party, represented India at a UN General Assembly special session and at the 15th International AIDS conference in Bangkok, where she and Nelson Mandela presided over the closing session. Prime Minister Manmohan Singh, having spoken eloquently in private about the importance of preventing an HIV/AIDS catastrophe, has decided to take a more visible leadership role in combating the disease.

While the country's political leadership may be taking a more public stance, India's case also illustrates how an absence of social leadership can hamper efforts to counter the stigma attached to the disease. In addition to political figures, countries like India and China need a prominent cultural figure to do what American pro-basketball player Magic Johnson did in the United States: Come forward as a role model, and speak out against discrimination. The Indian film industry, a powerful cultural influence, has been slow to take up the HIV/AIDS issue. Despite the recent release of a feature film called Phir Milenge (We Will Meet Again), which addresses the AIDS issue, more needs to happen.

Almost all experts agree that deep-rooted stigma against HIV-infected patients makes the fight against the pandemic especially difficult, especially in second-wave countries where the middle class, by and large, is yet to acknowledge the danger posed by the virus. In India, like in many parts of the world, such as the Middle East and Northern Africa, complicated social norms and conservative attitudes make the fight against prejudices especially hard. In many countries affected by the epidemic, the silence and taboo surrounding discussions on sex has prevented open discussions about AIDS.

As a result, infected people are ostracized, and helpless groups – women, lower castes, and marginal populations – are too afraid of negative social consequences to take measures to protect themselves. Of particular importance is the understanding and addressing the special vulnerabilities of women. India's epidemic is becoming increasingly "feminized," yet women face a host of special difficulties in both prevention and access to care and treatment. Discussions about sex also remain off limits in most Indian households – even in elite private schools in big cities. AIDS is often seen as a disease restricted to a marginal, morally suspect population, which has "brought it on themselves." Even at the best medical facilities, there have been troubling cases of turning away HIV-positive patients.

Often, the emphasis on biomedical measures for fighting HIV/AIDS has tended to take attention away from the equally necessary task of fighting social stigma. Public understanding of specific ways to prevent infection, though rising, remains very low in the general population. One survey, for instance, indicates that more than 60 percent of Indians still mistakenly believe that they could contract AIDS by mosquito bites, sharing a meal, or shaking hands with an HIV-infected person.

On the treatment front, India's laudable efforts provide a solid example for other nations. Last April, the Indian government began providing antiretroviral drugs (ARV) directly to HIV-positive parents, children, and patients in government hospitals in the six most affected states. The Global Fund to Fight AIDS, Tuberculosis and Malaria contributed US$165 million to the program. India's plan distributes several fixed-dose combinations (FDCs) of ARV drugs that have been approved for use by the World Health Organization (WHO), including several made by Indian pharmaceutical companies. The program, which originally envisaged reaching 100,000 patients through fifteen delivery points, has opened eight and has begun offering treatment to 1,000 people. This slow start is a prudent response to the enormous challenges the program faces, including training doctors and dealing with extremely ill and often malnourished patients.

How India reconciles scale with diversity will also be an important development to watch. The country's enormous population includes countless regional and social microzones, each with its own dynamics – India has 22 officially recognized languages, in addition to English and Hindi. The challenge for policymakers is to move from targeted awareness and successful interventions among high-risk groups to developing country-wide strategies that can be tailored to local characteristics. The experience of meshing a huge state or national structure with small programs, which may need to be adapted to local circumstances rather than simply expanded, will undoubtedly provide lessons for dealing with epidemic elsewhere.

There are many ways of measuring the potential disaster, but one of them can be found in a July 2004 report by the Asian Development Bank and UNAIDS, which estimated that the Asian economic loss due to HIV/AIDS totaled US$7.3 billion in 2001 alone. There is still time to avert disaster, provided that India mobilizes relentlessly and the international community responds.

India needs help, but it also has lots to share. Its AIDS program produces satisfying success stories and demonstrates agonizing shortcomings. Democratic politics in India have complicated the fight against HIV/AIDS because many issues that figure so prominently in the epidemic – particularly those dealing with sexual behavior and marginalized populations – are not easy topics for discussion. Yet this picture is slowly changing, and there are signs that AIDS is becoming a political issue in selected areas. How Indian politicians handle a sensitive subject like AIDS in India's conservative society will offer clear guidelines to lawmakers in other second-wave countries. The world community will do well to keep a close eye on India's fight against the HIV/AIDS pandemic and avoid the pitfalls.

Pramit Mitra is a Research Associate with the Center for Strategic & International Studies (CSIS) in Washington D.C. He covered the AIDS epidemic in India for the Far Eastern Economic Review.