December 1 marks World AIDS Day, and by some reports, the world’s second most populous nation – India – has more AIDS cases than any other country in the world. The percentage of cases in India, at 0.09 percent, is miniscule compared with rates of 30 percent in some African nations, but the size of the nation’s population – 1 billion, with two out of five people illiterate – raises concern among world health experts. The population is young, with 35 percent under the age of 15, and mobile, too, with the booming economy. A growing epidemic will devastate families, a struggling public-health system that has the barest presence in rural areas, as well as firms that rely on healthy young employees. World AIDS Day, with its theme of accountability, reminds policymakers, health-care experts and corporations that awareness, counseling and testing can control the spread of AIDS. Health policy analyst Pramit Mitra points out how firms like Tata Steel promote awareness among employees about a disease that as yet has no cure, but is preventable – and the heavy consequences if the epidemic continues unchecked in one of the world’s fastest growing economies. – YaleGlobal

Failure to rein in the epidemic could undermine India’s growth and affect its trading partners
Pramit Mitra
Thursday, November 30, 2006 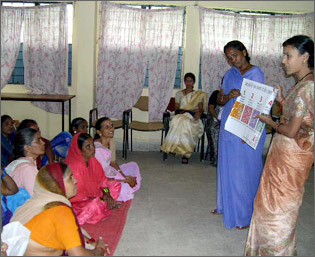 JAMSHEDPUR: Buoyed by its blazing economic growth, India is emerging as a favorite destination for foreign investors. But a threat is lurking that could damage the happy prospects, and that threat is nowhere better understood than in India’s corporate giant Tata Steel, because the stakes are very direct.

Talk to anybody at Tata Steel and he or she will tell you how seriously the company takes the HIV/AIDS epidemic. The same attitude is reflected in the company’s corporate culture. Instead of expensive art, HIV/AIDS posters line the walls of its corporate office and each employee, from the entry-level worker to the senior-most manager, gets periodic updates on the disease.

As India’s second largest steel producer, Tata Steel has a big stake in protecting its workforce. The company is located in Jamshedpur, a gritty industrial town in Jharkhand, a state teeming with a high-risk population including migrant laborers and truckers that makes its employees particularly vulnerable to the virus. But despite much-admired education and health programs for company employees and Jamshedpur citizens, Tata’s health workers fear that the disease is slowly tightening its grip on the state. At present, approximately 400 patients are on anti-retroviral therapy in Jharkhand, but many experts fear that weak surveillance and bad governance masks a much larger HIV/AIDS problem.

The same could be said about the rest of India. Almost 20 years after the first AIDS case was diagnosed in the southern city of Chennai, India is still trying to juggle different public health priorities, while maintaining and increasing its spending on HIV/AIDS programs. In the meantime, the number of HIV-infected people is rising at an alarming rate. There were 5.7 million HIV-infected Indians in 2005, of which 5.2 million were adults aged 15 to 49 years, according to the “UNAIDS/WHO 2006 AIDS Epidemic Update” released in November 2006. At present, the HIV prevalence is estimated to be 0.9 percent of the adult population (between 15 and 49 years of age). Though infection rates in India are far below those of sub-Saharan Africa, where up to a third of people are infected in some countries, the sheer population of the country means even small statistical gains equate to huge numbers of people.

If present trends continue, economists worry that India’s AIDS pandemic could jeopardize its growing economy, which has made the country one of the most sought-after destinations for Western investors. Managers at Tata Steel, for instance, are keenly aware of the experience in South Africa, where the AIDS pandemic has drastically altered the economy by reducing the output of the economically active population and forcing companies to substantially increase health coverage for their workers. In a labor-intensive industry like steel production, a full-blown HIV/AIDS pandemic could severely reduce productivity and efficiency of operations, in addition to degrading morale and workplace cohesion, forcing companies to hire and train substitute workers at enormous costs. In addition, episodes of illness have a negative impact on other members in the work team and on the work process in general that cannot be quantified.

Tata Steel is one of the few companies (domestic and foreign) in India that has set up care and treatment programs for their employees. It started its program aimed at its workplace, in which HIV/AIDS prevention, voluntary counseling and testing and, eventually, treatment programs were built into the company’s existing health plan for employees and their families. Among foreign companies in India, both DaimlerChrysler and Ford are in the process of making the employee-oriented programs they pioneered in Africa mandatory elements in their worldwide operations, so they will be establishing programs in India as well.

In India, given the overall low prevalence of the epidemic, the focus of the economic impact of the disease has remained at the individual and household level. But with the HIV/AIDS epidemic expected to infect between 20 million and 25 million people by 2010, there is bound be to a visible impact on India’s economy. The first attempt to measure the macroeconomic impact of HIV/AIDS was recently done by the New Delhi-based National Council of Applied Economic Research (NCAER). The report, which was partly funded by the Indian government and the United Nations Development Program, states that if present HIV/AIDS trends continue, there will be a measurable slowdown in India’s economy over the next 14 years.

The study found that the HIV/AIDS epidemic is likely to bring down the average annual growth rate during the 14-year period by 1 percent, accompanied by a reduction in per capita GDP. If AIDS continues to spread unchecked, health expenditure of households and the government will rise, which will reduce national savings, which, in turn, will have an adverse impact on investments. The decrease in investment will cause growth to slow, and hence, labor demand to shrink. The low demand for labor could lead to high unemployment rates resulting in social unrest in a populous country like India, where approximately 35 percent of the total inhabitants are aged less than 15 years, and whose population is expected to reach a staggering 1.63 billion by 2050. 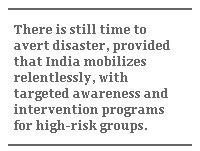 Experience from Africa suggests that the HIV epidemic hits hardest at those sectors of the economy that tend to employ a lot of unskilled labor. Not surprisingly, the NCAER study found a sizable reduction in the output of the manufacturing, construction, mining, textile, agricultural and tourism sectors – areas that employ a high percentage of manpower. As a result, the country could lose one of its most prized assets: cheap abundant labor. Manufacturing, which grew by grew 11.3 percent in the first quarter of 2006, provides Indian policymakers with a tool to provide employment and a better quality of life to 250 million people who live on less than $ 1 a day. Companies like Nokia, Dell and Hyundai have all set up manufacturing operations recently, drawn by India’s low cost of production and its booming domestic market. But if health-care costs of Indian workers rise, Western companies may flock to other rising Asian countries like Vietnam as an alternative.

Most experts agree that there is still time to avert disaster, provided that India mobilizes relentlessly. India has excellent small targeted awareness and successful intervention programs among high-risk groups, but the challenge for policymakers is to scale-up these successful programs, which can then be implemented countrywide with modifications to suit local characteristics. The first priority, health professionals say, is to expand the anti-retroviral drugs treatment program, which, at present, is available to less than 10 percent of those who need the medicine. In addition, improving the quality of voluntary counseling and testing centers sites, expanding surveillance programs and raising awareness about the epidemic are all urgent needs. India’s AIDS program continues to have satisfying success stories even as it is troubled by serious shortcomings. But unless India’s policymakers find a way to replicate the success stories, the resulting economic damage from an out-of-control epidemic will be substantial not only for India but also for India’s burgeoning trade partners.

Pramit Mitra is a fellow with the Center for Strategic & International Studies in Washington, DC, where he works on a Bill and Melinda Gates Foundation–funded project that seeks to provide policy recommendations for the US in fighting the global HIV/AIDS pandemic.