American Bombs in Iraq Show Up Fractures in Europe

When the going was good, the European Union looked like a model of globalization. Fifteen countries appeared to have subjected their many historical, political and cultural differences to the altar of a united Europe. The European Union was emerging as the second superpower. But the bitter divergences among the EU members that have emerged over the American war against Iraq serve as a reminder of the enduring impact of a country's history, culture, and specific economic interests, as well as the difficulty of developing a unified global policy. Writer Shada Islam quotes one European diplomat as saying "EU leaders need to acquire a new political reflex allowing them to look at the world through European rather than purely national eyes." Echoing that sentiment, the foreign minister of Greece, which holds the current EU presidency, is calling for a "strategic debate" with the US on how to deal with global values and governance and strengthen Europe's relations with the Arab and Muslim world. - YaleGlobal

American Bombs in Iraq Show Up Fractures in Europe 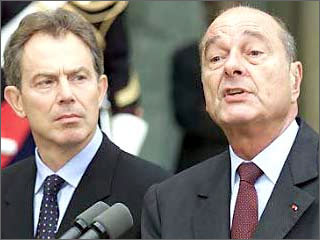 BRUSSELS: Even before American bombs and missiles started raining down on Iraq there was a casualty - in Europe. Deep historical, political and cultural differences that underlie the relatively recently forged unity were exposed as the European Union was confronted with a tough choice by Washington's new doctrine of preemptive strike against suspected enemy.

Fierce disagreement among the 15 members of the European Union over the rights and wrongs of US polices brought personal relations between the feuding leaders to an all-time low. The acrimonious public battles between Britain - backed by Spain, which staunchly supports US military action - and France and Germany, which oppose war, are a damaging setback for the EU's still-embryonic efforts to craft a joint foreign and defense policy. Their arguments have cast a dark shadow over work on drafting a new EU constitution. Disagreements over Iraq have also poisoned relations between current EU states and pro-American countries in Central and Eastern Europe set to join the Union next year.

European Union policymakers are braced for more angry exchanges among governments in the days and weeks ahead. But many also believe that Europe's latest and possibly worst crisis of unity in recent years can be overcome. Turmoil over Iraq may have taught governments an important lesson: to be taken seriously and have global influence, EU states must speak with one voice, says European External Relations Commissioner Chris Patten. A fractured EU cut a "sorry figure" on the world stage, Patten told the European Parliament recently, adding that the in-fighting had only worked to weaken the EU's global standing and international image. Leaders of Britain, Spain, France and Germany should take a closer look at "how much they have damaged their common enterprise and how much they have reduced their common influence as a result of public squabbling" Patten urged.

European unity is not just essential to ensure a more balanced transatlantic relationship but also to give the bloc more clout when dealing with China and Russia. "Today's quarrel may be with the US over Iraq, but the EU also needs to stand up to economic competition from China and Russia," warns a senior diplomat. "EU governments can only do that when they join together and maximize their voice."

Recent EU history certainly shows that European governments can learn from trial and error. After their failure to end fighting in ex-Yugoslavia in the early 1990s, EU governments appointed former NATO Secretary General Javier Solana as their "high representative" for foreign and security policy and stepped up consultations on international flash points. No sudden miraculous changes in EU foreign policy coordination ensued, but Solana, working with NATO, has managed to cope much better in stabilizing the turbulent Balkans region ever since. Also, after years of EU discord on policy towards the Middle East, Solana and his special Middle East troubleshooter Miguel Moratinos have managed to maintain EU cohesiveness in tackling Israeli-Palestinian violence and pursuing plans for peace in the region.

But healing wounds and reconstructing EU unity will take time and patience. EU differences over Iraq are deep and far-reaching and are unlikely to disappear in a hurry. "Governments disagree over the legality of the US action, whether it was necessary, if more time should have been given to U.N. inspectors and on whether or not the goal is regime change in Iraq," admitted Greek Foreign Minister George Papandreou, whose country holds the EU's rotating presidency.

Relations with the US will remain a divisive factor. EU reconciliation will remain difficult as long as Blair sticks stalwartly to Britain's long-standing "special relationship" with the US and persists in putting relations with America ahead of his loyalties to the EU. France, meanwhile, will continue to display distaste for playing by the rules of one "hyper-power." Putting bilateral Franco-British relations back on track will be especially difficult. Ties between London and Paris are already near rock-bottom: Over the last few weeks, Blair and Chirac have only managed to have a ten-minute telephone conversation which insiders described as "frosty." French officials have also expressed "shock" at Blair's accusation that France sabotaged US-British efforts to secure a second UN resolution authorizing military action against Baghdad.

Personal relations between other leaders - an important element in EU integration - have also never been as strained. German diplomats say Schroeder is so angry at Aznar's pro-American line that he will almost certainly veto any attempt by the Spanish Premier, who has promised not to seek a third term next year, to become the next president of the European Commission.

And this worsening personal chemistry among leaders could have serious policy repercussions. As the EU's top paymasters, Germany and France have hinted that Spain and Italy should no longer expect to receive generous handouts for their less-developed regions. Berlin has also said it wants provisions in any new EU constitution that would allow like-minded countries to forge ahead on certain issues - including foreign policy - without waiting for all states to get on board. This is already the case in the monetary sector where 12 EU countries are members of the eurozone, but Britain has said it does not want a two-speed Europe in other areas.

One lesson is clearly that the bloc needs stronger rules to force countries to consult each other on international crisis. But here, too, the future looks grim. In-fighting among governments has slowed down work on a new EU treaty being drafted by a 105-member convention. The forum's chairman and former French President, Valery Giscard d'Estaing, has said he wants the dust to settle before tackling vital issues like reinforcing EU states' obligation to coordinate their foreign policies. This will delay work on the draft - which still has to be discussed and approved by EU governments - beyond its June deadline.

Inevitably, too, the Iraq crisis has led to calls that the bloc should have a "real" foreign minister, combining the jobs of Solana and Patten, or even a president on a par with national heads of state and government, to ensure EU unity and authority in dealing with foreign governments.

The splits in the EU over Iraq also demonstrate the need for a single EU seat on the Security Council, says Graham Watson, leader of the Liberal Democrat group in the European Parliament. "The battle at the Security Council is a struggle to constrain the unfettered exercise of American power. Europe's troubled tribalism means that America wins. Despite having four out of fifteen seats on the Security Council we are powerless. If the EU had one vote, Germany, France, Britain and Spain would have to agree and speak with one voice. Europe's worldview would prevail," he says.

But others warn that new rules and provisions and even a joint EU seat at the UN - would not be enough to ensure that the EU speaks with one voice on world affairs. EU leaders need to acquire a new political reflex allowing them to look at the world through European rather than purely national eyes, says a senior diplomat. "It's not just a question of architecture but of political will. If there is a real difference of views among governments on an issue like Iraq, new rules will not make a difference. Even a full-fledged EU foreign minister would have wrung his hands in despair."

Still, despite the odds, Greece - as current EU president - is determined to use the coming weeks to mend broken fences and patch up battered EU relations. "We will use this crisis as an experience to move forward," says Greek Foreign Minister Papandreou, adding, "Many issues divide us but much also unites us." Greece's priority over the coming months will be to find common ground among EU governments on issues like humanitarian aid for Iraq, rebuilding the United Nations' credibility, and ensuring the territorial integrity of Iraq. Papandreou says he also wants a "strategic debate" with the US on how to deal with global values and governance and strengthen Europe's relations with the Arab and Muslim world.

One area where EU governments will certainly come together is to provide "day-after" emergency relief to Iraqi victims of conflict. But there is no agreement on EU participation in post-war reconstruction efforts. "The only thing we agree is that the UN must be center-stage in all further developments in Iraq... but some governments don't want to talk about reconstruction assistance at this stage," says an EU official.

These and other differences will, however, have to be overcome if the EU is to fulfill its often-expressed aim of becoming a global power. The good news is that despite the ill-will, EU leaders, foreign ministers, and officials are already talking and thinking about reconciliation and the ways to achieve it. Picking up the pieces of EU unity will require hard work. But as an EU diplomat put it: "If the EU advances as a result of crisis in five or ten years, the Iraq problem could be seen as a catalyst for strengthening European common foreign and security policy, not its death knell."

Shada Islam is a Brussels-based journalist specializing in EU trade policy and Europe’s relations with Asia, Africa and the Middle East.