American Ports in a Storm

New York Times foreign affairs columnist Thomas L. Friedman criticizes politicians in Washington for their opposition to a proposal to turn management of six US ports over to a state-run Dubai company. In an interview with YaleGlobal editor Nayan Chanda, Friedman argues that a far greater danger than any perceived threat to US security is thinking that holds it untenable for the US to cooperate with an Islamic nation on a business deal. Citing US anxiety over the Hamas election victory in Palestine, Friedman suggests that a nativistic mindset and security concerns threaten to undermine democracy and the free market as the guiding principles of an increasingly interconnected world. The transition to democracy in the Middle East, he holds, is most profoundly blocked by the absence of civil society and an authoritarian system where the “palace and the mosque” are inextricably linked to the exclusion of other guiding powers. Commenting on the war in Iraq, which he supported, Friedman expresses the fear that the “poison of ethnic division” may prove insurmountable. – YaleGlobal

American Ports in a Storm 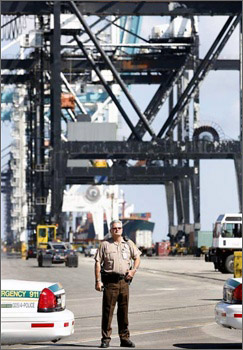 NEW HAVEN: A firestorm has broken in Washington over the proposed management takeover of six US ports by a state-run Dubai company. Politicians of both political parties view the impending move a security threat to the US. The company is owned by the United Arab Emirates, a country from where two of the September 11 hijackers came and whose banks were used to transfer money for the operation. New York Times foreign affairs columnist Thomas L. Friedman calls this uproar, with “a slightly racist overtone,” a “huge embarrassment” for the US, which could trigger a dangerous tit for tat with the Arab world. In an interview with YaleGlobal editor Nayan Chanda, Friedman also argued for not obstructing the newly elected Hamas from running the Palestine authority. “If it’s going to be ousted or it’s going to be de-legitimized,” he said, “then I think that’s for the Palestinians to decide.”

The controversy over the Dubai-ports deal and the western hand-wringing over the terrorism-linked Hamas victory in Palestine have brought into focus the contradictions besetting the globalized world where democracy and free market are supposed to be the guiding principle. The objections to the DP World’s acquisition of US ports management and the Hamas claim to run their territory show that nativistic thoughts and security concerns could trump the very principles supposedly guiding the increasingly interconnected world.

The controversy emerged when it became known that the Bush administration had approved the takeover of the management of the ports by Dubai Ports World from British-owned P&O (The Peninsular and Oriental Steam Navigation Company). In a recent deal, which awaits approval of the British court, DP World has acquired the worldwide operations of P&O for $6.8 billion. The company manages container terminals and logistics operations in more than 100 ports spread over nearly 20 countries including China, India and Europe. The US politicians have criticized the deal because of Dubai’s past link to the terrorists and have argued that unlike P&O, which too was a foreign-owned company, the DP World is state-owned.

However, Friedman says “We’re not turning over our ports, security over to Dubai Port Authority. We’re turning over the port authority and six ports to people who will say, “Park here, park there. Collect the fees and what-not and manage the traffic of the port.” Inspection will be done by the American workers and not by “cousins” brought from Dubai. “I think it’s a shameful and has slightly racist overtones to it," he says. “This is about keeping ‘a bunch of Arabs’ out of our country, that’s what this is really about. And it’s a bad thing, not only because it doesn’t reflect our real values.” Friedman points out that American companies like IBM, FedEx or UPS run around, doing business in the Arab world. “What if they then turn around and say, ‘You’re not going to take ours, well, we’re not going to take yours.’ We’re in a very dangerous tit for tat that could get going here.”

Friedman agreed that the unspoken subtext of the American criticism is the fact the DP World is run by Muslims. He sees a dangerous lurch toward such nativism provoking backlash. “It’s part of the dangerous backlash going on. Both sides are guilty of it. When people ransack a Danish embassy in Damascus and the government allows it. You know, governments are there to restrain people’s worst impulses. We have nativists in our country. They have nativists in their country that are going to always want to push these issues. Government’s job is to restrain that, and I think this is a real issue, a really shameful episode. I think the president’s right on this one.”

Asked about Hamas victory and the talk in western capitals to deny Hamas aid unless they disown their stated goal of destroying Israel, Friedman said he was opposed to that approach. “I think that Hamas is a terrorist organization, but I also think that it won a free and fair election and if it’s going to be ousted or it’s going to be de-legitimized, then I think that’s for the Palestinians to decide.”

He pointed out that by forcing Hamas to publicly recant their position would not be convincing.” If we said to Hamas tomorrow, “Well, you don’t get any money, unless you sing “Hatikva,” the Israeli national anthem. The next day, they say, “Fine” and they start singing “Kol od balevav p'nimah…” Fine, would you believe them? And then you say that “You have to sing ‘Hatikva’ in perfect Yiddish, standing on one leg and pulling your ear. I still wouldn’t believe them.” He said it is pointless to ask someone to do something when you are unlikely to believe them. Instead, he says, “Why not ask them to do something that is really hard and that you would believe. And that’s maintaining a ceasefire with Israel. Oh, that speaks to me so much more than any words. If Hamas is ready to do that, if they’re ready to allow the Palestinian Authority to continue in a dialogue, negotiations with Israel, that’s what’s really important.”

Of course, the Hamas victory is not the only problem lurking in the Middle East. Egyptian president Hosni Mubarak is resisting democratization, pointing to the specter of victory by fundamentalist Islamic Brotherhood candidates. Friedman says such arguments should be rejected and the West should be ready to accept the Islamic Brotherhood.

“I guess the response should be, ‘Guys, for 50 years, you’ve been telling us that’s it you or the mosque. All you Arab autocrats are telling us, moi or the deluge. Well, you know what, we got the deluge anyway, and it was called 9/11. And it was called 7/7. And we keep getting the deluge. And part of the reason we keep getting the deluge is because you keep producing more of these people with your authoritarian systems. So you know what, we tried that for 50 years. Maybe we’ll give this a try for a couple of years.”

Friedman said that the absence of civil society in the Middle Eastern countries makes a smooth transition to democracy impossible. “You don’t go from Saddam to Jefferson without going through Khomeini in the Arab world, because there’s nothing between the palace and the mosque. There is no civil society at all. So when the palace breaks either by election or invasion, you go straight into free fall, and we have to accept that’s the reality. We have two choices. We can preserve the palace, as we’ve been doing for 50 years, knowing that it’s actually creating a context that’s actually producing more of these angry, frustrated, unemployed young men or just say, you know what, let’s try to liberalize the mosque.”

Friedman had supported the US intervention in Iraq to topple Saddam as a necessary step to bring about democracy. Asked about his thoughts on the current situation in Iraq he said, “What worries me, Nayan, is that we may be too late. I don’t know. We made so many mistakes there. What I worry about is that it may be too late – that the poison of ethnic division is now so much into the bloodstream of Iraq.”

Click here for the full transcript of an interview with Thomas L. Friedman conducted on February 22, 2006.