Angst of a Stagnating Germany

In the midst of fierce debate concerning the future of the EU, German Chancellor Gerhard Schröder's call for a September election has opened a national discussion about the future of Germany. Since the unification of East and West Germany, the economy of the formerly prosperous welfare state has stagnated. Already high jobless rates are intensified by competition with low-wage foreign workers. By all indications Germany is ready for a change, and writer Dominic Sachsenmaier predicts "a wrenching economic transition." German politicians seem to have lost faith in globalization and the brand of capitalism it has spawned, and the new government will likely try to reform the existing welfare state. Sachsenmaier predicts that in such uncertain times, the tendency towards nationalism will be tempered with strong support for European cultural identity. But if other European nations reject the "deeper, culturally defined Europe" that Germans crave, Sachsenmaier warns, "the specter of German nationalism may be back." – YaleGlobal

Angst of a Stagnating Germany

How to build prosperity based on cultural identity when companies go offshore?
Dominic Sachsenmaier
Tuesday, July 5, 2005 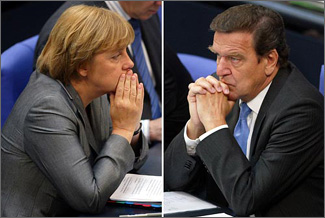 BONN: German Chancellor Gerhard Schröder's call for early elections in September has set Germany up for intense soul-searching and debate about the country's identity and its role in a globalized world. The outcome of the election could have profound effect on the fraying European Union.

The German introspection has been long time coming. In 1989, crowds danced on the Berlin Wall and the reunification of two Germanys had Chancellor Helmut Kohl brimming with confidence that the eastern part of the country would quickly turn into "flourishing landscapes." With the country's unique socio-economic system based on a close cooperation among trade unions, employers, and financial investors, "Germany Inc," most international observers agreed, was ready to roll. They expected a stable, West-oriented Germany to grow into a powerful economic engine that would pull a new Europe towards a prosperous future.

That was in 1990. Today it's a very different Germany: Rather than becoming a blooming frontier, the East has essentially remained a rustbelt. Despite each of the past four administrations' efforts, the number of jobless people has been growing steadily. In the winter it had reached five million – or 12 percent of the entire workforce – approaching the figures that had plagued the late Weimar Republic. Entire regions struggle with an eroding young population. With a graying population and stagnating economy, the national debt now surpasses 1.4 trillion Euros.

Are we about see a disillusioned Germany turn its back on the European Union? A survey of German public opinion does not suggest such a dire outcome, but the country is getting ready for a wrenching economic transition – which will likely render the country more inward-looking.

How Germany fell from its high pedestal has become a subject of intense public debates in Germany. While the pain and cost of absorbing the newly reunified nation-state – as well as the burden of working with a stagnant European Union – are seen as partly responsible, special blame is placed at the door of globalization and the type of capitalism it has spawned.

The worrying thing for many is that though Germany may be in trouble, German companies are doing fine by taking jobs abroad. Siemens CEO Heinrich von Pierer stated recently that his company grows where its markets grow – that is, in East Asia, North America, and other regions. Indeed, competition from low-wage countries has cut the connection between ever-increasing productivity and higher standards of living for the entire German population. Skilled laborers abroad now work for a fraction of the German salaries and the high social welfare contributions. According to a Boston Consulting Group study, 43 percent of all German companies would like to invest abroad over the next ten years. This means that up to two million additional jobs may follow the movements of these investments.

This offshoring of jobs has eroded the once legendary role of trade unions within the German system. Their membership has shrunk from ten million in 1995 to seven million now, and their influence has dwindled. Some of the luxury features of Germany Inc., such as the "Christmas Money" (an extra month's salary), special bonuses for working on Saturdays, or the 35-hour working week, are now in the process of being dismantled. And not even half of all German corporations still adhere to the national or regional agreements hammered out by the trade unions.

German soul-searching has, in fact, gone beyond blaming globalization and foreign labor. One-time champions of the capitalist model of development, German politicians of all stripes find capitalism has gone bad. The German parliament is about to become a branch of the stock market, where civil rights are squandered, bitterly notes Nobel laureate writer Günter Grass. Franz Müntefehring, the majority leader of the governing Social Democrats (SPD), recently compared corporate giants to locusts stripping bare entire areas. And in an article Heiner Geissler, the ex-general secretary of the conservative Christian Democrats (CDU) – the party likely to regain power in a probable early election – likened the merger and acquisition policy of large corporations to the mentality of 18th century slave traders. For Geissler, capitalism has gone wrong as much as communism once had.

In the public, there is now a tough new sense that the very fundaments of the postwar constellation cannot be left untouched. Both West Germany and the newly unified Germany had been characterized by the promise of ever-growing prosperity for all its citizens, which had finally tamed the long-present specters of class tensions and nationalism. At least from a West German perspective, the Cold War system is now finally coming to an end in the country.

The sense of radical changes or even a dawning new epoch raises questions about the directions a future Germany might take. There is some fear that the stable liberal democratic center may be fraying at the margins. For example, an extreme nationalist party last year won about 10 percent of the votes in two statewide elections in the former East. And on the extreme left, a newly founded party involving prominent figures such as Oskar Lafontaine, the former leader of the Social Democrats, is quickly gaining support. With a declared aim to lure voters away from the extreme right, this new socialist party has started to mix its message with nationalist undertones. This was most notably the case when Lafontaine vowed to protect German jobs against "foreign workers" – "Fremdarbeiter," a term used by the Nazis during World War II.

Indeed, sentiments against non-European immigrants and against further expanding the boundaries of the European Union continue to run high. It is widely feared that such a step would destroy the basis of a European identity and import instability rather than exporting stability. Support for the idea of Europe continues to run high in Germany, even though a public referendum on the European constitution would have probably added another "nein" to the French "non" and the Dutch "nee." Recent opinion polls suggest that the average German citizen feels more trust for the European Union in general than for any single German political party. The European integration is commonly regarded as a guarantor of social welfare. In a time of growing insecurity, the German public also demonstrates an urge for culturally-rooted identity. The idea of Europe provides a guilt-ridden nation with the opportunity to connect itself to a more triumphant, peaceful past.

It is very likely that after the September election, a new Christian Democratic government under Angela Merkel, who would be the country's first female leader, will continue to reform the welfare state but try to keep its key facets. It will try to do so in close conjunction with the European Union, but it will seek clear boundaries and common identities. For now, the challenges of globalization will push Germany deeper into its European commitments. But it remains to be seen whether this search for a deeper, culturally defined Europe will meet the approval of Germany's key European partners. If the European project turns out to be a failure, the specter of German nationalism may be back.