The Atlantic Divide over Fighting Terrorism

Spain recently commemorated the first anniversary of the March 11 terrorist train bombings. With an international conference on terrorism and five minutes of nation-wide silence, Spain's conduct one year after the tragedy is markedly different from the US declaration of war in response to 9/11, writes Jonathan Schell. As the world grapples with the terrorist challenge, Spain demonstrates an appealing response: The model of global citizenship on the international level – and grassroots civic solidarity on the national level – has emerged as an attractive alternative to Washington's unilateral militaristic action. Representatives at last week's Madrid conference made veiled criticisms of the heavy-handed US response. In a transparent allusion to prisoner abuse and the US Patriot Act, UN Secretary General Kofi Annan remarked, "As I see it, terrorism is in itself a direct attack on human rights and the rule of law. If we sacrifice them in our response, we are handing a victory to the terrorists." Schell does not think anybody in Washington is listening. – YaleGlobal

The Atlantic Divide over Fighting Terrorism 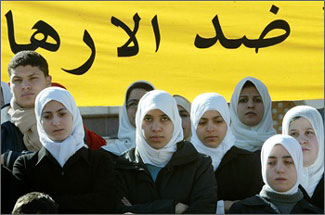 We are not afraid: Spanish Muslims join the demonstration against terrorism to mark the first anniversary of the Madrid bombing. (Photo: Reuters)

MADRID: Last March, a new word entered Spanish vocabulary: "9/11" of the United States has found an echo in Spain's "M-11," the March 11 terrorist attack on Madrid. Yet the first annual commemoration and accompanying international conference on terrorism could not have made clearer the vast gulf between Americans and the Spanish, or even international response to the same threat. Civic courage, and not fear, is the message Spain wants to convey to those attempting to terrorize the public.

From the start, the countries' responses differed. In Spain, the attack upon civilians in four Madrid railway stations – killing 191 and wounding some 2,000 people – prompted immediate, huge public demonstrations. Viewed from the United States, where no such response occurred after 9/11, the response at first seemed puzzling: Why demonstrations? Did Spaniards imagine that marches with placards would reach the hearts of people who carry out massacres? On second thought, the logic of the act became apparent: Terrorism is an attack upon civilians, not soldiers; it is meant to strike fear into other civilians. It made sense, then, for civilians, not soldiers, to respond with a clear message: We are not intimidated. Since intimidation is the purpose, the demonstration scored an immediate victory over terrorism. At a stroke, it removed the point of the attack.

Three days later, the Spanish electorate voted a new government into power, replacing the Popular Party headed by Prime Minister Jose Maria Aznar with the Socialist Party headed by Jose Luis Rodriguez Zapatero. Aznar had blamed the attacks on the Basque separatist movement ETA, ignoring or suppressing clear evidence of Islamic extremist involvement. Had the attacks been by ETA, Spanish analysts widely believed, the Popular Party would have been helped. In part to punish the government's apparent manipulation of the evidence, voters chose the Socialists. Zapatero had promised in the campaign to withdraw Spain's troops from the deeply unpopular war in Iraq, and he promptly made good on his pledge. Some in the United States accused the Spanish of appeasement, but their demonstration belied the charge: They were acting out of civic courage, not fear.

Right after the attack, the public had thrown itself into action, in the demonstrations. A year later, the public desisted from daily activity, in reflection and in prayer.

In the days leading up the commemoration, the Club de Madrid, formed by ex-heads of state, held a conference on Democracy and Terrorism, which was supported by the local government and attended by both Zapatero and UN Secretary General Kofi Annan.

Meanwhile, Spanish authorities have been relentless in pursuit of the terrorists. Seventy-nine people are under active suspicion, and of these, 24 are in jail. A Pakistani cell has allegedly been broken up. The Spanish police had also been busy arresting other terrorist suspects – 57 are now in prison, awaiting charges – and, according to the police, foiling other possible attacks.

All of this, of course, has differed greatly from the US reaction to 9/11. In the United States, no nationwide public demonstrations occurred; the government took the lead. And it went to war, first in Afghanistan, then in Iraq. The president not only launched the two wars, but set forth a rationale for others. Identifying an "axis of evil" of three governments – Iraq, Iran, and North Korea – that supported terrorists and sought weapons of mass destruction, President Bush has, so far, overthrown only the first of the three.

Two countries, two responses: In Spain, a local, civil response in three great waves – the demonstration, the election and consequent withdrawal from the war, and last week's silent commemoration; and in the United States, a global, military response – a policy of unilateral action in defiance of international law and opinion.

Each response reflected the character, philosophy, and visceral instinct of the government and people involved. However, the US response was based on something even more elementary: The United States could choose war only because it possessed the means for war – its US$400 billion military force.

What has been missing, then, is an alternative global response to global terror – on the American scale, yet different in approach. The world has been unhappy with US wars, but what was its plan? This was the focus of the conference in Madrid. Two streams of reform flowed together. One was a renewed European commitment to effectuate its long-promised continent-wide coordination of resources of intelligence and prevention. The second was UN reform proposed by a high-level panel, whose recommendations on terrorism were formally embraced by UN Secretary General Kofi Annan at the conference.

On the one hand, for example, Annan endorsed a definition of terrorism that seemed &bound to please the Bush administration. An attack upon civilians, he said, was "terrorism" only if it was carried out by actors other than states. States were excluded from the definition on the grounds that "deliberate use of armed force by States against civilians is already clearly prohibited under international law."

Annan likewise made a Bush-like declaration: "All states must know that, if they give any kind of support to terrorists, the Council will not hesitate to use coercive measures against them." He was, in effect, signaling that if the United States brought proposals for future military attacks on states that supported terrorism, it might win UN approval.

On the other hand, both Annan and almost all conferees agreed on two basic principles that plainly rebuked the Bush administration: The fight against terror must be multilateral, and it must be waged within the bounds of law and with full respect for human rights. In the words of the Madrid Agenda, "International legitimacy is a moral and practical imperative. A multilateral approach is indispensable." And, in Annan's words, "As I see it, terrorism is in itself a direct attack on human rights and the rule of law. If we sacrifice them in our response, we are handing a victory to the terrorists."

Washington made clear its rejection of these principles through two actions, one showing disdain for the UN, the other demonstrating distaste for the Madrid conference advice. It appointed John Bolton, who once had recommended sawing off the top ten stories of the UN, as its ambassador to that institution. And it chose as its representative to the Madrid conference Attorney General Alberto Gonzalez, who had called the Geneva Conventions governing war "quaint" and solicited memos justifying torture.

Words at conferences come and go, but these expressions of principle gained meaning and substance from the places in which they were proclaimed. Europe and the United Nations seemed to be moving toward the new Spanish model of a fight against terrorism. They seemed to be saying, if only implicitly, to the United States, "We can do this, too. But not your way."

Jonathan Schell is a distinguished visiting fellow at the Yale Center for the Study of Globalization. He is the author of “The Real War, and The Unconquerable World: Power, Nonviolence, and the Will of the People.”