Europe is polarized over globalization, unsure about whether traditions of ample social benefits can survive today's capitalism and competition from countries with low wages and labor standards. Yet consolidation through acquisitions is a trend for many industries, including steel, to reduce costs and increase economies of scale. Europe has long scooped up firms from around the globe, but becomes testy when its own firms become targets for takeover. The world’s largest and most global steel company, Mittal Steel, has bid for Europe’s leading steelmaker Arcelor, based in Luxembourg. Arcelor’s management is resisting the bid, with some critics suggesting that European operations could be up-ended, even shifting jobs to Asia. For protection, Arcelor management has turned to a Russian state firm, Severstal. Journalist Jonathan Fenby suggests that the many contradictions displayed by Europe about such takeovers reveal an increasing divide between public and private spheres, only triggering populist outrage over governments’ inept handling of their economies. – YaleGlobal

Avoiding takeover by Mittal, Europe’s leading steelmaker could jump out of the frying pan into the fire
Jonathan Fenby
Thursday, June 1, 2006 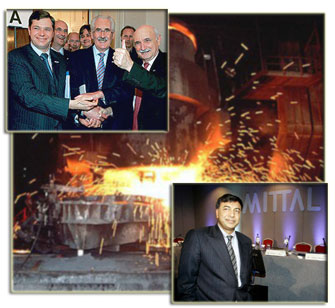 LONDON: Lakshmi Mittal is the very model of a globalized business tycoon. Having built a net worth estimated at $25 billion, the Indian businessman runs a worldwide steel empire, its operations stretching from the US to Kazakhstan, from Indonesia to Poland. His ambitions to grow even bigger, however, embroil him in a bitter fight with Western Europe’s largest steelmaker, which casts revealing, and sometimes uncomfortable, light on the continent – and France, in particular – as it seeks to come to terms with the tide of globalization that leaves many of its citizens deeply uncertain.

Mittal’s latest takeover target is the Luxembourg-based steel Arcelor group, which is controlled by a network of French, Luxembourgeois and other interests, some government-owned. His bid aroused sharp opposition, including criticism of the way he runs his group, which he tightly controls. The hostility goes well beyond the desire of the Arcelor management to keep its independence. Though Mittal Steel is incorporated in the Netherlands and Mittal lives in one of London’s most expensive mansions, the bid has been widely represented as threatening the loss of a major European industrial undertaking to a global corporation with no national loyalties.

That plays in to fears on the continent of the power of international business and the market. Such concern has become a major political and populist force over the last year – fuelled by the belief that the European Union (EU) Commission in Brussels wants to push liberalization and deregulation through its “Lisbon Agenda,” aiming to raise European competitiveness. The debate has not been notable for its clarity or precision, as Europe goes through a muddy patch as far as political leadership is concerned, with faltering leaders and widespread voter alienation.

Nowhere is this more the case than in the country that still claims to give Europe its political leadership – France. The Chirac administration is embroiled in a run-up to the presidential election in spring 2007, and the 73-year-old head of state has slumped to a record low in opinion polls, while Prime Minister Dominique de Villepin has been forced into highly embarrassing policy reversals.

Fear of globalization, even if constrained within Europe’s borders, played a big part in the rejection of the proposed EU constitution by French voters a year ago. A recent poll by GlobalScan for the University of Maryland showed that, alone of major countries surveyed, the French reject market capitalism. No leading French politician would dare defend what is known as “le libéralisme anglo-saxon” – that is, the rule of the market. Ignoring the fact that Britain has lower unemployment and higher growth than France, parties of the right and left unite in denouncing Tony Blair’s policies. For President Jacques Chirac, “le libéralisme” is as bad as Communism. Now, the French-led hostility to the Mittal bid has thrown into sharp focus the contradictory strands in Western Europe between such fears and a corporate desire to share in globalization.

On the one hand, there are deep worries about the movement of jobs to cheap-labor areas – including new East European members of the EU – the sharp rise in imports from China, and the failure of political leaders to set out a convincing policy to deal with the continent’s high unemployment and relatively low growth. After four decades of generally rising prosperity, Europeans, particularly in the original EU member states, find it hard to accept a world that has changed radically and in which the old equations no longer work. For instance, Western Europe enjoys high levels of hourly productivity; but the short work week and long holidays mean that performance falls behind the US and Asia on an annual basis.

In that context, the Mittal bid has come to represent everything feared by defenders of the “European model” of big state welfare and regulation. If Mittal controlled Arcelor, it is argued, a major European industrial group and its jobs would be at the mercy of an unaccountable management that might suddenly switch operations to Asia. The reaction follows a string of other examples of nationalist knee-jerking, including a deal cobbled together under the auspices of de Villepin that saved France’s big Suez public works group from being taken over by an Italian company by engineering a link-up with the state-owned gas provider. Similarly, Germany’s Siemens has been stopped from buying into France, while the government in Paris has drawn up a list of industries regarded as strategic, and therefore worthy of defense. The list includes casinos.

On the other hand, European companies have been highly active in snapping up firms across the globe. Renault runs Nissan in Japan, French firms buy up power and water treatment firms across the world; L'Oréal group of Paris snaps up Britain’s Body Shop. Rising worry about globalization hardly slows the acquisition drive of French firms.

The Mittal affair might have been regarded as a prime example of hypocritical national protectionism. But it has now taken a further twist as Arcelor seeks salvation from Moscow. In a $16 billion deal announced in late May, the company will cede a third of its shares to a Russian company, Severstal, in return for acquiring the owner’s stake in a merger that would create the world’s biggest steel group. Mittal is not the only one put out at this turn of events. Severstal’s owner, who will eventually increase his stake to 40 percent, has close ties to the Kremlin, so fears have emerged that Areclor may find itself engulfed in the politicized world of Russian business.

The company’s top management waves aside such worries. But issues of investors’ rights are being raised, given the lack of consultation. Critics say Severstal’s assets have not been properly evaluated and that the Russians are not paying a premium for effective control. Goldman Sachs, working for Mittal, is asking shareholders to press for an emergency meeting at the end of June to evaluate the two offers.

What is plain is that Europe’s industrial policy, such as it is, is one great contradiction. France backs the idea of “national champions” – rejecting Mittal. but then embracing the Russians whose energy is increasingly important for European economies. Arcelor management described the head of Severstal as a “true European” as one of the reasons for partnership. The EU Commission doggedly pursues the Lisbon Agenda despite watching it fall far behind its target of producing the world’s most competitive economy for the next decade. Meanwhile, companies move ahead at their own pace, often world-class fast. The gulf between traditional state-driven solutions and the ways of the market, between public and private, becomes ever more plain, threatening to fuel ever stronger populist rejection of what is seen as a menace to a way of life.

Continental European governments and frightened voters are marching to a different drum than that of Americans and Asians. In that context, it may be ironically fitting that Arcelor should seek its white knight in a company that is part of the Russian state apparatus, with potential for the Kremlin to increase its influence in Europe through surrogates. What that means for the continent’s ability to compete in the world is quite another question.

Jonathan Fenby is author of “On the Brink, The Trouble with France,” published by Abacus Books, and editor-in-chief of www.trustedsources.co.uk.