The expansion of the European Union to include another 75 million people in Eastern and Central Europe is an event of monumental proportion. Negotiations remain underway as 10 new countries adjust their economies and polities to EU standards on agriculture, trade, human rights, and other issues. Meanwhile, people around the globe are taking stock of what a larger EU means for their region. - YaleGlobal 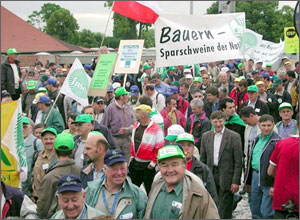 European Union farmers protest: Will there be more after cutbacks in direct income aid to farmers? (Courtesy of: EPP-ED Group in the European Parliament)

BRUSSELS: On December 13 in Copenhagen, the European Union made history. "A new Europe is being born," declared Danish Prime Minister Anders Fogh Rasmussen as EU leaders swung open the doors of their 15-nation club to ten new member states, most of them former communist nations of central and eastern Europe. Raising his glass to the long-awaited unification of east and west Europe, German Foreign Minister Joschka Fischer called the EU's big bang expansion “the definite end of the Cold War."

Europe's embrace of Cyprus, the Czech Republic, Estonia, Hungary, Latvia, Lithuania, Malta, Poland, Slovakia, and Slovenia on May 1, 2004 will trigger immediate and far-reaching changes in the contours, size and shape of the Union. Also transformed will be the EU's goals and ambitions. Created more than fifty years ago as an intimate group of six West European countries seeking peace through economic cooperation, the new EU will include 25 nations, stretching from Portugal to Poland and - with the entry of the 3 Baltic states - reaching deep into the territory of the former Soviet Union. The one-time European Economic Community is now a Union of states committed to further political and economic integration and striving to forge a common foreign and security policy. Enlargement is expected to spur efforts to widen the EU's remit.

Some things are certain: Enlargement will boost the EU's population by 75 million and its GDP by 5 per cent. It will cost the 15 current members 40.8 billion euros in aid to the new members in 2004-2006. New members are committed to running free markets, respecting human rights and playing by EU rules on trade, environmental protection and immigration.

But even as EU governments scramble to prepare for expansion - adjusting and adapting the bloc's clumsy decision-making procedures and creaky institutions to the entry of 10 new members - most insiders concur: Europe's latest enlargement remains a leap into the unknown. The complex three-year long membership negotiations focused on the details of each new member's entry conditions, access to EU funds and the finer points of revamping local laws to meet Union standards. Pushed to the sidelines were wider political issues including the impact of a larger Europe on an increasingly interdependent world.

Small wonder then that much remains unclear about post-2004 Europe. EU watchers in the United States and Asia say they expect a largely positive fall-out from Europe's eastward enlargement, arguing that EU entry will give political and economic stability to the once-volatile nations of the east and make the region a more attractive market for exports and investments. The current EU meanwhile, benefiting from the accession of Eastern Europe's fast-growing economies, will also become a more dynamic trade and business partner. For nations in the Middle East, the hope is that expansion will give the EU a more forceful global political role, including as peacemaker between Israelis and Palestinians.

There are also concerns. The task of integrating ten diverse nations into the complex EU machine will be an undoubted distraction for EU policymakers. "No one is talking this time around about the emergence of a 'Fortress Europe', but we do wonder about how self-absorbed the new EU will be," admits an Asian diplomat. Many in Africa worry that entry of ten, largely poor countries, could mean a redirection and a refocus of EU aid from Africa to less-favored regions in the east.

Already emerging are the outlines of a raft of internal changes to be wrought by expansion. Changed rules for nominating members of the European Commission - the EU's executive arm - will mean that countries will only be allowed one Commissioner each as of 2004. Currently, larger members Germany, France, Britain, Spain and Italy send two Commissioners to Brussels. Governments' right of veto in the decision-making Council of Ministers will be severely restricted, with increased use of majority voting. EU leaders and members of a convention or forum on the future of Europe are squabbling over whether the new Europe should be headed by a President, combining the tasks currently performed by European Commission chief Romano Prodi, Javier Solana, the EU "high representative" for common foreign and security policy and the President of the EU Council, currently Greek Prime Minister Costas Smitis.

A more self-confident EU on the world stage

Expansion will almost certainly make the task of forging a common Union approach to international problems more trying if only because decisions will require the assent of 25 nations instead of the current 15. But expect also a more self-confident EU ready to take on a more forceful role, both in its "near abroad" - Russia, Ukraine, the Balkans, Caucuses and North Africa - and on the wider global stage. Signs of a new EU focus on its immediate neighborhood are not difficult to find. Prodi is pressing governments to hammer out a new "proximity policy" of establishing strong links based on "shared political and economic values" with all its new post 2004 neighbors. Not all countries in the EU's neighborhood are potential members of the Union, the commission chief underlined recently. But many could secure "the benefit from its of membership without formally joining," sharing everything with the EU but institutions.

With its expanding sphere of influence, the EU will act as a "constraint to the more idiosyncratic aspects of U.S. policy," argues Michael Emerson, senior research fellow at the Brussels-based Centre for European Policy studies. And once it gets its act together in the "wider Europe," the EU will certainly flex its muscles with more confidence in the Middle East. China and other Asian countries seeking a multi-polar world are likely to be pleased with a more assertive EU foreign policy stance, but, warns Emerson, "the U.S. is going to have to face a stronger EU on the world stage." Significantly, enlargement is also spurring the EU to take on defense and security responsibilities. A 60,000 strong European Rapid Reaction Force, designed to take on humanitarian and peace-keeping missions, will soon become a reality. An EU police force is already operational in Bosnia, and EU officials are gearing up to take over NATO's peace monitoring mission in Macedonia.

The fall-out of EU expansion on the Union's development policy remains uncertain. On the plus side, the new entrants will start contributing to the EU's multibillion dollar aid programs, including the 13.5 billion euro European Development Fund for African, Caribbean and Pacific (ACP) states. But discussions on the size and timing of the new members' aid packages have yet to start. And given their current low level of official development aid - Poland, for example, gives only 0.26 per cent of its GDP as aid compared to the EU average of 0.33 per cent of GDP - ACP officials say enlargement is unlikely to mean a windfall for poor nations. In fact, many fear, the need to pump more money into the east could mean at least a temporary slowdown in EU development aid.

EU officials are confident that expansion will be good for business, with foreign exporters securing access to a massive frontier-free single market, with no variations in tariffs, technical standards and other entry conditions. Adopting the EU customs regime will mean a decline in tariffs across most of eastern and central European states, a potential boost for exporters. But trade experts in developing countries are more cautious. Many say they expect no immediate impact on sales to the east given the region's almost total trade focus on current EU members. If anything, many fear a hardening of EU attitudes, with the newcomers expected to be skeptical of the Union's tariff preference schemes for poor nations on products such as textiles and clothing, steel and footwear, also produced in the east, and potentially more enthusiastic advocates of protectionist tools such as anti-dumping duties to keep out cheaper goods.

Enlargement, backed up by pressure from European consumers and the World Trade Organization, has been key in spurring EU farm reform. The farm sector employs about 13 per cent of the population in the east compared to 4 per cent in west Europe. Fearing an explosion in EU farm spending if the Common Agricultural Policy (CAP) system of farming subsidies remained unchanged after the entry of largely rural Poland and other candidates, the EU has set firm limits on newcomers' access to direct income aid provided by the Union. Farmers in the new states will receive 25 per cent of the full EU rates in 2004, rising to 30 per cent in 3005 and 35 per cent in 2006, with some provisions for topping up the flow of funds by using money earmarked for rural development. In addition, a decision by EU leaders to set a 42 billion euro limit on farm spending from 2006 to 2013 - with provisions for only 1 per cent annual growth to allow for inflation - will effectively mean a cutback in EU-wide direct payments.

Planned changes to the CAP also include moves to "decouple" production from direct payments. Money should now be paid out to farmers not on the basis of their farm output but commitment to abide by stricter environmental, health and food safety standards as well as tougher animal welfare rules, according to a new reform plan tabled by the European Commission. But the proposals have run into strong French resistance. And there is concern that once inside the EU, farmers in Poland may join their French counterparts in opposing change. "We can't count on the new member states to ensure progress in EU farm policy," warns a U.S. official.

Fearing a sudden surge in the east-west flow workers, EU countries have set a tough seven-year long transition period for the free movement of east Europeans seeking to work in the west. But even more worrying for the EU is the prospect of illegal immigration from future neighbors Russia and Ukraine as well as an increase in people-smuggling across the bloc's new and less strictly-controlled eastern borders. Future members have received millions of euros in help to toughen border controls, bring their visa systems in line with the EU's, and train police and border guards. Given demographic pressures and an ageing population, the EU will probably continue to need foreign immigrants. But, with its new east European focus, this opening up is expected to be selective, with the focus on the Balkans and Ukraine.

The exact consequences of bringing another 75 million people into the EU are still uncertain. The greater economic power a unified EU could wield may lead to further re-consideration of the political relationships between member countries and could create a force to counter-balance the US in Asia, the Middle East, and elsewhere. With debates already in progress over foreign aid, agricultural subsidies, and trade restrictions, however, one thing is certain: the road to expansion will be bumpy at best, chaotic at worst.

Shada Islam is a Brussels-based journalist specializing in EU trade policy and Europe’s relations with Asia, Africa and the Middle East.