Bush’s Conversion on the Road to Tehran

These days, the competition for the title of "World's Most Pressing Nuclear Threat" seems tight. Weeks ago, North Korea stole the show with its admission of nuclear weapons possession; but in the battle for headline primacy, at least, the Iran issue has emerged as this week's winner. The most recent development involves the United States: On March 11, the Bush administration dropped its previous stance of non-negotiation, offering several concessions to Iran in exchange for dismantling its nuclear weapons program. According to policy analyst Philip H. Gordon, the offer – though qualitatively minor – represents a significant shift in US tactical approach. On the surface, the move falls in line with the European mode of incentive-based negotiation. Though many question the motivation behind Washington's announcement, it may prove a positive development. In the end, writes Gordon, "It is better for the United States and Europe to come together to give it a try, rather than persist in their separate failures." – YaleGlobal

Bush's Conversion on the Road to Tehran

In a tactical change of course, Washington joins the EU in offering "carrots" to Iran
Philip H. Gordon
Friday, March 18, 2005 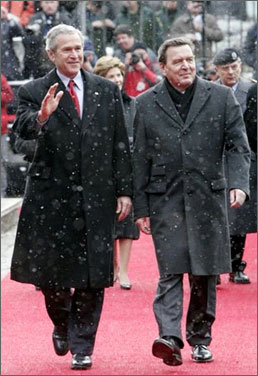 Walking together: President Bush with German Chancellor Gerhard Schröder during a recent trip to Europe where Bush changed his approach to Iran. (Photo: White House)

WASHINGTON: In the first major foreign policy shift since beginning his second term, President Bush has backed off his uncompromising line on Iran, joining Europe in a common front against that country's suspected nuclear weapons program. While the true motivations and potential outcomes of the new policy remain in question, Bush's conversion on the road to Tehran may signal a positive turn in the administration's heretofore unbending and unilateral foreign policy approach.

The policy switch was as sudden as it was unexpected. Just a few weeks ago, Secretary of State Condoleezza Rice was still insisting that the United States had no intention of offering incentives to Iran to give up its nuclear program. She asserted repeatedly, in Senate testimony and to the press, that the administration had other issues with Iran – terrorism, Israel, human rights – and that compromising would only legitimize the regime of the Mullahs and reward bad behavior. "The Iranians know what they need to do," was Rice's curt response to questions about whether the United States might get involved in the European approach.

And now they also know what they might get in exchange. In a surprising – and encouraging – turnaround, the administration announced on March 11 that the United States would indeed offer Iran "carrots" – support for Iran's WTO entry and the delivery of US-made spare parts for civilian airliners – in exchange for ending its suspected nuclear weapons program. The offer itself is not terribly convincing, and Iran rejected it immediately – but the conceptual change is potentially significant.

Cynics will argue that the new administration line is merely a change in tactics, and they have a point. Most Bush officials still do not believe that that European approach will work, and thus see no harm in backing it for now. That is, no doubt, why skeptics like Vice President Dick Cheney and Secretary of Defense Donald Rumsfeld were willing to back it. In this sense, the administration's new approach is designed less to help produce a European nuclear deal with Iran than it is to avoid blame for the failure of such a deal. A former senior administration official, who remains in touch with the White House, recently told me that the administration remains highly skeptical of the European approach, and that the real debate is about what to do when it fails.

It is also true that Washington's proposed incentives are pretty meager. Iran badly needs the airline spare parts, but nobody believes they will sacrifice their nuclear program for them. Similarly, WTO membership will take years to negotiate and would require vast changes in the Iranian economy – which might end up seeming more like concessions from Iran than concessions to it. Still, for the Bush administration even to consider such steps is a philosophical breakthrough that may prove more significant over time. It involves the United States in a process and ends several years of inaction, which could only be described as "malevolent neglect." To paraphrase a famous quip, the principle of dealing with Iran has now been established – all that remains is to haggle over the price.

The administration's conversion seems to have taken place during Bush's late February trip to Europe. Prior to departing Washington, there was still no sign of US flexibility, and Bush showed no intention of compromising with the Europeans on Iran. When pressed hard by his European partners in private meetings, however, Bush promised to reconsider, and National Security Adviser Steven Hadley announced that the White House would soon review the policy. That review is now complete, and the result is explicit US support for the very incentives the administration was ruling out just weeks before. It appears that Bush's promise to take allied views more into account in his second term was at least somewhat sincere.

Equally important is the European role in the new approach, which is probably where the promise of the new deal lies. In exchange for their long-sought support from Bush for more carrots, the Europeans have agreed on more sticks. This week, in a letter to the rest of the EU, the three lead negotiating nations – France, Germany and Britain – confirmed that they will take the Iran issue to the United Nations Security Council if Iran continues to refuse to permanently and verifiably give up its uranium enrichment program – and would do so on a timetable agreed with Washington. Europeans will remain reluctant to support the tough economic sanctions on Iran, but they are also getting fed up with Iran's foot-dragging and lack of transparency on the nuclear issue.

The apparent US-Europe deal on Iran is thus a very tentative first step, but it is a step in the right direction. The bottom line is that the only conceivable way to persuade Iran not to pursue its nuclear program is for a joint US-EU package of both carrots and sticks. At present, Europe has essentially exhausted its carrots: It already trades with, talks to, and invests in Iran. Likewise, America has exhausted its sticks: It has no economic or diplomatic interaction with Iran and lacks good military options. To change Iran's incentive structure will thus require more US carrots and more EU sticks.

There is obviously no guarantee that such a deal will work – indeed, chances are it won't – but there is still hope. Other potential or actual nuclear-weapons states, after all – including South Africa, Egypt, South Korea, Ukraine, Taiwan, Argentina, and Brazil – have in the past been persuaded to forego or give up the bomb when presented with the right mix of benefits and costs. And Iran itself – whether in the 1990s over the issue of terrorism, or more recently over its nuclear program – has always retreated, at least tactically, when faced with credible threats of sanctions from a united international community. And at least now, should the deal fail, the United States will have a better shot at international support for a tougher approach, and it will be less susceptible to the charge that it didn't give diplomacy a chance.

If the Americans and Europeans pursue a tough-minded, united approach, Iran would basically be confronted with a clear choice: Become an impoverished, isolated, pariah state with nuclear weapons (like North Korea), begin to reintegrate with the international community, meet the needs of its young and growing population, and preserve its security in exchange for foregoing such weapons. Such an approach is far from perfect – and yes, there is something distasteful about cutting deals with this Iranian regime. But it is better for the United States and Europe to come together to give it a try, rather than persist in their separate failures, or pursue military options that would probably create more problems than they solved.

Philip H. Gordon is a Senior Fellow in Foreign Policy Studies at the Brookings Institution and author, with Jeremy Shapiro, of Allies at War: America, Europe and the Crisis over Iraq.