Europeans celebrate the anniversary of the Treaty of Rome – along with 50 years of peace and prosperity on March 25. Belgium, France, Italy, Luxembourg, the Netherlands and West Germany formed what began as an economic alliance to promote trade with one another. That community has since expanded both in terms of membership and responsibilities, and this two-part YaleGlobal series explores Europe's growing pains. In the first article, Brussels-based journalist Shada Islam analyzes the hesitation of Europeans in approving a European constitution or further expansion for the European community. Members of the original European Economic Community, such as France and Germany, benefited immensely from the steady growing ring of cooperation – and yet now France and Germany are most resistant about extending membership to Balkan nations or Turkey. As Europe confronts "high levels of unemployment, slow labor-market reforms and the rising budgetary costs of providing for an aging population," Europe must strive for more, not less cooperation. Gradually expanding membership could forestall some of the challenges posed by globalization and ensure ongoing prosperity for the continent. – YaleGlobal

Rejecting Turkey could signal more doubt about the EU's ability to spur reform rather than Turkey's readiness to adapt
Shada Islam
Wednesday, March 21, 2007 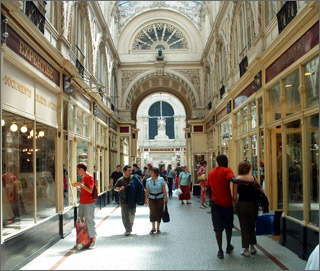 Lap of luxury: Europe celebrates 50 years of prosperity, but closes its doors to

BRUSSELS: When European leaders gather in Berlin to mark the 50th anniversary of the bloc's founding Treaty of Rome, they will have much to celebrate, not least the 50 years of peace and prosperity unprecedented in their history. Yet no amount of uplifting speeches and champagne can disguise Europe's current malaise. Today's EU is in the midst of an unprecedented crisis of confidence.

Much of the hand-wringing is due to uncertainty over the fate of a new EU constitution, rejected in summer 2005 by voters in France and the Netherlands. Since unanimity is required for ratification, the treaty - designed to streamline decision-making in an expanded EU - has effectively been put on ice. EU governments are split on whether to revive or bury it.

Europeans also worry about the impact of globalization on their jobs and further EU enlargement, especially plans to bring mainly Muslim Turkey into the bloc. At the same time, the failure to integrate up to 20 million Muslims living in Europe is creating social tensions, with many Europeans fearing that the radicalization of disaffected Muslim youth poses a long-term threat to EU security.

The 27-member EU with almost 500 million people was created as the European Economic Community by Belgium, France, Italy, Luxembourg, the Netherlands and West Germany on March 25, 1957. Built on the ruins of World War II, the governments established the EU largely to prevent another war between Germany and France, by forging strong economic bonds between the two nations. France and Germany remain the EU's leading "motors" for development, working over the last 50 years to break down national trade barriers and create a single market where goods, money, services - and to some extent, people - can move around freely. The creation of the euro single currency in 2002 was a major breakthrough with 13 EU states now agreeing to replace their national currencies with the euro.

But those heady days of visionary projects - and visionary - leaders appear to be over. In contrast to the joint drive for integration in the 1990s by the iconic European Commission President Jacques Delors, French President François Mitterrand and German Chancellor Helmut Kohl, today's EU leaders are often at cross purposes over the long-term destiny of the EU. The European Commission, the EU's executive agency currently headed by former Portuguese Premier José Manuel Barroso, struggles to come up with new initiatives to keep the EU engine running. Barroso's plans for rapid energy- sector liberalization and fuel-conservation measures to fight climate change are not universally popular.

Germany, the EU's largest nation and most powerful economy, is run by a fragile coalition of conservative and social democrats whose efforts at much-needed economic and labor- sector reforms leave much to be desired. Upcoming presidential elections in France, pitting Socialist Ségolène Royal against the conservative politician Nicolas Sarkozy, mean that the French political elite is too engrossed in internal politics to worry about Europe. British Prime Minister Tony Blair meanwhile is focused on salvaging his place in history despite public alienation over the Iraq war and has little time to devote to EU affairs.

Believing that current EU unease is mainly due to uncertainty over the future of the failed constitution, Merkel, whose country holds the current EU presidency, has promised to try and resolve differences over the treaty among EU leaders. But with Paris and The Hague undecided on what they want, the German leader can only hope to set a timetable for reviving the treaty over the next two years.

Discord over the constitution is only a part of the problem. EU countries are also split on the future economic direction of Europe. The gap is wide between Britain's liberal reform agenda - favored also by most EU newcomers from Central and Eastern Europe - and the social welfare model espoused by France and Germany. Europe's economic future is clouded by high levels of unemployment, slow labor-market reforms and the rising budgetary costs of providing for an aging population.

Plans for further EU enlargement are causing discord. Accession to the EU has so far been viewed as a reflection of the bloc's "soft power" ability to encourage democracy and spur reform in future members. In the 1980s, the prospect of joining Europe helped speed democracy in Greece, Spain and Portugal. In the late 1990s, the pull of the EU helped transform Central and Eastern Europe into modern, market-driven democracies.

Since the EU's big-bang expansion in May 2004 to include eight former communist nations as well as Malta and Cyprus, enthusiasm to include more nations appears to have waned. Bulgaria and Romania were welcomed into the club on January 1, 2007, but with the caveat that they could face trade and aid sanctions if they do not fight corruption and organized crime. Increasingly, EU leaders talk of "enlargement fatigue" and insist that the future pace of enlargement must be dictated by the ability of present members to "absorb and integrate" the poorer states knocking at EU gates.

While membership negotiations with Croatia are underway and Macedonia has been recognized as eligible for accession, the EU's go-slow on expansion is a disappointment for western Balkan states - Serbia, Montenegro, Bosnia-Herzegovina, Albania and Kosovo - which clamor to enter the bloc. The new approach also effectively puts a lid on EU-entry aspirations harbored by Ukraine and Georgia.

The warning is especially aimed at Turkey. Ankara opened accession talks with the EU in October 2005, but negotiations stalled late last year after Turkey refused to open its airports and harbors to Greek Cypriot traffic, a move which Brussels argues is discriminatory against an EU member state. Ankara's long-running dispute with Nicosia means that it has no relations with the Republic of Cyprus.

Although the current suspension in EU-Turkey negotiations is only partial - and the talks are likely to last up to 15 years - key German and French politicians make no secret of their opposition to opening EU doors to Ankara. Merkel continues to maintain that Ankara should be offered a "special relationship" instead of membership while French presidential hopeful Sarkozy has made his "non" to Turkey's accession one of the hallmarks of his candidacy. While politicians in both countries have retreated from earlier statements pointing to Islam as the reason for their anti-Turkey posture, many like Sarkozy insist that "Turkey is not meant to join the EU, because Turkey is not a European country."

Others like Britain, Sweden, Spain and Italy, however, point to the country's high growth rates, labor productivity and economic dynamism, arguing this will help a declining Europe stand up to competition from China and India. Most significantly, they warn that rejecting Turkish accession will send the wrong signal not only to Islamic nations closely watching the membership talks, but also to European Muslims, many increasingly anxious about their future in an EU that has failed to find the right balance between combating terrorism and ensuring the integration of minorities.

EU leaders at the Berlin celebrations are unlikely to refer to these challenges for fear of further alienating a public already disillusioned by the remoteness of EU institutions and their leaders' failure to deliver on jobs and improved security. But as they raise their glasses to the past, Europe's political elite must find a way to address the EU's many f uture challenges.

Shada Islam is a Brussels-based journalist specializing in EU policy and Europe’s relations with Asia, Africa and the Middle East.