Even as Europe celebrates the 50th anniversary of the Treaty of Rome, the upcoming French presidential election in April serves as Exhibit A of the continent’s discontent. Since the end of World War II, the nations of Europe have integrated for reasons of trade, law and policy. Countries once poor and under fascist regimes have prospered. In the second article of a two-part series on Europe’s attitudes toward globalization, Jean-Pierre Lehmann, professor of political international economy, notes how France was once a prime mover of integration. But the nation has since become insecure and insular, and leading contenders in the French presidential race reflect the mood. “All this hardly bodes well for the future of France or for the future of Europe,” writes Lehmann. “This in turn may have a negative impact on the rest of the planet.” Lehmann offers the reminder that prosperity, innovation and the best of human values flourish in open societies that reject politics of nationalism and resentment. – YaleGlobal

Europe has proven the worth of democracy and integration, but is in no mood to celebrate
Jean-Pierre Lehmann
Friday, March 23, 2007 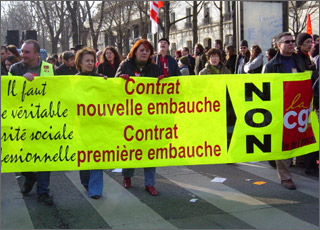 Season of discontent: As French workers resist policies that give employers flexibility for hiring,

LAUSANNE: March 25 marks the 50th anniversary of the Treaty of Rome. Europe has accomplished much during these 50 years – political and economic achievements far beyond the wildest dreams of the European architects of the time. The agonizing paradox, however, is that while there should be so much to celebrate, Europeans seem mainly in the mood to commiserate. The continent is more rudderless and cheerless than any time during the past five decades.

Not so long ago, in 1986, two erstwhile fascist dictatorships, Portugal and Spain, joined the European Community (EC). This was by no means an inexorable process. The legacies of Franco and Salazar did not include democracy. An attempted coup d’état in Spain in 1981 almost reversed the process.

Ultimately, however, the entry of Spain and Portugal effectively ended fascism as a system of governance in Europe. This is not to say, alas, that there are no fascists around. There are, but fascism is not the ideological force that it had been in Europe during some brutal decades of the 20th century. Spain and Portugal were on the outer periphery of Europe not only because of their political regimes, but also economically. They remained poor as the states of the EC prospered. Since 1986, though Portugal has fared less well, Spain rapidly became one of Europe’s most thriving economies. This in itself confirms the claim that the European experiment has been the greatest achievement in promoting democracy and enhancing prosperity the world has ever seen.

During that same year, 1986, who could have imagined that Latvia, Estonia and Lithuania, not to mention Poland, Hungary and the other former European satellite states of the Soviet Union would become, in a not too distant future, fully fledged members of the European Union? Only a soothsayer or a fool could have predicted that the Soviet empire would disintegrate so rapidly and that Central and Eastern European states would switch from the Soviet Union to the EU. Having vanquished fascism in the 1980s, Europe vanquished communism in the 1990s.

The truly “historic” enlargement in 2004, comprising eight former Soviet satellite states along with Malta and Cyprus, caused little joy and a lot of suspicion among the established members. Reactions to the addition of Romania and Bulgaria this year were negative. There is talk of “enlargement fatigue.” Though Croatia may just manage to squeeze by, the candidacies of Bosnia-Herzegovina, Serbia, Macedonia, Montenegro and Albania are more than on ice, while the prospect of Turkey’s membership has generated an ugly spectacle of the clash-of-civilizations genre.

This deep European malaise is perhaps at its most acute in France, which, along with Germany, was the initial prime mover of European integration. The defensive nationalist rhetoric of virtually all candidates for the French presidential election in April provides an unpleasant illustration.

What occurred in Europe in the late 1980s and 1990s was undoubtedly remarkable in its own right, yet European developments should also be seen in the much broader context of the “globalization revolution.” This revolution was marked by a series of simultaneous discontinuities, with the end of the Cold War as key landmark. While throughout most of the 20th century, the vast majority of people lived under highly restricted conditions of both political and economic freedom, by the beginning of the 21st century, reforms in China, India, Vietnam, Brazil, Mexico, South Africa and more, and the global integration of markets that ensued, resulted, very suddenly, in the vast majority of people living in regimes of economic freedom and with increasing political freedom, or, in China and Vietnam, under a system that has been termed “Market-Leninism.”

For France, which after 50-plus years of state-driven mollycoddling has become a nation of risk-averse functionaries, globalization has produced a terrible jolt. The French enjoyed the easy life: secure jobs, thanks to an inflexible labor market and protectionism, and in the last few years requiring no more than 35 hours of “toil” per week. Hence European enlargement and globalization tend to be perceived by the majority of the population as threats. Instead of reaching out, France has hunkered down. José Bové, the iconic moustachioed militant “peasant” leader, known for, among other things, having destroyed a McDonald's with a bulldozer and vandalized a Monsanto field of genetically modified crops, is also a presidential candidate and one of the most popular figures in the country: a contemporary Asterix!

If this aggressive inward-looking defensive stance were limited to “eccentrics” à la Bové, France would be okay; but it applies to virtually all the candidates, including the two main contenders, Nicholas Sarkozy on the right and Ségolène Royal on the left. Neither candidate has international experience, neither has studied abroad, neither can converse easily in English. In fact, never in the history of the 5th Republic has there been the prospect of so parochial a president.

Furthermore, although both campaigned in favor of “yes” in the referendum on the European constitution, both thoroughly understand the negative mood of the French electorate and play to it. The “no” vote had little, if anything, to do with the proposed constitution that few people bothered reading. It had everything to do with anxiety in the face of a challenging and disturbing world, including both Europeanization (integration + enlargement) and globalization. Although Sarkozy is much more pro-business than Royal, both rely on nationalist rhetoric in their economic discourse. Sarkozy also makes a big populist deal about opposing Turkey’s entry to the EU, while Royal has said she would respect the desire of the French on the subject, which translates into the same stance since polls overwhelmingly show strong popular resistance to Turkey’s entry.

Although some of the EU’s members are more open and globally oriented than France, this tends mainly to be smaller ones, such as Finland, Sweden and Ireland. Italy is in almost worse condition than France, and while German Chancellor Angela Merkel does her best to rouse her compatriots, it is more than an uphill struggle. The UK retains liberal credentials, but, alas, has been marginalized in the European debate and has lost legitimacy due to its ill-fated alliance with the US in war against Iraq.

All this hardly bodes well for the future of France or for the future of Europe. This in turn may have a negative impact on the rest of the planet. Europe cannot stop the process of globalization, but it can certainly slow it down considerably. France has announced it will veto any attempt on the part of the European Trade Commissioner Peter Mandelson to compromise on Europe’s staunchly protectionist agricultural policy in order to move forward the Doha Round. As the date of the French presidential election approaches and the candidates wallow in narrow parochial rhetoric, the feeling of melancholic loss on the occasion of Europe’s 50th birthday is all the more justified and all the more acute.

In any French presidential election scenario imaginable, one can expect a similar attitude over the coming years, as Europe continues its rudderless drift. These are not good omens for the globe.

Jean-Pierre Lehmann is professor of International Political Economy and the founding director of The Evian Group at IMD.