China already ranks its companies and citizens on social reputation, and plans to extend rankings to individuals and firms with China operations by 2020. Large firms can expect to be ranked on about 30 categories and as many as 300 requirements including licensing, tax payments, environmental protections, billing, logistics and more. China’s government regards the system as a prerequisite for opening its markets. “Negative ratings could mean penalties ranging from small fines, to exclusion from subsidies, to outright blacklisting,” reports Deutsche Welle. The EU Chamber of Commerce in China warns that the scores could mean “life or death” for companies, and those that do not prepare will be in for a shock. China announced plans in 2014, and multinationals already accept many restrictions and conditions to operate in the world’s largest market and second largest economy. The report warns companies to expect substantial data transfers on personnel and technology. Analysts suggest that the system could have a range of effects, form forcing companies to comply with China’s political aims to encouraging social responsibility. The system as a work in progress with revisions expected and procedures for objection and administrative reconsideration. The report also warns that the program will have impacts beyond China’s borders. – YaleGlobal

China prepares to assign "reputation" scores for individuals and companies for a massive database – the rankings will have impact beyond China's borders
Thursday, August 29, 2019 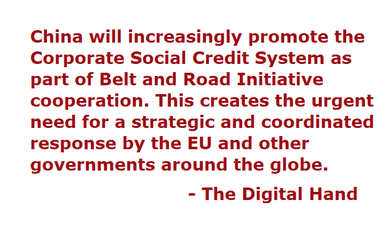 Read the article from Deutsche Welle about China’s social-reputation scoring system for companies.

“The System is part of a major shift in China’s market access regime. China continues to open its market to international players, moving away from hard market access constraints like joint venture requirements and investment catalogues, but at the same time, the Corporate SCS is emerging in the background to enhance the government’s ability to control companies’ behaviour. The lifting of hard market barriers can therefore be explained, at least in part, by the government’s growing confidence in its ability to influence companies, both foreign and Chinese, in a more nuanced way.”

Three steps to the ratings:

● Monitoring of foreign firms’ behavior in other markets, including relationships with Chinese firms even if they are not present in China, is possible.

● A comprehensive non-financial credit rating like the corporate SCS is envisaged to counter the dominance of Western credit-rating companies.

● Cooperation agreements and meetings on social credit have been held with Mongolia, Thailand, France, the Czech Republic, Saudi Arabia and other nations.