Citizens Fight Back with Cellphones and Blogs

In the past decade, advances in technology and communications have changed the way people live, connecting the world as never before. One currently-unfolding change is the way viewers experience the news: According to journalist Mark Glaser, modern tools - weblogs, cellphone cameras (both still and video) - are facilitating a new brand of citizen journalism. In the aftermath of the July 7 and July 21 London bombings, these devices allowed citizens to share their experiences, not just on personal websites, but on major television and media websites, which prominently displayed cellphone images and videos. In fact, Glaser predicts that the world may be witnessing the beginning of a sea-change in journalism. "The average person now has the tools to become a key newsgatherer, whom big media will ignore at their peril," he writes. Though citizen participation in mainstream media offers many advantages, it also entails risks, such as the verification of authenticity and invasion of privacy by "citizen paparazzi." Regardless of how these risks are addressed, Glaser is confident that citizen journalism will thrive: "The genie is out of the bottle and out of the centralized control of media companies, whether they like it or not." – YaleGlobal

Citizens Fight Back with Cellphones and Blogs 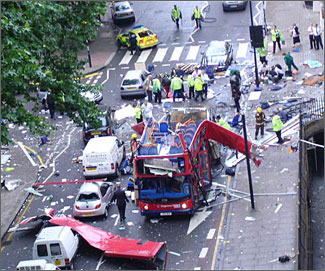 SAN FRANCISCO: In the media business, it's easy to talk the talk of citizen journalism, the idea that readers and watchers can provide their own eyewitness accounts using weblogs and cellphone cameras to transmit text, photos, and video. But only recently have media outlets started to walk the walk, leaning on people in the London Undergound for accounts of the bombings on July 7 and July 21.

And they provided more than just typical TV sound-bite accounts. Grainy cellphone videos were the first video shown on TV from the scene of the July 7 bombings, which killed 56 people. Their photos were quickly uploaded to the web, where bloggers passed them around. Their written accounts included moving stories of survival in horrendous situations.

On July 7, the BBC website prominently displayed a phone number for eyewitnesses to send photos of what they had seen. In 24 hours, the site received 20,000 written accounts via e-mail, 1,000 photos, and 20 videos. One of the site's main images that day was an amateur photo of the scene of the double-decker bus bombing. The BBC, the Guardian, and MSNBC.com were among the big media sites that walked the walk of citizen journalism, allowing their readers to become contributors on a moment's notice – with zero journalistic training.

The genie is out of the bottle for citizen journalism, and it's hard to imagine it going back in. The average person now has the tools to become a key newsgatherer, whom big media will ignore at their peril. But along with that power comes all the things – good and bad – that citizen journalism portends. While these citizen journalists will give news organizations millions of eyes and ears on the ground, they present a host of challenges for media outlets who must rein in the hordes, fact-check material, and promote newsgathering skills that do not border on voyeurism and bloodsport.

On the positive side, the proliferation of citizen media means the proliferation of new voices within the media business, which has been contracting due to corporate cost-cutting. While the BBC has been on the cutting edge of participatory media – involving readers and viewers in many ways – never before has it had the input of 20,000-plus on-the-scene reporters. Both the BBC and MSNBC.com gave particular citizen contributors the chance to write a daily blog – the equivalent of hiring a columnist, on the spot, for a one-week writing assignment.

As old media evolved before our eyes, new outlets sprung up to fill the gaps as the news broke. Wikipedia is a participatory online encyclopedia based on a wiki – a web page written by its readers. The Wikipedia entry for "7 July 2005 London Bombings" quickly became a useful resource to follow the number of casualties, transportation disruptions, and reactions from government sources. In two weeks, the entry was edited more than 5,000 times, with an accessible page "history" that tracks its evolution. Reading through those entries is like watching the sausage of news being made by a community, edited and massaged into a historical record.

If Wikipedia provided the textual home for bombing news, the online photo service Flickr became the visual hub. The service lets people upload photos easily and "tag" them with a description. Very quickly after the first London bombing, hundreds of relevant photos appeared on Flickr. While the collection was a bit haphazard, it visually brought the city to life on a day of chaos and tumult.

As during previous tragedies such as 9/11, online bulletin boards, chat rooms, and other net communities provided a place for people to grieve and discuss their horror. This time, the new wrinkle came from a site called We're Not Afraid (www.werenotafraid.com), where people around the world submitted pictures of themselves with those or similar words superimposed, showing solidarity against the bombings. After the July 21 bombings, the site's administrators posted a note saying they were getting 5 to 10 submissions per minute and were dealing with a backlog of several thousand images. This is a citizen media effort being run by citizens themselves on the spur of the moment of crisis.

But with the good of citizen journalism comes the bad. During the Southeast Asian tsunami last winter, fake photos made the rounds online. News outlets such as the BBC and MSNBC had to check the authenticity of what they received before posting images and words online. MSNBC, in fact, had to pull some comments from its site on July 7. As with all other user-generated content online, the site's editors must exercise extreme caution in allowing open forums that can easily devolve into one person's personal soapbox or a place for vulgar images or hoaxes.

When I contacted Andrew Locke, director of product strategy at MSNBC.com, he told me there still is an important place for professional journalists in the dissemination of citizen media. "We do present images from all of these new sources (including camera phones), and there is a place for unmediated sharing of imagery," he said. "But we feel our audience is looking to us to provide context, propriety and a high level of trust."

In other words, a site like Flickr might provide a sprawling view of haphazard photos, while a trusted news site can provide the valuable oversight of photo editors and other veterans who can highlight the best images. One might not be better than the other, but each will find its place in the new online ecosystem for journalism.

The technology of tiny camera- and videophones is a powerful evolution in the way we can capture and share our experiences in the world around us. However, the problem with this proliferation of electronic eyes is obvious: How do we have a modicum of privacy when everyone around us can snap our picture in a heartbeat? When survivors escaped one of the worst July 7 bombings, a blogger named Justin described how people with camera phones were trying to photograph the most gruesome scenes: "In crisis, some people are cruel," he wrote.

Even Dan Gillmor, founder of Bayosphere and author of the groundbreaking book, "We the Media," the bible of citizen media, was hesitant when asked about the "citizen paparazzi" at the scene. Gillmor says this is so early in the development of a cultural norm for behavior, that it's difficult to draw the line between capturing the scene and gawking. Perhaps in time, people with camera phones will develop an unwritten code of ethics, similar to the way people now will go outside restaurants or businesses to talk on their cell phones.

It's very possible that a news company, like NBC, might team up with a telecom company, such as Verizon, to allow cellular customers to transmit important photos during a crisis directly to NBC. That way, editors might more easily verify who is taking the photos and perhaps even pinpointing the person's location when they sent the photos.

But no matter the technology that makes it happen, citizen journalists will continue to be eyewitnesses to breaking news, and their accounts, photos and video from the scene will be crucial to telling the story as it unfolds. The genie is out of the bottle and out of the centralized control of media companies, whether they like it or not.

Mark Glaser is a freelance writer based in San Francisco, who writes a regular column for the Online Journalism Review (www.ojr.org), produced by the Annenberg School of Communication at the University of Southern California. His work has appeared in The New York Times, Los Angeles Times, The Nieman Reports, and Conde Nast Traveler.