The successful takeover of Europe’s biggest steel company, Arcelor, by Mittal Steel, whose owner was born in India, is a setback for economic nationalists and protectionists. Shareholders, who saw monetary and strategic worth in the Mittal-Arcelor merger, bucked a board of directors that resented any hint of foreign control. Such resistance is not limited to non-European partners. Cross-border mergers and takeovers remain controversial even within Europe, writes economist Patricia Wruuck, and politicans find such business decisions a tempting target for rallying workers who worry about a loss of future benefits or national control over traditional industries. But state intervention has problems, cautions Wruuck, especially considering that the governments have less information than the markets about the consequences of mergers. No country can provide a perfect bubble of protection for its favorite industries. Other nations retaliate, prompting a pointless race in adding trade barriers or subsidies that only cost consumers in the end. – YaleGlobal 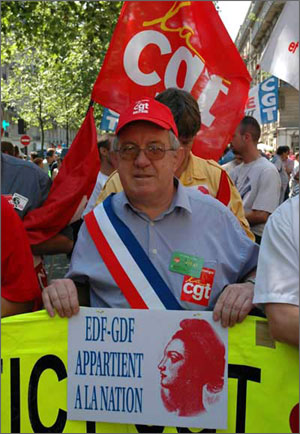 Fueling nationalism: The French proposal to merge state-controlled energy companies with a private firm to block foreign takeovers brought protesters to the street

FRANKFURT: The battle over Arcelor, Europe’s biggest steel company, was about more than a merger. The success of Mittal’s bid posed a setback to economic nationalists who seem to be on the rise lately. Arcelor’s shareholders accepted the bid of India-born Lakshmi Mittal despite the opposition of the board. This should be taken as an encouraging sign: Economic rationale defeated economic patriotism. Yet cross-border mergers remain sensitive and highly politicized – prompting politicians to interfere in business decisions.

Six months after his company launched a hostile takeover bid for the Luxembourg-based steelmaker Arcelor, Lakshmi Mittal finally succeeded. On June 25 Arcelor’s board agreed to sell the company to Mittal Steel for $32.2 billion. Mittal-Arcelor will be by far the world’s largest steel company in terms of output, revenue and market value. Shareholders approved of the deal because the two companies complement each other, both in the types of steel they produce and their geographical focus. In addition, the newly created giant will enjoy other advantages such as increased negotiating power with suppliers and synergies in purchasing, manufacturing and marketing. 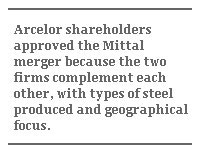 These tangible arguments persuaded shareholders to oppose the opinion of the board. Arcelor’s board tried various tactics to discourage the deal: First, the board changed the holding structure of Dofasco, a recently acquired steelmaker, turning it into a poison pill for Mittal, who planned to sell that part of Arcelor after the merger. Then the board tried to foster an alternative deal with the Russian steel company Severstal acting as a white knight. During negotiations, Arcelor’s Chairman Guy Dollé even dropped disrespectful remarks, hinting that Mittal Steel did not share European “cultural values,” criticizing Mittal for “mono-cultural management” and denouncing his bid as “monkey money.” The board lobbied for political support, but the results were mixed. Early on, the governments of Luxembourg and Spain, where major production sites of Arcelor are located, and France tended to oppose the deal. Later, officials were careful in publicly voicing their opinion.

On other occasions, politicians were more active. Last year, mere rumours of a bid from American PepsiCo for the French yogurt maker Danone caused the French Prime Minister Dominique de Villepin to embrace economic patriotism. PepsiCo never made an offer, but the fear of a takeover triggered new legislation making it easier to protect businesses in strategically-related sectors from foreign takeovers. For some, this may extend to “strategically important” yogurt-makers.

Even within Europe, takeovers and cross-border mergers remain controversial. To avert a hostile takeover of the French utility provider Suez by Italia-based Enel, the French government tried to broker a tie-up between Suez and the state-owned Gaz de France, immediately challenged by unionists for reducing the 80 percent government stake in the public company by more than half. At the same time, the Spanish government favored a merger of Endesa and Gas Natural – both Spanish companies – over a bid for Endesa by the German energy company E.ON. Both deals, still pending, cause much discussion within Europe: Many call for the state to promote national champions, while others raise concerns because these strategies harm the single market. At present, the most powerful measure at the EU Commission’s disposal for defending competition is to launch an infringement case against interventionist governments. 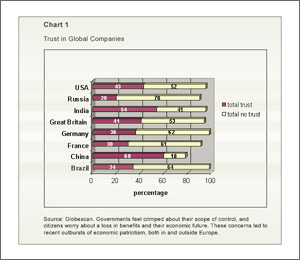 Ideally, a bidder’s nationality should not play a role in mergers, in particular within the European Single Market which guarantees explicitly free movement of capital. Apart from that, given global operations of big companies, national categories often no longer fit anyway. Economic patriotism and globalization don’t fit together, but the two are closely connected. Globalization creates opportunities for increased specialization, division of labor and productivity growth as well as pressure for adjustment, for instance in labor markets. Such changes can often be painful, making it tempting for governments to shield targets from competition and opt for protectionist measures instead. Fears of unemployment easily mix with security concerns and, unfortunately, also chauvinism. States have a vague feeling of losing sovereignty due to globalization. Governments feel crimped about their scope of control, and citizens worry about a loss in benefits and their economic future (see graph). These concerns led to recent outbursts of economic patriotism, both in and outside Europe.

The “economic patriotism” currently in evidence goes beyond classic protectionism and extends to industrial policy measures. The state aims to protect the domestic market against competition from abroad through classic obstructions, as well as presumes for itself the right to shape corporate decisions at home, for instance, by promoting national champions. The line between industrial policy in the sense of government influence at home and protectionism in the sense of trade barriers to the outside world is increasingly blurred. In addition, discussions about economic patriotism mirror the classic debate about how much state intervention is good for the economy: Is it the government’s task to “save” domestic companies from foreign takeovers, and what are the costs and benefits of these interventions?

In fact, the theoretical grounds for state intervention are narrow. Economic theory mostly confines state activity to creating framework conditions such as investing in infrastructure or basic education. If there is a functioning market, governments should not intervene, for instance, by supporting a particular company. Markets use information fast and flexibly, and constitute the most efficient mechanism to allocate resources. 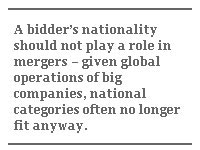 This point is a core problem of state intervention: Governments wanting to support individual companies or industries must make choices under uncertainty. As a rule, governments rely on less information than what’s available through the market process. Only under the assumption of market failure, economic theory provides a rationale for government intervention. If market imperfections exist, cases for intervention may arise. One prominent example is the aerospace industry where increasing returns to scale yield size advantages for companies operating under oligopoly. Here, governments can skew competition, for example, by giving subsidies to domestic producers. This is generally referred to as “strategic trade policy,” where governments deliberately influence strategic relationships between companies.

A number of problems are related to these interventions: Other governments may retaliate, and countries can get caught up in a subsidization race or reciprocal barriers. The selection of strategic industries can be prone to vested interests. In addition, politicians tend to select high-visibility image-building projects. Some officials also choose to denounce cross-border mergers in public, finding it easy to appeal to people’s fears, for example about job loss, and gain popularity. 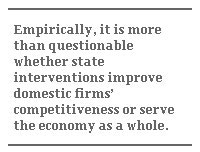 Empirically, it is more than questionable whether interventions improve domestic firms’ competitiveness or serve the economy as a whole. A recent study by Deutsche Bank Research compares different varieties of economic policy in Europe – ranging from relative openness to more frequent state intervention. The study finds no convincing evidence in support of economic patriotism. However, sound evidence exists for the fundamental importance of a liberal economic framework, showing that openness and competition have a beneficial impact on economic growth. This argument is confirmed by experiences with the European Single Market, where economic integration and increased competition have led to gains in economic welfare as well as lower prices for consumers.

Cross-border mergers are a sign of ongoing internationalization of business. More firms join forces to compete globally, including those from developing countries such as India and China. Foreign bids should be judged on their business merits, regardless of nationality. In this respect, politicians and business people should follow the example of Arcelor’s shareholders. Resorting to economic patriotism, raising barriers and shielding companies from competition is not a promising strategy because it only postpones rather than addresses change.