Free trade may offer macroeconomic benefits, but it also claims human victims – laid-off workers who are lucky to find new jobs for less pay. The developed nations of Europe, with established manufacturing centers and generous social benefits, employ a range of strategies to compete globally with nations that have lower wages and minimal social protections. The second in this two-part series analyzes how Denmark prepares its economy for globalization while protecting workers. With a deliberate response to globalization and a program called “flexicurity,” Copenhagen offers laid-off workers a generous social safety net. If old jobs prove to be lost for good, the workers must undergo retraining for new jobs at government expense. As a result, Danish citizens do not fear change. By taking a tough stance – allowing employers to hire and fire workers and requiring employees to undergo mandatory training – Denmark has achieved the highest unemployment rate in Europe and the most equal income distribution of any developed country. – YaleGlobal 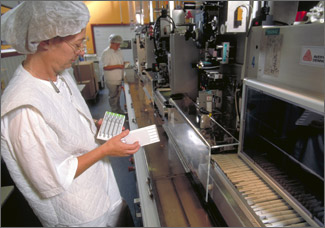 Vaccinating against unemployment: Danish workers in an insulin producing factory, with jobs secured by flexicurity

WASHINGTON: Sarah Surratt is a serial casualty of the trade wars. For 21 years, Surratt worked for Allied Signal in Kannapolis, North Carolina, until her job was moved to Mexico in 1992. She was lucky to snare an administrative assistant’s post at local textile maker Pillowtex. But in July 2003, she was again out of work, when Pillowtex, unable to compete with rising imports, shut down, laying off 4,800 people. Surratt then found work at a local community college, making 29 percent less than she did at Pillowtex.

Surratt is not alone. The average American who loses his or her job due to trade stands a one-in-two chance of making less money in a new position, assuming he or she can get one. In a recent study by the US Government Accountability Office of four plants shuttered because of imports, three of ten laid-off workers had not found a job after more than a year of looking.

Facing the likelihood of prolonged unemployment and a cut in pay, it is little wonder that American workers – and their counterparts in Germany, France and Italy among other industrial nations – worry about trade and its potential adverse impact on their lives and those of their families.

American economists and business leaders – and their soul mates in the UK – have long bemoaned such sentiments as rank protectionism. Preferring to focus on the benefits of globalization – the impetus to productivity brought by international competition and consumers’ windfall from lower cost imports – Anglo-Saxon globalization boosters have ignored the human and societal costs attendant with adjustment to more open economies.

American and British defenders of free trade argue that to compete globally, economies must be open, with highly flexible labor markets enabling them to adjust rapidly to changing commercial conditions. In today’s world, any attention to the needs of the losers is little more than a slippery slope to protectionism, a prescription for deadly economic rigidity and so very French!

But morally it is unacceptable that competitiveness trumps compassion. And practically it is possible to have an economy that is both successful in the global marketplace and socially responsible. Take Denmark. The Danes – in a policy response to globalization that they have dubbed “flexicurity” – have struck a successful balance between labor market flexibility and a social safety net.

Denmark’s payoff has been the highest employment rate in Europe, a dramatic drop in long-term unemployment and the most equal income distribution among industrial countries.

“Flexicurity” is a three-legged stool whose successful balance depends on businesses’ ability to hire and fire with ease, workers’ willingness to accept change and government’s provision of ample unemployment benefits and help with retraining.

Today, Denmark has one of the most flexible labor forces in the world. On an index developed by the World Bank, measuring the difficulty of hiring a new worker, the rigidity of rules on working hours and the costs involved in dismissing a worker, with a score of 100 being the worst, Denmark scores a 20, Germany 55 and France 66.

One reason is that the cost of a new hire in Denmark, in terms of taxes associated with bringing on a new employee, is just 0.7 percent of his or her salary. In Germany, hiring costs 21.3 percent of salary; in France, 47.4 percent.

And, unlike many European countries, Denmark has few labor laws. As a result, for more than three quarters of the Danish workforce it is possible for employers to vary weekly hours of work to allow for fluctuations in production.

In return for not resisting change, workers get a strong social safety net. The lowest paid laid-off workers in Denmark receive 90 percent of their lost income, while unemployment benefits for more highly paid workers decline proportionate to their previous earnings.

Despite such benefits, about half of those who register for unemployment are out of the unemployment system within six months and 70 percent find a job within a year. The US Department of Labor reports that the average unemployed person draws unemployment benefits for 15.9 weeks, but that does not reveal whether the worker found a job or not.

This success rate is, in part, attributable to the government’s tough-love approach with the unemployed. After a year without a job, people must enter retraining in another field. They have no choice. If they refuse to seek work, their benefits are cut.

The third leg of “flexicurity” is the Danish government’s commitment to provide workers with the retraining they need to upgrade skills or to find new employment. Companies can enroll workers in short-term retraining programs, with the government picking up the tab for the course and workers’ salaries. The government will also pay part of the initial salaries of unemployed people if an employer will take them on and agree to retrain them. Such benefits don’t come cheaply: Taxes equaled 49.6 percent of the Danish economy in 2004, compared with 43.7 percent in France, 34.6 percent in Germany, and 25.4 percent in the US.

As a result of such public support, a 2003 survey found that more than half of Danish workers had taken part in supplementary training or skill development over the previous 12 months, more than in any other EU country.

Better training has enabled firms to introduce new and more flexible types of work organization, helping keep Denmark globally competitive. For example, Unimerco, a Danish tool-making firm has evolved from making nail guns to producing highly specialized drills for the auto and aerospace industry. The firm was voted the best place to work in Denmark, for organizing production around small teams of workers, paying all production employees the same and allowing them to own half the company.

The price tag for “flexicurity” demonstrates Denmark’s commitment to a social safety net and constant upgrading of its workers’ skills. In 2003, Denmark spent 4.4 percent of its GDP on income maintenance and training. Germany spent 3.5 percent, France 2.95 percent and the US just 0.5 percent.

With the EU mired in slow growth and high unemployment and with its much-hyped recent efforts to bolster competitiveness in tatters, the success of the Danish economic and social model has attracted the attention of the European Commission. The EU plans a summit on “flexicurity” by the end of 2007.

But transplanting “flexicurity” is not easy. Former German chancellor Gerhard Schroeder aped Denmark’s reforms by cutting the duration of unemployment benefits. But those who administer the new German program are not nearly as tough as Danish labor counselors and, as a result, costs went up, not down. The French are trying to make it easier to fire young people. The result has been rioting in Paris.

Danes say their model won’t work if elements are cherry-picked. The lesson is that flexibility without meaningful security will be resisted.

At the same time, the globalization-induced pressure for both greater business flexibility and an enhanced worker safety net is being felt in the US, where long-term unemployment is rising and wages are stagnating.

Nevertheless, Denmark, as the quintessential social democratic welfare state, is an unlikely role model in a post-Reagan era that celebrates small government, low taxes and market-based solutions to economic problems. So, the Danish experience may ultimately prove more illustrative than prescriptive for the US.

Nevertheless, the Danish experience demonstrates that a more adaptable labor force supported by ample unemployment benefits and mandatory retraining is a boon for workers, companies and countries in an increasingly competitive international economy. Faced with the same globalization-driven market forces and social stresses, both non-Scandinavian Europe and the US would do well to consider their own variants of “flexicurity.”

Bruce Stokes, the international economics columnist for the “National Journal,” a weekly Washington public policy magazine, is also a journalism fellow with the German Marshall Fund of the US, which supported research for this article. He can be reached at bstokes@nationaljournal.com.