September 18, the date of the German elections, marks a crucial moment in European politics. The poll results will reveal whether the burgeoning protest movements will continue to nibble away at the mainstream parties. As Jonathan Fenby writes, moderate left-right political polarity in Europe may be giving way to a more fragmented system. Haunted by the specter of the ‘Polish plumber’ and threats to the long-cherished subsidized farming, Europeans are now turning toward more extreme protest parties – a rebuff to the incumbent governments' perceived complicity in globalization. Though the groups are numerous and quite diverse, says Fenby, "there is one common thread: fear – from worries about Muslim immigrants to concern about Chinese textile imports." The challenge for moderate politicians is to address these fears in a constructive manner, which takes into account the world's irreversible openness. "Otherwise," Fenby warns, "the protest bandwagon will roll on, to Europe's peril." – YaleGlobal 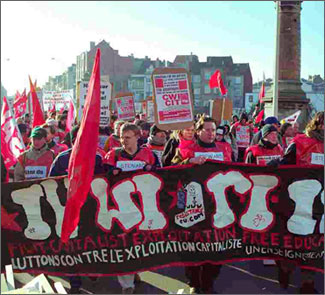 'No to capitalist exploitation': Impact of globalization is re-energizing European Left

LONDON: Europe's subsidized farming, trade barriers, immigration policy, and socialized economy have long been coming under the challenge of globalization. The most profound and long-term effect may actually be a serious fragmentation of European politics. A division between moderate right and moderate left has marked the continent since the end of World War II; this polarity is now giving way to a much more complex patchwork in which compromise and politics are becoming increasingly difficult to achieve. Electoral campaigns in major European nations demonstrate the new power of hitherto marginal groups against the establishment.

Once, groups challenging the system were a passing phenomenon - and marginal in their effectiveness. Now, they may attract as many votes as traditional conservatives and socialists – a great day for those who want to see a thousand political flowers bloom, not so good for effective government that can deal with today's problems.

In Germany, a collection of Marxists and rebel Socialists has founded a new movement, called simply the Left Party, for the September 18 national election. Its leader, former Finance Minister Oskar Lafontaine, says he would not work with Chancellor Gerhard Schröder's Social Democrats, even if this were the only way to stop the center-right Christian Democrats gaining office.

After an initial burst, the latest surveys show the Left slipping slightly, but it still has as much backing as the main pro-business party, the Free Democrats, with which the Christian Democrats plan to form a coalition. Most ominously for the Social Democrats, Lafontaine and his co-leader, former Communist chief, Gregor Gysi, may carve into the 11 million voters in the economically depressed former East Germany.

In France, anti-establishment parties ranging from Trotskyites on the far left to the National Front on the far right lined up successfully against the proposed European Union (EU) Constitution in a May referendum, repeating the shock of Front candidate Jean-Marie Le Pen's appearance in the 2002 presidential election run-off. Former Prime Minister Laurent Fabius, meanwhile, has been expelled from the Socialist Party leadership for his euroskepticism, leaving the orthodox left deeply divided in the run-up to the presidential poll in 2007. A recent survey showed the young Trotskyite leader, Olivier Besancenot, to be more popular than President Chirac.

In Italy, the main regional party, which wants the north of the country to have more autonomy from Rome, forced its way into Silvio Berlusconi's ruling coalition, along with rightists whom some see as the heirs of Fascism. In Holland, where voters also rejected the EU Constitution in a referendum, politics has become steadily more fragmented, while Belgium teeters on the brink of a split between French and Dutch speakers.

While Tony Blair continues to dominate British politics, some of the most effective opposition comes from left-wingers who think he has gone too far in rehspaing the Labor Party. Meanwhile, the biggest protest party of all – the abstainers – makes itself felt everywhere, further reducing the credibility of those elected by a diminishing slice of the eligible electorate.

Much of the protest message is incoherent or wishful thinking; arguments advanced by opponents of the EU Constitution in France ranged from warnings about the end of border controls to claims linking the document to a rise in energy prices.

Responsibility does not enter the picture. Most of those who vote for the extremes do not expect them to take office. Nothing beyond their protest profile links Le Pen and Lafontaine, or Besancenot and the anti-immigrant movement in the Netherlands.

But there is one common thread: fear – from worries about Muslim immigrants to concern about Chinese textile imports. At its root is a feeling that Europe is at risk from globalization, that the nation-state no longer protects citizens as the world moves in directions that threaten farmers, public sector employees, and industries from steel to garments. It would be an exaggeration to draw parallels with the climate which fuelled Fascism between the world wars, but there are common strains: economic worries, unemployment, nationalism, contempt for the establishment, and, in some cases, racism. Internationally, extremes of left and right unite in denouncing the war in Iraq and cluster round the totem pole of anti-Americanism.

The incumbent leaders' reactions are often viewed as too little, too late. The anti-Constitution referendums showed a clear disjunction between rulers and ruled. EU enlargement is a source of further worry, given the region's low competitive cost base; the phantom figure of the Polish plumber driving his van across the old member states taking jobs from locals, has become a continental bogeyman.

The sluggishness of the continental economy opens governments to the charge of incompetence. The ultra-orthodox anti-inflationary policies of the European Central Bank, guardian of the euro common currency, have damped down expansion. Criticism, notably from France, of "liberal Anglo-Saxon economics" cannot mask the issue of how well the post-war continental model is working in the new century.

The jumbled nature of Europe's protest politics makes it very hard for orthodox politicians to grapple with. Laying popular myths to rest is always difficult, particularly when they are relentlessly pushed by demagogic tribunes. The discredit of the political class undermines government – fuelled by grave doubts about Blair's claims on Iraq or allegations of misuse of public funds by Chirac. Matters are aggravated by the readiness of some leaders to grasp nationalist approaches.

The Left Party in Germany may lose its momentum; the French Trotskyite leader may be perceived as a hopeless dreamer; the Italian left may find its unity and return to office in elections next year. But the process of maverick protest – often for its own sake – has become alarmingly widespread.

The upcoming German election will be a major test. If the Christian Democrats and their allies do not win the majority that should be theirs for the taking, a "Grand Coalition" with the Social Democrats may be the only way of handling the volatility in what had been one of Europe's calmer political entities for decades. After that, the next test comes with the Italian election in 2006, followed by the French presidential race in 2007, wherein the major question will be whether the most popular figure on the center-right, Interior Minister Nicolas Sarkozy, can turn his high opinion poll rankings into a coherent program to handle the country's economic and social problems.

For the most part, the protest parties look backwards, toward a world where they believe there were fewer problems, people were better cared for, and nobody had to worry about competition from low-cost manufacturers on the other side of the globe. The challenge for the likes of Sarkozy and the Christian Democrat leader, Angela Merkel, is to forge an agenda that can win elections – and make sense in an open world. Otherwise, the protest bandwagon will roll on, to Europe's peril.

Jonathan Fenby is Editorial Director of the predictive news service, earlywarning.com, and author of On the Brink, The Trouble with France (Abacus paperback).