In a bold statement of its foreign policy independence, the European Union recently announced plans to lift the arms embargo on China. Now, leaks from Britain suggest the EU is having second thoughts. Although the European backtracking is seen as the result of US pressure, writes policy analyst François Godement, Europeans have their own reasons to reassess their decision. Any EU decision must tread delicately around US concerns over China's rapid military buildup and possible armed attack on Taiwan. Still, Godement notes that "charting an independent course, whether in tandem with the United States or in partial disagreement over interests or strategic judgments, is a pre-condition of European foreign policy." Learning to find compromises among the EU's 25 members is a daunting reality test, indeed. But as Godement concludes, "This is clearly the price to pay in order to be taken seriously by the United States - or by China, for that matter." – YaleGlobal 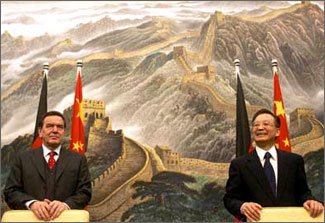 PARIS: After raising the banner of independent foreign policy by their decision to lift the arms embargo on China, the European Union seems to have second thoughts. Although no official announcement has been made, leaks from Britain suggest the move is off - at least for this year. And European leaders would do well to use the time to examine their own differing perspectives on arms sales and the value of coordinating their East Asia policy with the United States.

What lies behind Europe's change of course? Obviously, pressures from Washington have played a role. More than the argument about the human rights situation in China, the Bush administration pointed to two significant factors: a potential conflict around Taiwan, where European weapons might one day be used against US soldiers, and the general risk of transferring sensitive technologies to China's military establishment, whose expenditure growth rate is the highest in the world.

However, it is not US arguments or pressures that are cited in Europe for the change of mind. Instead, one hears speculation about different motives. The British do not want to see the embargo lifted on their watch, as the UK will chair the European Union in the second half of 2005. The attitude of the United Kingdom is a key factor, indeed. With large financial interests in China, a powerful arms industry looking for markets (but heavily linked to the Pentagon), the Blair government has always practiced a constructive engagement policy, avoiding conflict with Beijing. By reversing itself, the UK not only loses that position, but also appears to have misled the Chinese into complacency. In the end, too much skillful maneuvering may backfire against a diplomacy that seems to waver in the wind.

China, meanwhile, is seen as having shot itself in the foot by passing an anti-secession law that threatens Taiwan and highlights the danger of arms sales - but the legislation could be more a pretext than real reason. While some of the language of the Chinese law hints again at the possible imposition of a timetable for reunification, the military threat over Taiwan is nothing new, and should have been considered by Europeans as the basic issue in resuming arms sales to China. Europe's previous indifference led the Chinese government to believe it could afford to pass the law; Beijing has failed to address the human rights issue through any concessions during the past year - with the lone exception of a recent release of an Uyghur businessperson on the eve of US Secretary of State Condoleezza Rice's visit.

The major European governments had increasingly converged in recent months over the lifting of the embargo. Europeans have also noticed an unintended benefit from the spat with the United States over China. As with all transatlantic disputes, the debate with the Bush administration has created in effect the beginning of a strategic US-EU dialogue on China and East Asia - something to which Washington has never consented in an area of its historic pre-eminence.

However, comprehensive consultation over arms exports and dual technology transfer to China would result in a permanent process of give-and-take, which may not be what the Europeans want. Among EU members, there are huge differences of interests, primarily between those countries with a substantial arms industry and those without such a base. Europeans do not want their choices taken hostage by the United States, especially considering commercial implications. Washington may demand a level of scrutiny and authority over European decisions that the EU would deem unacceptable. And, further, China may not be satisfied by the prospect of trading an "outdated" embargo against a strategic and arms export coordination between Europe and the United States. In fact, recent Chinese pronouncements stated that they would not increase their arms purchases from Europe; that statement was unlikely to evoke the enthusiasm of Europe's weapon manufacturers, whose biggest export market remains by far the United States.

Lifting the embargo in this context became just what French President Jacques Chirac had predicted: a "symbolic decision" and a self-defeating exercise. From the start, European advocates of lifting the embargo made two crucial mistakes in failing to address the circumstances. First, they treated the Taiwan issue as a mere side-show: They ignored that in spite of the One China principle, Taiwan's status is not a question of the past. Instead, it is a question of the future, and its resolution will shape the architecture of East Asia. If the cross-Strait conflict is resolved by force, China's rise will be challenged by a large maritime alliance; if protracted negotiations and mutual concessions take precedence, however, China's influence will rise throughout the region. Giving in to Beijing without seeking assurances regarding Taiwan's future was tantamount to selling short European positions. The second critical mistake: taking a loud, principled stand on the embargo issue. Though the public campaign may have brought short-term benefits on the diplomatic circuit with China, France and Germany completely expended their political capital. As a result, other parties may be better suited to impose conditions on the actual decision, and perhaps even to extract future concessions from Beijing.

But there were other issues to consider, as well. First, Europe cannot sell weapons or dual technologies without conditions and reassurances on its use. To avoid its arms sales reduced to a solely commercial policy, Europeans must get involved over the treatment of the Taiwan question. Second, Europeans must forge a collective doctrine on Asia-Pacific strategic issues, which have largely been out of bounds of European decision-making. Third, EU leaders must seek a practical mechanism to deal with the United States, ensuring that Washington accepts open discussion and mutually binding decisions.

China's disregard for European calendar and sensitivities was already apparent in the strong language used by its first policy statement towards the EU in October 2003. This is the excuse Europeans needed to pause, fully consider its stance, and strike a better balance with the United States. They can't afford to stand still, however. The next developments will serve as a pointer on future European foreign policy and security developments. Backtracking on the principle of moving beyond a sanction regime in the near future - and, importantly, deferring to US pressure - could prove disastrous for Europe's foreign and security policy. Charting an independent course, whether in tandem with the United States or in partial disagreement over interests or strategic judgments, is a pre-condition of European foreign policy. Establishing legitimate institutional coordination of very complex issues such as arms export regimes and learning to find compromises among 25 countries in an area still at the heart of national sovereignty will be a daunting reality test for European policy. This challenge is clearly the price to pay in order to be taken seriously by the United States - or by China, for that matter.

The United States has clearly won a political battle in the short term. And it would behoove Washington to also pause and reconsider its approach. Retreating from increased political and strategic dialogue with Europe over Asia-Pacific issues - remaining in effect the sole judge of policy decisions affecting relations with China and Asia - would, in fact, further weaken US-EU relations. In the end, rethinking by both parties could strengthen the transatlantic ties.

François Godement is Director of Centre Asie at the Institut Français de Relations Internationales in Paris.