Europe’s working-age population is aging and falling in numbers, and the continent needs workers to do jobs that Europeans either will not or cannot do. Meanwhile, half of Africa’s ever-growing population is under 17 years of age, with many living on less than US$1.20 a day. Such potent conditions are building an immigration crisis in the European Union, the physical evidence of which can be found in the Spanish-owned Canary Islands, where 10,000 Africans have been caught this year after braving the 1,000-kilometer journey from the African Coast. The crisis poses tough political, economic and humanitarian questions for Europe’s policymakers. Knowing that a “fortress Europe” would not survive in a globalized economy, politicians must also respond to citizens’ concerns that immigrants drain an already-fraying social net or take jobs in countries with high rates of unemployment. Other critics denounce European governments’ attempts at selective immigration – welcoming only the most educated or talented – and assert that the only way to stem the tide of illegal immigration is development and aid for Africa. Failing to reach consensus on policies, Europe remains a patchwork of oft-contradictory immigration policies, setting the stage for “further and bigger tragedies.” – YaleGlobal 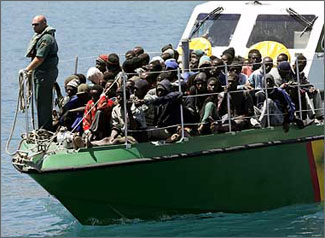 PARIS: Desperate Africans pack into fragile fishing boats, tossed by Atlantic waters off the Canary Islands – since early May those images clash on European television screens with those of African players competing in German stadiums for the soccer World Cup. Those players, who work for many of Europe’s best soccer teams, embody the “chosen immigration” advocated by French Interior Minister Nicolas Sarkozy, while the Canary boat people raise the specter of an unmanageable northern rush by fugitives from the failed, overpopulated, impoverished states of the African continent. Europe sees immigration as both an economic necessity and a social threat.

A consensus exists within the European Union that there should be no such thing as “zero immigration,” that Europe needs to define rules for a controlled, demand-led immigration on the model of countries such as Canada or Australia. But “national sovereignty” concerns, growing political pressures from anti-foreign sentiment and institutional paralysis since last year’s rejection of the proposed Constitution prevent the EU from agreeing on common immigration policies. The EU leaves the door open to calls to build an illusory “Fortress Europe,” which could ultimately threaten democracy. By failing to tackle the problem, the EU is fueling an anti-immigrant backlash.

So far this year, more than 10,000 African immigrants have reached the shores of the Canary Islands. An unknown number have drowned attempting the crossing. Part of Spain, the archipelago beckons to would-be immigrants as a gateway to Europe. For the first time in its history, the EU external border security agency, Frontex, has deployed a multinational air-and-sea armada, provided by eight member states, to monitor and intercept boats leaving the coasts of Senegal, Mauritania or Cape Verde. Immigration topped the agenda of the June EU summit, and the countries agreed to set up “rapid intervention teams” to confront the waves of illegal immigrants.

The crisis in the Spanish archipelago is but the latest flashpoint in an ongoing drama. In the last two years, the Spanish enclaves of Ceuta and Melilla on Moroccan territory as well as the Italian island of Lampedusa, and Malta – all have faced an unending tide of starving, thirsting illegals arriving by the boatloads, trying to rush land barriers erected to stop them. Recurrent tragedies are only the spectacular tip of the iceberg of a much bigger wave of illegal immigration. Numbers are hard to come by, but according to European Commission figures, more than 300,000 immigrants, many from Africa and the Middle East, overstay tourist visas each year and join the masses of illegal immigrants living and working within the EU – up to 8 million according to the latest estimate by the Office of International Migrations.

On one shore, on a continent torn apart by poverty, disease, violence and corruption, a demographic and social time bomb ticks: half of Africa’s 900 million and growing population is under 17, and 40 percent live on less than $1.20 per day. On the other shore, a rich and fast-aging Europe needs workers for the three D's of its labor market – dirty, dangerous, degrading jobs. According to a January 2006 Green Book published by the European Commission, Europe’s working-age population will drop by 20 million by 2020 even with the present rate of immigration. The corresponding fall in competition and productivity will diminish EU wealth and standard of living

Home Affairs and Justice European Commissioner Franco Frattini rightly concluded in October 2005 that “the walls of the European fortress are crumbling” and warned that “Europe cannot any more oppose barbed wire to desperation.” But the continent can't throw open its doors to all comers. Immigration, long the pet subject of far-right organizations, has become in most European countries a “bread-and-butter issue,” in the words of British Prime Minister Tony Blair. Immigration stirs social tensions generated by high unemployment and weak economies, fear of the social impact of globalization and EU enlargement, failure of integration policies and debates on multiculturalism and – since the Madrid and London bombings – threats of Islamist terrorism. According to most polls, over 60 percent of European citizens think that “there are now enough foreigners” within the Union.

French opponents to the proposed European Constitution made efficient use of “the Polish plumber,” an ideological scarecrow embodying the fear that a flow of cheap labor, then coming from new and poorer East European members of the Union, would depress wages and weaken social protections. Fears of massive Turkish immigration also contributed to the treaty’s rejection. Europe's economic predicament is dire, more than that of the US, which confronts its own immigration crisis, because EU immigrants, legal or not, can enjoy the benefits of an already-fraying social safety net. Social tensions thus fuel the rise of xenophobic, populist groups, which in turn push governing parties to come up with tougher immigration policies.

Reforms have recently been introduced in the UK, Germany and France – by far the three main destinations of immigrants – as well as Denmark, the Netherlands, Austria and Italy, which all aim to put a brake on immigration and control it. The new French law voted in June by Parliament, envisions a selective, skill-based immigration and a system of quotas. It cracks down on illegals, restricts family-reunion immigration, and requires would-be immigrants to take language and civic lessons. Criticized by human-rights advocates, immigrant-support groups and religious leaders, the policy also infuriates leaders of African states who denounce Sarkozy's “chosen immigration” as a racist “neo-colonial” policy, an attempt by rich countries at shopping for brains and hands to sustain their own prosperity, while building walls to keep out the huddled masses whose remittances are a major source of income for their native countries.

Every European leader agrees with French President Jacques Chirac that “any solution lies first through development” in Africa and must include massive aid. But chasing and deporting illegals, making immigration more difficult, is politically much easier than budgeting more money for aid to Africa. Another obvious problem is that Europe lacks a continent-wide policy to handle illegal immigrants. Frattini acknowledges that “the EU has absolutely no power over questions of immigration.” Any decision in the areas of security and justice, control of the 91,000 km of the EU sea and land borders, a unified EU visa, or repatriation of illegals requires unanimous consent. But each state jealously guards its right to enact and enforce national laws on immigration.

Mass legalizations of illegals by Spain and Italy in 2005 and 2006 caused an outcry in neighboring countries, where a number of these immigrants end up. Attempts in 2004 by Germany and Italy to set up holding centers for immigrants in “stopover” countries – Libya in particular – were shot down by other EU states. Last month, the EU 25 failed to agree on a list of “safe” countries whose citizens could be deported without putting their life or freedom at risk. Governments are reluctant, for domestic political reasons, to push for common answers to this global challenge, even though not one European leader, regardless of political stripes, believes his or her country could manage in a globalized economy by trying to seal off its borders. Immigration may well turn out to be Europe’s major issue in the near future, but the paralysis of the Union in front of this coming storm portends further and bigger tragedies.

Patrick Sabatier is a columnist for “Liberation.”