Is France Cooling Toward Its Arab Friends?

During the Cold War, France emerged as a Western advocate for the interests of the Arab world. Although conventional wisdom ascribes this special relationship to economic and political calculations, foreign affairs specialist Pascal Boniface argues that France’s motivations are more complex. A number of strategic concerns have been at the root of the French-Arab alliance since 1967. Good relations with developing countries give an aura of independence from the US, part of France’s long struggle to maintain international influence in a bipolar or unipolar world. However, because the nature of the relationship is based on strategic rather than ideological concerns, such alliances remain contingent on continued usefulness. The current presidential campaign has brought to light shifting strategic appreciation of relations with the Arab world. While former President François Mitterand’s personal support for Israel did not alter the balance of French foreign policy toward the Middle East in an unaltered strategic perspective, the diversity of strategic views among the current candidates for president – combined with an insular outlook that increasingly marks France – suggests that the country’s longstanding special relationship with Arab nations could be in for some cooling. – YaleGlobal

Is France Cooling Toward Its Arab Friends? 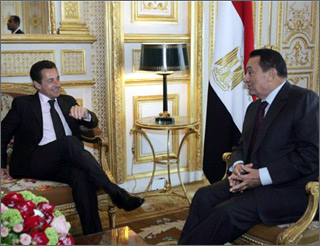 Egyptian President Hosni Mubarak. Will he change the traditional pro-Arab

PARIS: France is often described as having a special relationship with the Arab world. Paris is widely seen as the Western advocate for Arab people. But that could change with election of a new president in May.

Some people summarize the French Arab policy as being a “weapons for oil” policy. It is a simplistic representation, probably motivated by ill will toward France. According to this thesis, France supports Arab positions for commercial reasons, to have a better access to Arab markets. Another motivation would be the large Arab-Muslim minority living in France, estimated to be 5 million people out of a total population of 62 million. But the roots of any French pro-Arab positions stem less from electoral or commercial motivations and are primarily strategic.

During the Fourth Republic, 1946 to 1958, many onlookers perceived France as anti-Arab. Since 1954, Paris had been at war with Algerian nationalists. In 1956, France, the UK and Israel launched together the Suez campaign to defeat the growing Arab nationalism threatening to nationalize the Suez Canal. During this time, France was Israel’s closest ally, helping it acquire nuclear weapons.

The 1967 Arab-Israeli war was a turning point for French-Arab relationships. Charles de Gaulle blamed the Israeli government for bearing the responsibility of the war. Despite strong internal opposition – the French strongly favored Israel – he broke the privileged alliance between France and Israel, and predicted that the occupation of the Palestinian territories would bring new problems instead of solutions to the Israeli-Arab conflict. The French position on the Israeli-Palestinian conflict has been constant since 1967, during a time when neither Arab money nor Arab voters were important.

After the 1973 war and the oil crisis, French-Arab relations underwent impressive development in both economic and strategic areas.

Paris and Arab countries had complementary interests. A Western country and not part of the communist global alliance, France also had the advantage of a solid political independence with respect to the US, according to Arabs.

But strategic motivations were more important. Development of relations with Arab countries was a way to reinforce breathing room from superpower influence for France. It was a way to project within the Arab world the traditional French diplomatic guidelines: promoting a French version of universal values and giving more leverage to French diplomacy by establishing strong links with developing countries.

Election of François Mitterrand as president in 1981 and 1988 caused worries in the Arab world. He was considered a strong friend of Israel, and some expected France to change policy and return to the pro-Israeli diplomacy of the Fourth Republic. Mitterrand did indeed take a strong position in favor of Israel’s right to live in security within internationally recognized boundaries, but was also the first Western leader to declare support for Palestinian self-determination, a right to have their own state. Moreover, France saved Yasser Arafat’s life in 1982, protecting him against Israel and Syria.

In the 1990s, France strongly condemned the Iraqi invasion of Kuwait and took part in the war, only after Saddam Hussein refused all proposals of mediations or peaceful solutions and passage of a UN Security Council resolution. In 2003, as the US prepared to invade Iraq once again, France was a leader of the antiwar movement, although its goal was not to protect Saddam and his regime. Jacques Chirac thought that launching a war at that moment, without clear evidence of weapons of mass destruction, without any link between Saddam and Al Qaeda, and without progress in the Israeli-Palestinian conflict could only fuel antagonism between the Muslim and the Western worlds and instead turn out to be a gift for Al Qaeda.

French policy toward the Arab world is a classical approach combining national interests, strategic perceptions and debate on values. A permanent member of the UN Security Council, France has strong interest in promoting the UN and international law. France’s own experience with an unwinnable war, after Algeria sought independence in 1954, has led it to regard military occupation as a dead end. French leaders have long understood that the Palestinian cause resonates in the Arab and Muslim worlds, and that Paris has a special role to play in the Arab world, due to its independence with respect to Washington.

As the French presidential election approaches, there is still no open and clear debate on international policy and the future of French policy in the Middle East. The topic is hardly perceived as minor. There is a large consensus that the Israeli-Palestinian conflict is a major issue in international security and that France’s international prestige is at stake in this area. 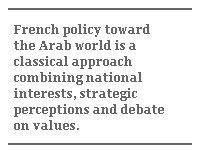 It is true that a part of the Jewish community, estimated at 600,000 people, increasingly consider candidates’ attitudes toward Israel as a main criterion of their vote. Likewise, the Palestinian issue could influence a part of the Muslim vote. Muslims link their own social difficulties with the fate of the Palestinians. Though Muslims far outnumber Jews in France, their social and political weight is minimal. Unlike the attitude in 1967, the majority of French people, regardless of origin, tend to place blame for the ongoing conflict on Israel rather than the Palestinians.

Yet political leaders in France resist outspoken criticism of Israel, out of fear of being labeled anti-Semitic. Many who are highly critical of Israel in private conversations prefer to be lenient and apologetic in public.

After the resurgence of violence in the Middle East, one witnessed the rise of anti-Semitic acts in France, with about 400 anti-Semitic physical or verbal actions registered annually, and a deterioration of the intellectual climate. The accusation of anti-Semitism has been widely used against anyone who expresses any criticism about Israeli government policy.

The centrist candidate François Bayrou has expressed little consideration for the Palestinian fate and has thrown his support to Israel, though he recognizes the legitimacy of Palestinian aspiration to achieve statehood.

Fault lines for this issue are drawn not between but within the two main parties, the right-wing UMP and the Socialist Party. Inside each, there are so-called pro-Palestinian and pro-Israeli supporters.

Ségolène Royal, the Socialist candidate, went to the Middle East to acquire an international stature, but with mixed results: critical of Israel while in Beirut and understanding while in Jerusalem, she disappointed the pro-Palestinian segment of her party. In the end, she constantly refers to international law, a message viewed as favorable to Palestinian arguments. 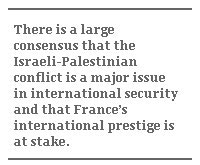 On the other side, Nicolas Sarkozy is largely considered as pro-Israel. He visited Israel several times, but never the Palestinian territories. He blamed Hezbollah for the Israeli-Lebanese war, though he qualified that by describing the Israeli reaction as disproportionate. A supporter, Deputy Minister Christian Estrosi described Sarkozy as the "natural Jew’s candidate" – a statement considered careless by many, including some French Jews. Nevertheless, Sarkozy is popular in Israel, unlike Chirac. Even some French intellectuals and celebrities typically viewed as left-leaning express a preference for Sarkozy, based on his pro-Israeli position regarding the Middle East conflict.

With Royal’s popularity sinking and the rising fortune of pro-Israel Bayrou and Sarkozy French policy toward the Middle East may be reaching a crossroads. Forty years after de Gaulle’s strategic move regarding the Middle East, the world could witness a reorientation of the French international policy.

Pascal Boniface is director of the Iris Institute for International and Strategic Relations. He has published or edited more than 40 books on French foreign policy, nuclear affairs and other strategic issues.