France Hopes to Block the Wave of Globalization

Job outsourcing has figured prominently in worldwide economic discussions, and the French government has taken a decisive, though controversial, step to address the phenomenon. In an effort to protect domestic employment, Prime Minister Raffarin announced a large subsidy for companies refraining from relocation. Honorable intentions aside, writes global Ashutosh Sheshabalaya, France may be shooting itself in the foot. China and India, with their rapid economic growth, will define the 21st-century global marketplace. And France's recent protectionist policies, argues Sheshabalaya, fail to consider their self-isolating effects in a changing world economy. If the government truly intends to maximize its competitive strength, it should craft strategies to incorporate IT offshoring - instead of trying to fight the inevitable. -YaleGlobal

France Hopes to Block the Wave of Globalization

The government plan to stem the flow of jobs abroad could be a futile last stand against the 21st Century
A. Sheshabalaya
Monday, September 20, 2004 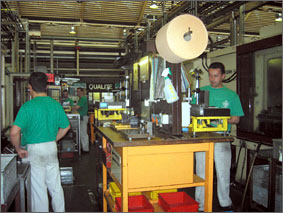 France faces the 21st century: A factory from Alsace is relocated in low-wage Rumania.

BASSILLY, BELGIUM: On both sides of the Atlantic, politicians - especially the ruling party in France and the Democratic challenger to the US president - have been fretting about the outsourcing of jobs to the developing world. France, however, has taken a significant first step.

Amidst clearly rising public concern about the issue, the French government last week announced a billion-euro kitty to dole out to companies pledging to keep jobs at home for at least three years. Although the mechanics for monitoring and enforcing such a pledge remain nebulous, "the main point," according to Prime Minister Raffarin, "is the launch of a national effort" against relocation. A wider examination of the global marketplace may reveal that, despite intentions of bolstering the French economy, protectionist efforts may instead hinder the country's progress.

Such exercises have precedents, most notably in Europe's 1970s and 1980s struggle against the emerging Japanese car industry. However, the global forces in play now are more powerful. Rather than relocating lingerie factories to Morocco or auto parts makers moving to the low-cost Czech Republic, today's challenge principally consists of facing the rapidly rebounding China and India. Together, the two, respectively the world's fastest and second-fastest growing economies, have eighteen times Japan's population, purchasing-power-adjusted gross domestic product (GDP) nearly equal to that of the US, and a clear determination to return to their 19th century status, when they accounted for almost half of world economic output.

In spite of some major differences, the two Asian giants have struck an entente cordiale of sorts, to avoid competing with one another. India has become the global white-collar services center, while China focuses on blue-collar manufacturing. As each learns from the other (mutual trade has grown 35 times over the past decade), these two countries will clearly be drivers of the 21st century. No less than 70 percent of relocated American jobs forecast by research firm Forrester, for example, are headed to India alone.

The real victims of protectionist reflexes in the West, as displayed in Paris last week, will be Western companies and those who seek a meaningful place in a changing world. In France, companies hoping to become, or remain, world-class, require clarity about their global playing field. Given the uncertainty created by the latest anti-relocation subsidy, their perspectives will become muddled. In the name of opposing off-shoring, French businesses may be discouraged from investing in China and India and may thus lose to competitors who are not required to territorially truncate manufacturing supply chains or software service processes.

Fatefully, such competitors are now also emerging out of India, which has begun to redefine the global corporate landscape, well above the factory floor. Following software, pharmaceuticals and biotech are now in India's sights, as well as the higher-value design segments of classical blue-collar manufacturing industries, such as textiles and auto-components. In the first half of this year, Indian companies made major, value-accelerator acquisitions in Europe, picking up the generic drugs business of France's Aventis (pharmaceuticals) and acquiring Trevira (textiles), as well as Carl Dan Peddinghaus and Dana Spicer's UK-based precision forge unit (auto components). But they have also gone beyond Europe, to oil and gas in central Asia, mines in Africa, steel in Southeast Asia, truck companies in South Korea, and undersea telecom infrastructure in the US. It is unlikely that France's industrial policy pundits, looking into their rear-view mirrors, have any idea about what to do with these new actors. Are they opportunities or threats?

More troublingly, the French national effort against relocation involves the creation of "competitiveness zones," which are heavily subsidized clusters of local companies. Such a move closely echoes past attempts to sculpt global market forces in France's (and Europe's) own image, among them the Eureka program on high-definition television (abandoned in 1993 after a seven-year effort) and hundreds of other European Commission-funded R and D projects that have disappeared without a trace. A wand is not required to see that a close cousin to the concept of "competitiveness zones" is the 1980s policy of "national champions."

Today, one such champion, France's struggling Groupe Bull, proves that the zero-sum impact of protectionism is felt most strongly at home. While hundreds of millions of taxpayer euros continue to provide life support to this terminally-ill computer behemoth, France Telecom, one of Bull's principal shareholders, announced 15,000 lay-offs in a January 2004 restructuring plan. By comparison, in the call center business, one of the segments considered most vulnerable to relocation, only 300 centers - with a total of no more than 12,000 employees - are "considering" relocation, according to a survey published in June by France's authoritative Cesmo consulting firm.

Indeed, this is the underlying message from the 21st century. Europe may have mastered the art of strong-arming a poor African or Latin American country to buy its subsidized sugar, butter, and chicken soup cubes; however, the collapse of the World Trade Organization's Cancun summit because of stubborn opposition from developing countries offers proof of a decisive shift in the global balance. The damage that countries like India and China may do to France, for example, by a "national effort" to favor Boeing over Airbus, will far outweigh the benefits of anti-off-shoring subsidy.

There are, however, real options for France (and Europe) to gracefully participate in the 21st century, rather than being dragged, kicking and screaming, into it. Rather than identifying centers of excellence in "competitiveness zones," the one billion euros could also be meaningfully deployed to study exit strategies from areas that cannot any longer stake a claim of excellence, or worse, which have become irrelevant.

As illustrated by Bull, certain information technologies may already be such an area. One oft-cited example in the French debate on outsourcing is German electronics giant Bosch, which has used the threat of relocation to extract longer hours from its workforce. Excluded from the debate is Bosch's rapidly increasing investment in high-end software R and D in India. Much like Siemens, Philips, STMicro, and scores of others, Bosch's only global software center with international "gold standard" certification (Capability Maturity Model Level 4 and 5 from the US-based Software Engineering Institute) is in India, not in Germany or France. In fact, in spite of more attempts at certification than their Indian counterparts, European IT firms have singularly failed to receive the highest stamp of approval.

And the quality gap here is growing. In the last two years, Indian subsidiaries of US software companies have begun filing more patents than Bell Labs, the world's largest R and D facility. Sometime in early 2005, General Electric will employ more top-end talent at its Bangalore unit than in New York.

Such an exit strategy would send a strong message that highlights France's serious interest in protecting its competitive strengths, instead of its struggle to keep everything at home. It may also encourage French firms in dying industrial sectors to reach out meaningfully for partners and allies before they are swallowed up, or disappear due to irrelevance, after the anti-relocation kitty runs out of money.

Above all, France will demonstrate a desire to embrace the future, instead of taking the last stands against the 21st century.

The writer is managing director of Allilon nv, and author of Rising Elephant: The Growing Clash With India Over White-Collar Jobs (Common Courage Press, 2004).

© Yale Center for the Study of Globalization