French voters have increasingly become aware that their country is at economic odds with the rest of the world: high unemployment rates, high levels of debt and massive social benefits reserved for a shrinking majority. Most candidates vying for president, and most of their supporters, recognize deep inside that such a system cannot be sustained amid intense global competition. So the French turned out in force, a record 85 percent of the electorate, in the run-off race to elect conservative Nicolas Sarkozy. The bad news is that unions and other leftists will resist any reforms that decrease benefits. Hard-right nationalists, after throwing support Sarkozy’s way, will urge him to be tough on immigration and crime and toy with some protectionist measures. Possible good news: A younger generation now controls major parties and could enact fair policies for the long-term good of all; a yearning for change could rally the French to embrace global competition. Sarkozy’s first challenge is winning support in the French parliament. If he can refrain from a brash style and policies that divide, Sarkozy may yet convince the French that globalization doesn’t have to be a threat, that their nation still can regain its position as a major contributor to the world at large. – YaleGlobal

Sarkozy has won with the promise of change, but genuine reform depends on the will of French citizens
Patrick Sabatier
Tuesday, May 8, 2007 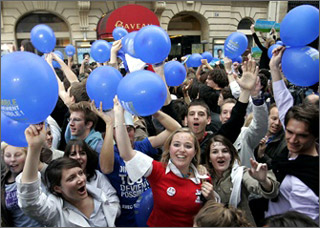 Sarkozy supporters rejoice, opponents have the blues: Can the new president

satisfy the French in the face of leftist opposition? (Photo: Reuters)

PARIS: France, unable to reform, can change only through revolution, it’s often said. Will Nicolas Sarkozy’s election, with 53 percent of the popular vote on May 6th, as the new president of the French Republic defy conventional wisdom?

The answer may be a cautious yes, but could have as much to do with tectonic shifts in the political landscape and French perceptions of their country’s predicament in a globalized economy as with the new president making good on promises of a clean break – a “rupture” with the past of which he’s part.

Record electoral participation, 85 percent, proves that French democracy remains vibrant. For most French people, politics do matter. With the 2007 election, voters sent a strong message for change, born from growing awareness of the country drifting into a perilous morass under the 12-year reign of outgoing conservative President Jacques Chirac. The slowest growth, highest unemployment and fastest-growing public debt among large European economies stoked fear among the French of national decline and a collapse of the welfare state under its own weight. This combined with other fears, from terrorism to illegal immigration, to convince the French that business as usual is no longer an option.

Sarkozy’s victory, though, shows that this thirst for change is balanced by an equally strong yearning for restoring France to its lost “greatness” and prosperity by a return to traditional values – work, patriotism, authority – of a mythical past, thought by some to have been lost after the upheaval of May 1968. The conservative leader cleverly surfed to the Elysée Palace by playing on contradictory wishes among the French for simultaneous renewal and change and restoration and reassurance. During the campaign, he relentlessly castigated laxness, demise of the work ethic and national pride, while promising “liberal” reforms, Thatcher-style, to modernize the economy and the social system.

At 53, Sarkozy will become the second-youngest president of the Fifth Republic. Main rivals, the Socialist Ségolène Royal, who garnered 47 percent of the vote, and the Centrist François Bayrou, who got nearly 19 percent in the first round, also are in their early 50s. The three contenders collectively embodied a change of leadership, and of generation, within the major political parties.

Besides being the first serious female candidate for leadership of the state, Royal also endeavored to send back to pasture the so-called Socialist “elephants,” those leaders who had been dominating left-wing politics since François Mitterrand’s election in 1981. In the same way, Sarkozy had hijacked the leadership of the main conservative force, the UMP, and the Elysée palace by elbowing out Chirac, godfather to the right since 1974. Sarkozy surprisingly made people forget that he himself had been a constant fixture of conservative governments since 1993.

Evolutions in the balance of power within the right and left, though, are more important for the future than generational changing of the guard. The Socialist party has been freed of its cumbersome “union” with the radical left, after dismal results in the first round of the election of the Communists, Trotskyists, Greens and anti-globalization candidates whose combined vote hardly reached the 10 percent mark.

This signals the end of an era of the so-called Union of the Left, begun with Mitterrand’s victory in 1981, and of a deep-seated tradition of radical left-wing protest politics. The Socialists will find it easier to break with old dogmas and pursue a social-democratic agenda of reform, looking, as in most other EU countries, for allies in the center.

On the right, Sarkozy owes his election mostly to his ability to siphon the far-right vote by appealing to “right-wing pride.” Jean-Marie Le Pen’s xenophobic, populist National Front was diminished in the first round to around 10 percent, its worst result since 1984. Most of his electors rallied to Sarkozy. The new president established himself as the standard-bearer of a hard right, waging the French equivalent of the American culture wars by preaching traditional values such as the exaltation of nationhood and identity, which will have its own ministry in the new government, dealing with immigration; the value of work and authority; and admiration for wealth and individualism.

Diminished influence of the extremes, as well as renewed strength of the center, gives leaders from right and left leeway to tackle their respective camp’s holy cows and renews political debate that enhances the chances of reform.

In a way this election marks the end of the post-war political era in France. The president-elect and his defeated Socialist rival repeatedly pointed at other European countries, including those governed by social-democratic governments – Great Britain, Spain or Sweden – as examples of the path France must take to regain competitiveness, growth, fiscal balance, while remaining a player in the globalized economy. The fight between right and left is not so much about the need for economic and social changes, as about the extent one needs to cushion the shocks of these changes.

Analysts abroad hail the new tenant of the Elysée as a man who will carry out the reforms demanded by the prevailing orthodoxy – a radical liberalization of the labor market, deep cuts in the state budget and public services, lower taxation of individuals and businesses. But it may be a mistake to expect Sarkozy to launch into a liberal revolution that compels a reluctant France to abjure its status as exception.

He faces serious hurdles in attempting to make good on his numerous campaign promises: Some were pure electoral ballyhoo, like the one about forcing the European Central Bank to lower the euro, something over which he has no control. Others could run into serious constitutional problems, like not taxing overtime, or are contradictory with other promises, such as tax reductions as opposed to reducing public debt.

Of course, the unions and the left will resist his declared intention to reduce some social benefits and amend labor laws. His authoritarian streak and sincere belief that he has a mandate may push him to try forcing reforms brashly, in the face of popular opposition, running the risk of igniting street violence as he did while minister of the interior in 2005, turning himself into the most polarizing politician ever elected to the French presidency.

He must take into account that a majority of those who voted for him probably also voted “No” to the European Constitution in 2005 and reproached Chirac for not being assertive enough in the defense of perceived French national interests. Sarkozy is, to an extent, hostage to this nationalistic, anti-European and protectionist base. Moreover, he’s surrounded by the same “dirigiste,” centralizing conservative elites and businessmen as his predecessor. During his campaign, he promised to uphold economic patriotism and defend “national champions,” and even launched populist attacks against the EU, accusing it of being at least partly responsible for France’s ills by acting as “a Trojan horse for globalization.”

Chances for implementing reforms and restoring growth in France indeed seem high under the Sarkozy presidency, but success is by no means guaranteed. Much depends on results of the parliamentary elections, to be held June 10th and 16th. He may turn out to be another, younger Chirac, all bluster with little action, less preoccupied by modernizing France than with holding on to a power that has been his lifelong ambition – a monarchical presidency, dedicated to the never-ending though fading dream of French glory.