The debate that has raged in France for 15 years over the right of Muslim girls to wear religious headscarves to school has come to a head with a plan to ban the practice. The French ideal of strict separation of church and state has pushed the government to ban this "conspicuous" display of religious identity in state schools. Moreover, some feminists and government officials consider the veil to be a repressive symbol, directed at subjugating women. Shada Islam, a Brussels-based journalist specializing in EU policy, argues that the "Affair of the Headscarf" has missed the point. The better course of action, she argues, would be for French officials to concentrate on integrating the country's Muslim population, a group which has been marginalized economically, socially, and politically. Feelings of discrimination have pushed many younger Muslims to embrace a more radicalized Islam that is difficult to reconcile with many European values. Until France and other nations learn to embrace their growing Muslim populace, she concludes, this divide will only deepen. –YaleGlobal 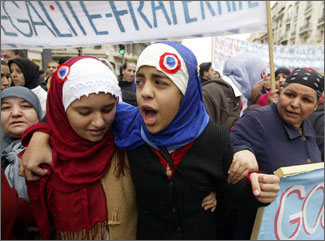 French Muslim women in Marseilles protest the law banning headscarves in school: The ban does not address real problems of discrimination, hostility and isolation. (Photo: AFP)

BRUSSELS: The proposed French law banning the Islamic headscarf and other "conspicuous" religious symbols in schools and public administrations has brought to the surface the uncomfortable issue of the role of minorities in European societies. Not all of France's neighbors share the country's passionate commitment to secularism and the republican ideal of a strict separation between church and state, arguments used by the French government to demand the headscarf ban. But many are equally afraid of the veil as a symbol of rising militancy among Muslim communities.

The anguished French debate over the Islamic veil and the "threat" it poses to Western traditions, including the principles of gender equality, looks set to be repeated in Belgium, Germany, Spain and the Netherlands. 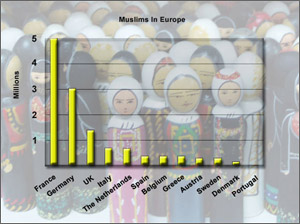 Europe's political rhetoric over the sartorial choices of Muslim women is misplaced, however. Instead of fretting over the veil (and, as was suggested recently by French Education Minister Luc Ferry, Islamic beards as well as the bandanas that Muslim girls might wear to circumvent the ban), European politicians should be tackling the real problems of discrimination, hostility and isolation facing almost all of the continent's 12.5 million Muslims. It is this isolation that has encouraged some to embrace a more rigid interpretation of Islam.

Painfully missing from Europeans' discussions on Islam is any recognition that Muslim immigrants are an integral part of Europe, that Islam is part of Europe's historical heritage and its present. Muslim workers, mainly from Morocco, Turkey, Algeria, Tunisia, West Africa, and South Asia, continue to play a crucial role in Europe's economic development. 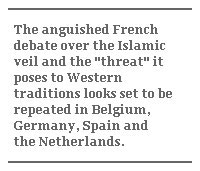 Unlike the urban professionals - doctors, engineers and IT experts - who make up a majority of Muslims in North America, Europe's Muslim immigrants are largely from poor, rural backgrounds and have come to the continent to labor in coal mines and steel mills. Some have climbed up the social ladder but a large majority still remains on the margins of society, ignored by politicians and business leaders and facing discrimination in housing, schools and labor markets. Instead of easing integration of Muslims into mainstream Europe, the French national assembly debate on the ban starting on February 3 risks deepening the divide.

Even more dangerously, it also threatens to aggravate post-September 11 Islamophobic sentiments in Europe. With regional and European Parliament elections set for this spring in most EU states, there are fears that the debate could further spur the popularity of Europe's unashamedly Islamophobic and xenophobic far-right parties. In particular, Jean-Marie Le Pen's Front National in France is seeking to consolidate the gains it made in the 2002 presidential election.

France may have the largest number of Muslims - about 5 million - but it is by no means the only European country facing the challenge of integrating its Muslims.(See chart) Demands for new Belgian legislation to ban Islamic headscarves in the country's schools, courts and public administrations has triggered a major political row, splitting the small country of 10 million people, which includes an estimated 400,000 Muslims.

Belgian Foreign Minister Louis Michel warned recently of "the development of a sort of pseudo-fundamentalist trend which could end up encouraging a miniature clash of civilizations in Belgium." Michel has also denounced the veil as a symbol of the submission of women. 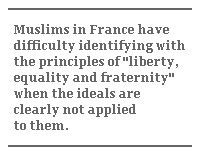 Germany appears heading for an equally emotional confrontation. Berlin's highest court ruled last September that veils were allowed unless existing legislation said otherwise. But the states of Lower Saxony as well as Bavaria and Baden-Wuerttemberg are working to introduce laws banning the headscarf for schoolteachers. All three states have said they are targeting the headscarf as a political symbol to avoid it from being equated with the Christian cross.

Channeling the debate into a more constructive discussion on integration remains a painful challenge. The French discussion over the headscarf is a "false one," argues Betoule Fekkar-Lambiotte, a Frenchwoman of Algerian descent and a former member of the country's Council of the Muslim Cult, set up by President Jacques Chirac in spring 2002. "The real problem facing France is acceptance of Islam, of new practices, of adapting to 21st-century realities," she says.

French politicians remain adamant that Muslims must play by the state's republican rules, disregarding Islam's mix of religion, state and society. But Muslims in France have difficulty identifying with the principles of "liberty, equality and fraternity" when the ideals are clearly not applied to them, argues Fekkar-Lambiotte.

Neither France nor its neighbors have done much to engage their Muslim minorities, allowing a more militant version of Islam to gain favor among the most disaffected and younger members of the community. Younger Muslims are now much readier to proclaim their Islamic identity than their parents and also more likely to fall under the sway of largely foreign-trained imams espousing the strict Islamic traditions of Saudi Arabia and other Islamic nations which are far from the realities of life in Europe.

The veil is seen as the most visible symbol of this radicalization. It is also a question of women's rights, says Vincent de Coorebyter, director of Belgium's Centre for Socio-Political Research. "The veil is seen as a sign of discrimination," he says. Muslim women, especially those who wear headscarves, are viewed as victims of a repressive religion and culture. European feminists and politicians shrug off suggestions that the veil can be a fashion statement, a legitimate expression of a new 'girl culture', or that not all women who opt for the veil are being forced to by their husbands, brothers, or fathers. In ironic contrast to the effort to 'emancipate' Muslim women, young Muslim men continue to be the target of job discrimination, French police prejudice, and public distrust.

Integration is a two-way street, however. While European governments have clearly failed to give Muslims a stake in society, Muslim communities also need to do more to break their isolation. Largely disorganized and divided, Europe's moderate Muslim majority has been unable to present its case effectively to European governments. As a result, the debate has been hijacked by a minority of radicals, says Fekkar-Lambiotte who resigned from the French Muslim Council last year because she said it was being taken over by Islamists. "What we need is a counterweight" to the militants, she insists.

Signs of changing government attitudes are emerging. Arguing that dialogue rather than confrontation is required, Belgium's minister for social integration Marie Arena has promised to hold a series of "inter-cultural" encounters to discuss the veil and other issues. After years of rejecting any suggestions that Muslims need affirmative action programs to advance in society, France appears to be changing its stance and has even appointed its first Muslim, Aissa Dermouche, as prefect in Jura.

More is clearly needed, however. The French move to ban headscarves may be misguided, but it has finally succeeded in spotlighting the many challenges facing governments and Muslims as they struggle to come to terms with Europe's new multi-cultural and multi-religious realities. But the sensible solutions necessary to allow harmonious co-existence will require a broadening of the current debate on the Islamic veil. Europe's Muslims are not going anywhere: the continent is their home.