How to Deal With NGOs – Part II, Russia

President Vladimir Putin recognizes that nongovernmental organizations (NGOs) are useful tools for shaping global and national policy – and also for criticizing other world leaders. The second article in this two-part series examines Putin’s two-pronged approach in handling NGOs, a strategy on display during the recent G-8 summit in St. Petersburg: While keeping many Russian-based NGOs and opposition parties under tight security, Putin hosted representatives of international NGOs at his residence and acted as the voice of the “Civil G-8” at the meeting of world leaders. Thus, the president deflected criticism that might fall upon Russia for its human and civil rights record, while keeping local opposition and media under tight governmental control. Russia’s lack of transparency in restricting NGOs and political parties has not led to a large outcry from the Russian people, who continue to place their trust in Putin. Likewise, NGOs favored by Putin remain eager to keep him as a conduit between themselves and the G-8 leaders. – YaleGlobal

How to Deal With NGOs – Part II, Russia

President Putin is gracious with some NGOs and harsh with others
Liliana N. Proskuryakova
Thursday, August 3, 2006 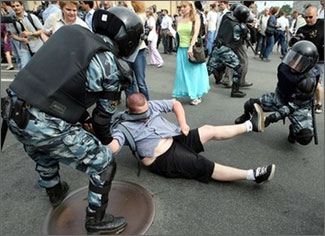 Where did you say you came from? Russian police deal with local protesters while Putin hosts international NGOs

MOSCOW: A series of summit meetings held in Russia during July placed the country front-and-center on the world stage. Both the G-8 meeting and a cluster of summits for international civil society organizations also highlighted Russian President Vladimir Putin’s sophisticated two-pronged strategy of dealing with nongovernmental organizations: pampering international NGOs to burnish his progressive image, while concurrently tightening the NGO environment and public-policy space in Russia.

With recent crackdowns on the media and foreign-funded activist organizations, Russia is a focus of attention for the human rights community. Consequently, several hundred organizations and opposition parties gathered at the “Other Russia” conference in Moscow in early July to voice their concerns about states that limit civil freedoms under the pretext of fighting terrorism. In the same month, more than 750 Russian and foreign NGOs gathered in the capital at a state-funded “Civil G-8” conference to precede the G-8 summit, as leverage on world leaders headed to St. Petersburg. Coinciding with the G-8 summit, participants of the World Social Forum gathered at a stadium in St. Petersburg. Before and during the summit, authorities put tight controls on activists, escorting them from planes and trains and holding preventive talks in the offices of law-enforcement agencies.

Despite the tight controls, the Russian president was the first among G-8 leaders to attend the Civil G-8 meeting and host an informal meeting with representatives of 12 international NGOs in his residence. By conveying concerns from the global civil society leaders to his G-8 colleagues, Putin abated criticism of his administration among the civil networks.

Putin is aware that NGOs contribute to shaping global and national policies: Umbrella organizations from Western Europe – such as Make Poverty History, G8 Alternatives and anti-Iraq war coalitions – effectively influence European policy. Recently in France, youth movements and labor unions joined forces in a successful campaign against the First Employment Contract Law. In Russia itself, labor unions and social organizations helped enact change in the law regarding the system of entitlements.

Putin, therefore, sees considerable advantage in aligning with global NGOs, at least on certain issues, and rhetorically establishes himself as a friend of poor and debt-ridden countries. After the Civil G-8 recommended reform of global economic institutions like the International Monetary Fund and the World Trade Organization, Putin noted that “the existing structure reproduces these debts again and again,” then adding, “The debt of the poor countries will be further aggravated if, say, developed countries will not cease their subsidies to certain industries, first and foremost agriculture. And in case governments of certain countries will attempt to stop internal subsidies, they will have major internal problems, including those with the support of NGOs.”

Like other G-8 leaders, the Russian president willingly talks about human rights anywhere but on the homefront: While Putin resists human rights in Chechnya, the US ignores human rights violations in Iraq and the Guantanamo Bay prison, and the EU rejects civil rights for immigrants.

Kumi Naidoo, secretary general of CIVICUS, an international NGO, noted: “what was so exceptional was that the president of a country who was being attacked for democratic deficits opened up the greatest space of dialogue with civil society, while countries with longstanding democratic traditions in the G-8 who see themselves as exporters of democracy have not done what we witnessed. President Putin listened to every working group report and gave a five- to ten-minute response to each of them.” While too late to change the G-8 agenda for 2006, Putin promised to convey the message to other leaders in informal talks, passed NGO recommendations to Angela Merkel and included some points in the chairman’s conclusions.

In dealing with civil society, therefore, Putin entertains foreign NGOs at his residence, while keeping the protests of local organizations under police guard. The response reflects how Putin calculates the value of NGOs – he remains in their favor enough not only to preempt criticism of Russian limitations of democracy and human rights, but also help direct their sharp criticism towards the US and other Western governments.

The Russian president has a knack for holding mirrors to his critics, as shown in one brief exchange between him and US President George Bush while both spoke to the media during the G-8 summit: Bush commented about Americans wanting Russia to undertake institutional changes like free press and freedom of religion that have taken place in Iraq, and Putin quipped: “We certainly would not want to have same kind of democracy as they have in Iraq, quite honestly.”

With Russia ranked as the world’s second largest producer of oil, Putin holds yet another shield against criticism from NGOs or foreign powers. The strongest members of the G-8 that import oil seek any means of leverage on oil exporters, including human rights and democracy. Yet those protests are quiet and diplomatic to assure smooth oil supplies. Instability in the Middle East makes the security of Russian supply even more crucial to importers.

Russia’s central government is bolstered by revenues due to rising demand in energy markets, and one consequence is the exodus of foreign foundations. The Russian government creates support and funding mechanisms for certain NGOs – programs for mothers and infants, education and an open-grant competition to set up a government-funded network of NGO support centers – but too often in a non-transparent manner. Thereby, the NGOs remaining in Russia are under tight government control. According to polls, Russian citizens welcome increased social spending, and certain civil-society groups are happy with the increased support that comes thanks to increased oil revenues, freeing Russia from dependence on foreign funding.

The loudest demands on Putin’s government focus on removing restrictions for NGOs and political parties, ensuring a plurality of political perspectives for national electronic media and fostering an open democratic society in Russia. For example, PASOS, a network of policy centers in 18 transition countries, contends that the “lack of space for live political debate on television, and increasing censorship of pre-recorded shows, is anathema to democracy.” Such debates, largely underground, pose little challenge for Putin.

This stems, in part, from a contradiction noted by political scientists in Russia – the gap between the critical mindset of the population and an apparent unwillingness to undertake protest actions. For example, a citizen survey found that, while more than a quarter of all Russians are willing to sign a petition, only 10 percent have actually done so, according to Russian scholar Christopher Marsh. A substantial proportion of the population shows some involvement in civil-society activity, yet this involvement remains sporadical.

At the same time, a large share of the population – over 60 percent – consistently reports granting trust in President Putin. According to Levada Center opinion polls, the majority of Russians would like to change the constitution to make the president eligible for a third consecutive term. Putin himself has repeatedly stated that he will step down at the 2008 elections, and he is expected to present his own successor.

In the meantime, NGOs eagerly anticipate more dialogue with G-8 leaders. At his brief introduction during the informal meeting with international NGOs at his residence, Putin pointed out the need to institutionalize dialogue between the G-8 and Civil G-8, no doubt trusting that criticism won’t target Russia alone.