This Is How Democracy Dies: Atlantic

Democracy requires hard work, patience, compromise and trust. Citizens may be dissatisfied with a leader but must stay informed and engaged in politics. Yet support for democracy around the world is in decline. The University of Cambridge’s Centre for the Future of Democracy analyzed data from more than 154 countries, 3,500 surveys covering more than 4 million respondents, and social-science research on the topic. The finding: “Public confidence in democracy is at the lowest point on record in the United States, the major democracies of Western Europe, sub-Saharan Africa, and Latin America,” reports Yascha Mounk and Roberto Stefan Foa for the Atlantic. Satisfaction is reported to be rising in Southeast Asia, Scandinavia and Eastern Europe, but overall, dissatisfaction approaches 60 percent in 77 democracies, at its highest level since 1995 and most pronounced in high-income, developed economies. Dissatisfaction runs higher in larger democracies with larger populations. Reasons for the decline include the 2008 financial crisis, corruption scandals and policy crises. The report concludes: "If confidence in democracy has been slipping, then the most likely explanation is that democratically elected governments have not been seen to succeed in addressing some of the major challenges of our era, including economic coordination in the eurozone, the management of refugee flows, and providing a credible response to the threat of global climate change." Citizens respond by embracing extremism, and societies become polarized. – YaleGlobal

This Is How Democracy Dies: Atlantic

Read the article from the Atlantic about a report on the decline of democracy.

Yascha Mounk is a contributing writer at The Atlantic, an associate professor at Johns Hopkins University, a senior fellow at the German Marshall Fund, and a senior adviser at Protect Democracy. He is the author of The People vs. Democracy.

Roberto Stefan Foa is a university lecturer in politics and public policy at the University of Cambridge.

Read the report from the University of Cambridge Centre for Democracy: Global Satisfaction With Democracy 2020. 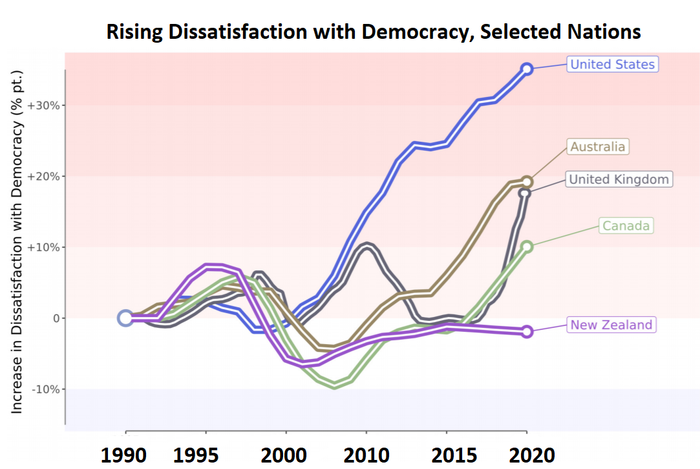 Democracy for Hong Kong and Taiwan

Globalization and the Threat to Democracy

Democracy: Does the People's Will Matter?