In the US, Indians and Indian-Americans make up the largest non-Caucasian segment of the American medical community, where they account for one in every 20 practicing doctors. In recent years, they have become a more vocal and visible presence, undertaking charitable activities and political lobbying. But in spite of their community's past success, many Indians are now having difficulties practicing in the United States, writes Steve Raymer, an associate professor of journalism at Indiana University. Doctors trained in India say it is difficult to obtain visas after the terrorist attacks of September 11, 2001. Even those who do get visas for advanced medical education are asked to return to India after their training unless they agree to set up practice in underserved areas, where medical specialists often have difficulty earning a living. Discrimination may also complicate the task of Indian physicians- some say they face prejudice when applying for residency programs. And cutbacks in healthcare funds have led health maintenance organizations to cut doctors, adds Raymer, with the foreign born often the first to go. These problems come at a time when a continued influx of Indian doctors may prove vital to the US, which is dealing with a shortfall of physicians to cope with a growing and aging population. Onerous visa requirements and discrimination towards Indian doctors, concludes Raymer, only exacerbate “a looming national healthcare crisis”. - Yale Global 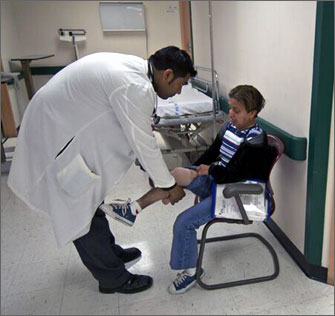 Rahul Sharma, a resident physician of Indian origin, examines a patient at New York's Bellevue Hospital: The opportunities for his fellow countrymen to join his profession in the US may be shrinking. (Photo (c) Steve Raymer 2004)

NEW YORK: Around 600 B.C., more than a century before the Greek physician Hippocrates became the greatest healer of his era, the Indians Atreya and Susrata established medical schools in separate parts of the subcontinent. About the same time, Indian doctors developed a code of ethics that required healers to maintain patient confidentiality and lead a life dedicated to caring for the sick.

Today Indian doctors have become a powerful influence in medicine across the world - from North America and Great Britain to East Africa, Malaysia, and Singapore. Nowhere is their authority more keenly felt than in the United States, where Indians make up the largest non-Caucasian segment of the American medical community. Indian doctors have found a home in the medical marketplace, where they are a mainstay in primary patient care in urban and rural areas. Numbering over 38,000, physicians of Indian origin account for one in every 20 doctors practicing medicine in the US. Another 12,000 Indians and Indian-Americans are medical students and residents - doctors in specialty training - in teaching hospitals across the country. And Indians make up roughly 20 percent of the "International Medical Graduates" - or foreign-trained doctors - operating in the U.S.

But new challenges may slow the influx of Indian doctors. Many say they are having difficulty getting US visas after the terrorist attacks of September 11, 2001. And a professional backlash has challenged new immigrants looking to join the lucrative American medical establishment.

"It's never been easy to come to the United States, but it is even more difficult now," says Sharad Lakhanpal, president of the American Association of Physicians of Indian Origin (AAPI) and a clinical professor of medicine at University of Texas-Southwestern in Dallas. "Moreover, there are many subtle forms of discrimination. Even second-generation Indians feel discrimination in application for residencies and fellowships at teaching hospitals. Some just don't get applications sent to them."

Ironically, these challenges come at a time when the US medical establishment, led by the powerful American Medical Association (AMA), says the country now faces a physician shortage in some regions and specialties. For the past two decades, the AMA and the government-appointed Council on Graduate Medical Education have recommended that US medical schools maintain a near-steady supply of 16,000 new doctors a year, despite a population increase of 24 percent between 1980 and 2000. Now worried about a potential shortfall of physicians, the AMA says international medical graduates (IMGs) can help meet the needs of a growing and aging population, and has pledged to help speed up visas for foreign doctors.

But young doctors who obtain their medical degrees in India find it increasingly difficult to travel to the United States for advanced medical education unless they or a spouse already hold a green card that entitles them to permanent residence, or unless they agree to work in areas defined by the government as medically underserved.

Getting a visa for a two-to-five-year-long residency at a university or teaching hospital is only the first of several challenges facing Indian doctors seeking to work in the United States. In the 1960s and 70s, IMGs were heavily recruited to fulfill the Medicare program's promise of free medical care for every American over the age of 65. Today, Indian doctors must return to India after completing their advanced training unless they agree to set up practice in rural or low-income areas.

"IMG's play a vital role in areas with shortages," Ahmed Faheem, a Beckley, West Virginia psychiatrist originally from India, told a recent high-level AMA meeting. "If you don't ease off the visa requirements, then it's going to get worse."

For the Indian doctors who are allowed by US authorities to fill these less glamorous primary care jobs, there is still no guarantee they can make a livable income in an era of sky-high medical malpractice insurance and managed care schemes. And rural areas typically need more generalists than specialists, which makes it difficult for a heart surgeon or radiologist to earn a living outside of major cities.

Today, Indian doctors seeking admission to US residency training programs must first fly to either Singapore or Bangkok to take qualifying examinations not given in India. Next they must obtain a US visa to travel to Atlanta for a "clinical skills assessment" test before applying to any American university or teaching hospital's specialty course. Once accepted into a program, they can only receive a US visa back in India - a process that can cost upwards of $5,000 and take a year or more to complete.

"It was definitely much easier to come to the USA in the 60's, 70's, and 80's - before the cutback in visas," says Parag Mehta, an internist and attending physician, or teacher, at New York Methodist Hospital in Brooklyn. Mehta practiced medicine for seven years in his native state of Gujarat in India before coming to the New York with his wife, a green card holder and obstetrician. "Having a green card is now the most common ticket into the US medical system. I see it with my students every year."

Another challenge facing Indian doctors and others who are primary care, or family practice "generalists", is their lack of bargaining power with the big insurance companies and health maintenance organizations (HMOs) that cover more than 160 million Americans. Indian doctors, lead by the AAPI, say that reductions in doctorsfederal and state funds for health care have forced HMOs to hire fewer and cheaper doctors - and that HMOs are dumping competent foreign-born and foreign-educated doctors. .

"The quality of health care goes down when HMOs start to hire the cheapest people around," says Doctor Lakhanpal of AAPI. "That's why we need collective bargaining power at the state level." 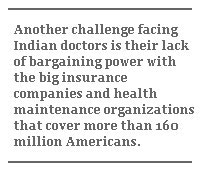 After years of sitting on the political sidelines, Indian-Americans - affluent, educated and doubling in number every 10 years - are starting to flex their muscles in Washington. Indian physicians are lobbying at the state and federal level, quizzing presidential candidates, and working with the 167-member Indian Caucus - a group of US congresspeople friendly to India and Indian-Americans. The AAPI has a full-time legislative office in Washington that is pushing a nationwide limit on malpractice insurance premiums, collective bargaining with HMOs, a Patients' Bill of Rights law, and uniform medical licensing for all 50 states. The organization also fields complaints about professional discrimination, and was a driving forcing in passing the 1992 Anti-Discrimination in Medicine bill.

Despite the hurdles Indian doctors in the US may face, many remain committed to their calling. Organized by the AAPI, doctors and nurses of Indian origin have established free walk-in clinics across the US to treat senior citizens and patients who are indigent, lacking health insurance, or unable to see a physician during normal clinic hours.

"This country has been very nice to us," says the AAPI's Lakhanpal. "The weekend clinics are sort of our way of giving back to community."

Yet although Indian doctors have carved a comfortable niche in the American medical community, red tape and discrimination may slow their success and exacerbate a looming national health care crisis.

Steve Raymer is an associate professor of journalism at Indiana University in Bloomington and was a National Geographic Magazine staff photographer for more than 20 years. He is working on a photographic book about the Indian Diaspora.