The US, struggling to control violence in Iraq, has ratcheted up its threat against neighboring Iran as a primary culprit. Longstanding US concerns about Iran defying the international community by developing nuclear weapons have recently been heightened by its accusation that the Islamic state has been supporting Shiite militias against Sunnis in Iraq’s ongoing civil war. Conservative US policymakers argue that the growing power of Iran threatens US allies like Saudi Arabia. Against this backdrop, an image of Iranian President Mahmoud Ahmadinejad and Saudi King Abdullah embracing at a recent meeting in Riyadh is indeed jarring. But author and journalist Dilip Hiro points out that while the two nations are traditional rivals, both share economic interests as leading exporters of oil. A cooperative effort by Shiite Iran and Sunni Saudi Arabia could present the sole means of ending chaos in Iraq. If that were to happen, the US could find itself on the sidelines as Middle Eastern powers devise their own strategies for regional security. – YaleGlobal 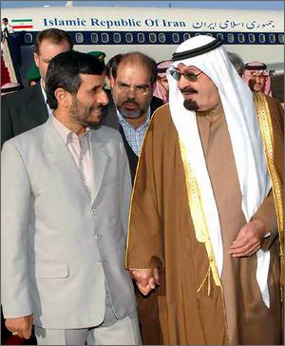 Will the hand holding mark a new beginning?

LONDON: The news coming from the Middle East of late spoke of growing concern among Iran's Sunni Arab neighbors about the Shia state's growing power. That story line took a new twist on March 3 when Iranian President Mahmoud Ahmadinejad arrived in Riyadh to the warm embrace of King Abdullah, the ruler of Saudi Arabia and a longstanding ally of the US.

The image – and the accompanying pledge by the two leaders to resist any attempt to spread the sectarian conflict in the Middle East for the good of the region in particular and the Muslim world at large – was in dramatic contrast to Sunni-Shiite conflict raging in Iraq daily. The image also stood in contrast to speculation in Washington about the rivalry between Saudi Arabia and Iran intensifying to the point of each funding and training sectarian militias in Iraq to engage in full-scale civil war.

So what does one to make of this unexpected scene from Riyadh? To assess the significance of the apparent beginning of détente, one needs to transcend the exclusively sectarian framework constructed recently. Viewed from the perspective of history, the Iran-Saudi relationship would confirm Lord Palmerston’s aphorism that enemies are not permanent, but interests are. 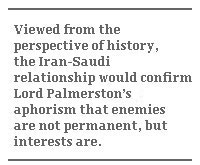 Yet the ongoing Sunni-Shiite violence in Iraq – against the background of Jordanian King Abdullah’s warning about the emergence of a “Shiite Crescent” in the Middle East – has colored the view of the American policymakers to such an extent that many now can’t help but view the Muslim world through the sectarian prism. In the eyes of American strategists, Iran’s power amounts to a security threat as the Saudi kingdom contains a quarter of the globe’s oil reserves. The petroleum reserves of Iran amount to only half of the Saudi Kingdom’s.

This concern about Iranian power and a narrow sectarian perspective have led US officials, including Vice President Dick Cheney and Secretary of State Condoleezza Rice, to engage in demonizing the predominantly Shiite Iran. Sounding more Sunni than real Sunni Arabs, they assert that the Sunni Saudi Arabia, Egypt, Jordan and the small Gulf monarchies are threatened by the emergence of a super-confident Iran, intent on acquiring nuclear weapons. However, the recent dispatch of carrier battle groups to the Gulf and heightened speculation about a US attack on Iran could just be saber-rattling meant to create division in the Iranian leadership. There are also reports that Saudis are trying to restrain both sides.

An overview of the relations between Iran and Saudi Arabia – situated on the opposite sides of the Persian Gulf – since the 1979 Islamic revolution in Iran, shows periods of both intense rivalry and active cooperation.

With Ayatollah Ruhollah Khomeini, the radical founder of the Islamic Republic, declaring monarchy un-Islamic and attacking the hereditary rulers of the Arabian Peninsula, his regime alienated all the monarchs of the Gulf.

Tehran’s relations with the Saudi Kingdom soured further when the latter sided openly with Iraq, ruled by the secular Baath Party, during the Iran-Iraq War, 1980 to 1988. 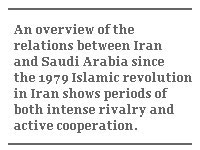 Yet when oil prices collapsed in the spring and summer of 1986 to $10 a barrel, hurting the economies of both Saudi Arabia and Iran, Saudi King Fahd met the Iranian oil minister that October. They backed the idea of a fixed price of $18 a barrel. Being the leading exporters of oil in the Organization of Oil Exporting Countries, their joint decision carried weight.

And when Saudi oil minister Ahmad Zaki Yamani, who had held the job for 24 years, failed to endorse this target, King Fahd dismissed him.

In other words, economic interests led to a convergence of the policies of the two leading Islamic states in the Gulf.

As it is, both Iran and Saudi Arabia are fundamentalist states, both administered according to the Sharia, Islamic law. The difference is that Iran has a representative system, with its citizens choosing their representatives through regularly held elections, whereas Saudi Arabia is a monarchical autocracy which does not allow citizens’ political participation in the administration of the state.

Following the end of the Iran-Iraq War and the death of Khomeini in June 1989, overall relations thawed between Tehran and Riyadh. This trend was aided by the subsequent election of Ali Akbar Hashemi Rafsanjani, a pragmatic cleric, as president of Iran. 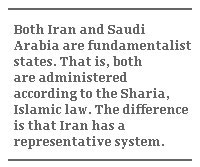 Rafsanjani had a cordial meeting with Saudi Crown Prince Abdullah in March 1997 in Pakistan on the fringes of an Islamic gathering, and was invited to undertake the hajj pilgrimage in Mecca the following month. This paved the way for Iran to host the triennial summit of the Islamic Conference Organization (ICO), headquartered in Jeddah, in December. By then Muhammad Khatami, a moderate cleric, had succeeded Rafsanjani.

The hosting of the ICO summit by Iran, which is 90 percent Shia, was remarkable. Of the 49 members of the ICO, only four were Shia-majority states. Breaking with protocol, Khatami had two private meetings with Saudi Crown Prince Abdullah.

It is worth noting that it was after an ICO summit in Mecca last year that Ahmadinejad re-asserted at a press conference, where King Abdullah, the host, was present, that the extent of the Holocaust had been exaggerated.

And, following his recent meeting with King Abdullah, Ahamdinejad declared with his customary bluster that “Both Iran and Saudi Arabia are aware of the enemies’ conspiracies. We decided to take measures to confront such plots. Hopefully this will strengthen Muslim countries against oppressive pressure by the imperialist front.”

Their talks centered round Iraq, Lebanon and the Palestinians.

Within days of this summit, the Iranian government announced that it would attend the meeting of Iraq’s neighbors and the permanent members of the UN Security Council in Baghdad on March 10 to find ways of stabilizing security in that hapless country.

Reports from Beirut mentioned a wave of optimism unleashed by the Ahmadinejad-Abdullah meeting, defusing the three-month-old standoff between the Riyadh-backed government of Sunni Prime Minister Fouad Siniora and the Tehran-backed Shiite Hezbollah leading the opposition. 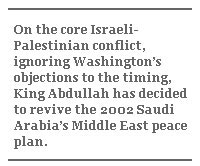 On the core Israeli-Palestinian conflict, ignoring Washington’s objections to the timing, King Abdullah has decided to revive the 2002 Saudi Arabia’s Middle East peace plan – offering Israel recognition by all Arab states in return for its evacuation of Arab land occupied during the 1967 Arab-Israeli War – at the Arab League summit in Riyadh later this month.

Remaining opposed to the idea of recognizing Israel under any circumstances, Iran views Abdullah’s upcoming move as benign: The move implies reduction in Washington’s influence in the region.

How Iran and Saudi Arabia end up dovetailing their policies to deescalate the Sunni-Shiite violence in Iraq – an aim which they share with the US – will only become clear at the forthcoming conference in Baghdad to be followed by a ministerial meeting in April.

All things considered, in their foreign policies, Iran and Saudi Arabia have so far stood at opposite poles.

Tehran has backed radical movements in the Muslim world irrespective of their sectarian allegiance: Hamas, for instance, is a Sunni organization. Riyadh, on the other hand, has supported orthodox and fundamentalist forces among Sunni Muslims. For instance, it was one of only three countries that recognized the Taliban regime in Afghanistan.

Yet it’s also true that when Iranian and Saudi leaders find that their traditional rivalry is undermining their countries’ economic or diplomatic interests, they adopt a pragmatic stance and close ranks in the name of Islamic solidarity.

Dilip Hiro is the author of “The Iranian Labyrinth,” and most recently “Blood of the Earth: The Battle for the World’s Vanishing Oil Resources,” both published by Nation Books, New York.