US Secretary of State Mike Pompeo reversed 40 years of US policy by suggesting Israeli settlements in the West Bank do not violate international law. The move dashes Palestinian hopes for a peace settlement providing land for their own state. The New York Times suggests the internet is to influence politics in Israel, lending support to Benjamin Netanyahu and prompting need for a third election. Both Netanyahu and his opponent have failed to form a government after two elections in 2019. The settlements are a divisive issue: Netanyahu suggests that Israeli courts should decide the issue while Benny Gantz emphasizes agreements that meet security requirements and promote peace. Pompeo noted the decision has no bearing on similar disagreements around the world. The Trump administration made similar announcements on Israel, including recognition of Golan Heights as Israeli territory and relocating the US embassy from Tel Aviv to Jerusalem. Lara Jakes and David M. Halbfinger write: “Opponents of annexation, however, warn that it puts Israel’s status as a Jewish democracy at risk in two ways: If the West Bank’s Palestinians are made Israeli citizens, the country’s Arabs could quickly outnumber its Jews. If they are not given full citizenship rights, Israel would become an apartheid state.” The Trump administration has promised to revive peace negotiations. – YaleGlobal

Read the article from the New York Times about the new US position on Israeli settlements in occupied Palestinian territory. 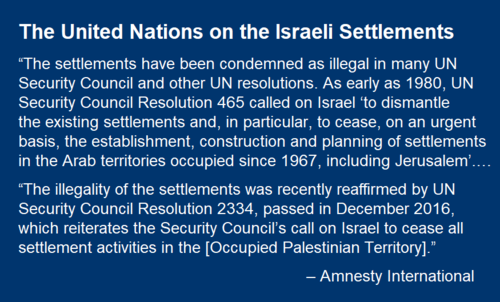