The Limits of Growth – Part I

The double whammy of two global crises – recession and climate change – emerged after too many of the world’s citizens pursued lifestyles that the planet simply cannot sustain. This YaleGlobal series explores the limits of growth and calls for global governance that will encourage sustainable lifestyles that could ensure the planet’s survival. Fractured regional or national governance only encourages exploitation of common goods, including the oceans and air. The UN Climate Change Conference will convene in Copenhagen in late 2009, and Bo Ekman, founder of the Tällberg Foundation, offers recommendations for global governance, the last hope for ensuring a means of subsistence for future generations. – YaleGlobal

The Limits of Growth – Part I

COPENHAGEN: The world suffers from a “double pneumonia” – financial and environmental crises, both likely to tip over into disasters for many more people. We cannot cure double pneumonia by treating one lung at a time.

The global economic crisis is not a reason for delaying action on climate change. Countries must aim for a global agreement to be negotiated at the UN Climate Change Conference, which convenes November 2009 in Copenhagen, and must address how humankind can render systems of governance compatible with sustainability and supporting life in all its diversity.

The two systems – nature and economy – are in an incessant search for equilibria, balances, survivability. Pushing the value-creating systems beyond their own ability to sustain and correct themselves is disastrous, as we can see from the playing out of the monstrous financial crisis. Pushing natural systems beyond their finely tuned and balanced interdependencies is even more dangerous and reckless, because unlike the financial system, the government cannot control or dictate nature’s behavior. In the meanwhile the pumping out of CO2 and other green house gases into the atmosphere warms the planet and disrupts natural systems, also being taxed by an ever-growing number of humans – soon 7 billion, 9 billion in our children’s lifetime.

The system of governance focuses on regional and national interests, not the interests of the whole. We perceive the fragments to which we belong – be they a nation, corporation, party or movement – as “safe havens.” For any member of such fragments to speak, act or think in the interest of the whole is taboo. The leaders agree the whole is important, but press on with their priorities.

Nowhere is this more apparent than in climate politics and governance of the commons. The land itself is under restless, violent and escalating exploitation. Yet no one represents the commons. The interest of the whole goes undefended by a strong set of laws and means for stringent enforcement.

For years, the Tällberg Foundation has advocated the need for systems solutions to systems problems and urged a Global Contract based on the principles of hard governance, the discipline of implementation.

But our governance system is based on principles of independence and not on the interdependence which constitutes the economic, political and environmental reality of our time. The pathetic governance in place is surreal.

No one nation or stakeholder is prepared to yield an inch on their short-term relative competitiveness.

If we would stay with the present governance system, wars over resources are inevitable. The Copenhagen agreement should have the vision and courage to point out the conflicts that will emerge from flimsy allocation of natural resources by national territorial boundaries. National constitutions should include binding commitments to developing as integrated and interdependent parts of the wider systems of nature and economic value creation.

The fact is that the present applications of sovereignty and nationhood are outdated. We must constitutionally define the planetary boundary conditions for human economic activity. We should work towards having all nations adopt a common preamble of their constitutions that declares us as inseparable parts of the wider, natural, economic and security systems. Citizens of all nations should prepare for a wider identity, a wider “we.” 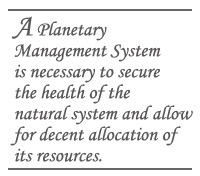 Fragments of such Planetary Management System already exist – the United Nations and a Security Council, the International Monetary Fund and a Basel Convention, the European Union and hosts of international conventions and agreements on global standards. There are oversights of crucial systems like telephony, postal services, air transport and nuclear safety and informal mechanisms like the G8, an ever-increasing wave of NGO’s and global movements that point to the emergence of a new consciousness of us being part of a wider system, a global whole.

With no force in pursuit of the interests of the whole, national greed and egotism rule and inevitably take us to war to secure nature’s measure “for us.” A Planetary Management System is necessary both to secure the health of the natural system and allow for decent allocation of its resources.

This would help legitimize agreements and policies that require everyone’s participation in solidarity with the welfare of everyone and of the Earth, in equity and in climate justice.

The Intergovernmental Panel on Climate Change and the Kyoto Protocol were in themselves innovations of governance. But the protocol must be judged as more fiasco than failure. Rather than reduce global emission to the 1990 level, emissions since have increased by 35 percent.

I have little faith in us reaching a solid agreement for all future at Copenhagen. I have less faith in its perfect implementation, unless the agreement includes the following considerations:

• a systems understanding of nature and of the complexity of the problem at hand,

• a quantitative definition of planetary boundaries,

• a set of moral imperatives,

• legally binding commitments and definition and the assignment of the force needed for implementation of the articles of the agreement.

National behaviors must become subject to common laws, principles and enforcement mechanisms. The Copenhagen negotiations represent an effort to reconcile conflicting positions among nations, regions, business interests, between the rich and poor, north and south.

To achieve an agreement of this magnitude would take the world beyond the governing principles laid down by the Peace Treaty of Westphalia in 1645, the birth of the principle of the sovereign nation. It must move beyond the principles laid down for the post–World War II international order at Bretton Woods in 1944, where foundations were laid for the institutions of present multilateralism: the UN, the IMF, the World Bank and other agencies. Despite making huge contributions to world peace and security, they lack the powers to deal with the complexities of a world that’s become interdependent beyond the imaginations of their founding fathers.

The first step is to revise our thinking as did Franklin D. Roosevelt, Winston Churchill and John Maynard Keynes. Rethinking our relationship to the planet and to nature, and hence to economic policy, technology, learning and governance/security – and to ourselves. Nations must agree that we need additional regimes to govern our legitimate interests in the wider systems of which we are a part, in order to serve everyone’s legitimate interests of security and well-being. Otherwise, environmental crises will continue to drive economic failure and failed states. 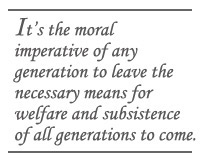 The most immediate decision the Copenhagen process could take is to decide on a global carbon tax of €100 per ton, which would yield €850 billion. The money should be used to replace carbon-fueled electricity plants and assist adaptation of livelihoods imminently threatened by rising sea levels, floods, desertification and deforestation.

It’s simple common sense to live within one’s means and resources. It is the moral imperative of any generation to leave the necessary means for welfare and subsistence of all generations to come, not just our children and grandchildren. Treating the planet of its double pneumonia of economic and environmental crisis would be the first critical step in meeting this obligation to the posterity.

Bo Ekman is founder of the Tällberg Foundation. The 2009, the Tällberg Forum will strive to formulate a concrete vision on preventing stabilization of the earth systems and respond to the question, How on earth can we live together and live within the planetary boundaries?