The Limits of Growth – Part II

Governments pursue rapid growth as a path to prosperity, and policymakers generally depend on markets to reveal and control problems. In the second of this two-part YaleGlobal series on the limits to growth, Chandran Nair, founder of the Global Institute for Tomorrow, points to parallels between the global economic crisis and climate change. Both challenges are rooted in the pursuit of excessive wealth and as they require some common sacrifice, both defy easy solutions. “A close look at the unfettered ecological consumption patterns of countries show that economic growth pursued under free-market conditions allow the same type of excesses that resulted in financial crisis,” Nair explains. To avoid catastrophe, Nair urges strong and courageous government action to control excessive consumption in a resource-constrained world. – YaleGlobal

The Limits of Growth – Part II 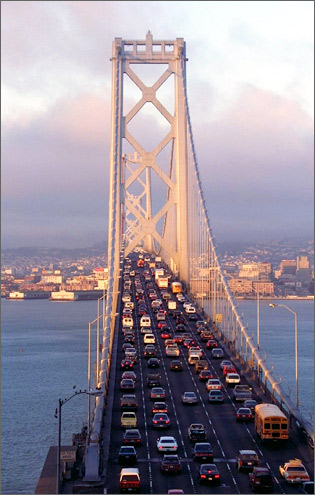 HONG KONG: How to grow the global economy without depleting the earth’s resources has been a challenge that has for far too long been conveniently ignored. The financial meltdown has now come as a stark reminder of how the world’s failure to strive for sustainable development has grave consequences.

Humanity faces an urgent challenge, climate change, largely brought about by manmade activities and excesses. As little as five years ago many governments, politicians and corporations were in denial, refusing to accept the limits to our unsustainable ways. The financial world relied on market mechanisms for righting breakdowns, even those affecting the natural world. 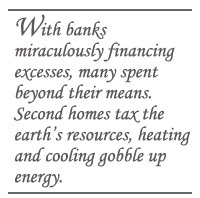 The origins of the financial crisis – in sub-prime mortgages – tell the story of unsustainable ways. Those in the United States who procured sub-prime loans were not destitute, homeless individuals. According to the Center for Responsible Lending, 90 percent of people who took sub-prime loans from 1998 to 2006 already owned homes and, based on world averages, probably belonged to the top 10 percent in terms of quality of life and housing. Many refinanced homes to further fuel a consumption-driven lifestyle, in some cases to make ends meet but in others, to purchase second homes and other extravagances. With banks miraculously financing these excesses, many spent beyond their means. Second homes not only tax the earth’s resources but heating and cooling gobble up energy.

Consumers are not the only offenders, though. Lured by the promise of disproportionate rewards, banks fed this culture of “more and bigger is better,” overlooking how high-risk loans would be re-paid. Banks lent to unqualified borrowers, ultimately leading to plummeting property prices, a slowdown in the US economy, trillions in losses by banks, wiping out savings of millions around the world.

With climate change, we can see parallels – mankind heads towards disaster, as many cherish a belief that the markets will save the day. Much of this philosophy is again pushed by the Anglo-Saxon centers of finance in London and New York. Many policymakers pin hopes on market-driven solutions – in the form of carbon credits or betting on investments in renewables – to solve the climate crisis.

The reality, however, is that market mechanisms have serious limitations and the potential to create more problems than solutions.

A closer look at carbon trading shows that rampant problems with this proposed panacea: First, carbon trading does not reduce emissions, but rather frees polluters of responsibility by allowing them to purchase credits elsewhere – typically in developing countries – thus encouraging complacency. 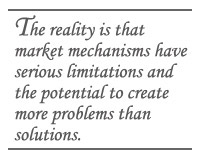 Carbon trading is also unreliable as the tools to measure credits are murky. Trading companies do not agree on the level of credits required for the simplest offset calculations. Companies tend to favor a “quick fix” by investing in cheap and short-term projects.

The remedy demands sacrifices of people in the developing world who already scratch a miserable living – even in booming China almost half the population still struggles on US$2 or less a day. With political survival at stake, no government, democratic or otherwise will adopt complex global trading schemes run by Western banks and risk dashing their people’s economic aspirations.

Renewable energy schemes are also vulnerable to excesses. As the stakes become higher and project proponents become greedier, bankers and lawyers develop increasingly complex, opaque financial instruments to tap into growing potential – this is already happening in the emissions trading markets. The results will be high, short-term profits with little regard for reversing negative trends. In this way, the focus is undoubtedly distorted from crisis mitigation to profit generation. Reckless behavior will not be self-corrected by the competitive market until it’s much too late.

Problems associated with overdependence on market solutions to address climate issues are already apparent. In the last few months, investments for renewables have dried up, because of the financial crisis and decisions from bankers, driven by short-term profit motives, who do not understand the renewables industry. According to New Energy Finance, venture capital and private equity investment in clean energy fell by 24 percent in the third quarter of 2008 when compared to the previous quarter. This is not good news for countries like China which has estimated it requires 2 trillion RMB, about US$290 billion, in investment to realize goals for renewable-energy generation by 2020. Even in areas that remained strong throughout the downturn, namely early-stage venture capital in clean-energy technologies and building new capacity, such as wind farms or solar parks, project proponents depend on the same institutions that brought down Wall Street due to a preoccupation on profit-maximization. 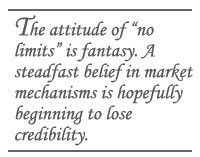 There are natural checks to rampant consumption-driven growth. But the market corrupted by perverse incentives and overconsumption has ignored the warning signals. Even former US federal reserve chief Alan Greenspan, a staunch believer, was forced to admit his support of unregulated free markets was “partially” wrong. He acknowledged being mistaken in his belief that banks would protect shareholders and the equity in their institutions out of pure self-interest. Disillusionment with the market was echoed by US Treasury Secretary Hank Paulson, who said, "Raw capitalism is dead."

The attitude of “no limits” is fantasy. A steadfast belief in market mechanisms is hopefully beginning to lose credibility.

With global markets on shaky ground, governments have intervened – and this should be the case for climate issues. The global public good should not be placed on the sacrificial altar of the private interests of unregulated financiers. In the case of climate change, clean technology projects need funding and these should be sourced from the public purse, not through financial instruments designed to create disproportionate profits for a few who control capital flows.

Better strategies must be found to combat climate change. The most obvious is also the most unpopular: Reducing emissions requires rapid reduction in the consumption of fossil fuels and that means accepting limits to growth based on promoting relentless consumption.

Those unconvinced of the need for limits need only to consider the statistics in the World Wide Fund for Nature’s (WWF) Living Planet Report 2008: Humans use 30 percent more resources yearly than the earth can replenish. As a result, the report’s authors claim the annual ecological debt is up to US$4.5 trillion. (This figure is based on a UN report which estimates the economic value of services provided by ecosystems destroyed annually. Calculations include economic impacts arising from diminished rainfall for crops, reduced flood protection, degradation of land, loss of carbon sinks and biodiversity and more.)

A close look at the unfettered ecological consumption patterns of countries show that economic growth pursued under free-market conditions allow the same type of excesses that resulted in financial crisis. Population and consumption patterns of three ecological debtor countries are particularly telling: The US consumes 1.8 times its national biocapacity, or area available to produce resources and capture emissions; China consumes 2.3 times and India 2.2 times. The average available bio-capacity per person is 2.1 hectares per person, and the actual per-person footprint is as high as 2.7 hectares. Americans require 9.4 global hectares on average.

Until far-reaching regulations are introduced to reduce emissions, the true innovations needed to protect humanity will not surface. Draconian measures to operationalize sustainability are key as few people act purely for the greater good. Awareness and pious words do not constitute actions. Ironically, such measures are, of course, easier to enforce under authoritarian forms of government than in so-called liberal democracies. China, for example, managed to reduce pollution levels in Beijing by imposing restrictions on car usage on certain days of the week. Public acceptance of this policy that protects the greater good illustrates that effective solutions to the climate crisis depend on taking actions free of political intervention by vested interests.

The financial crisis demonstrates need for strong government to protect the public good. In a resource-constrained world, there’s likewise no substitute for sound regulations. Policymakers must concede that capitalism has met its nemesis in climate change and should not be seduced by the market’s quick fix.

Chandran Nair is founder and CEO of the Global Institute for Tomorrow.