Russia, trying to restore its great power status, accrues influence in the Middle East. “Both the unrest in Syria and the Arab Spring presented Russia with the opportunity to increase its engagement in the region and were accompanied by a rapid uptick in Russian economic and political activities across the region,” explains Becca Wasser for RAND. Shared interest in selling fossil fuels helps, yet challenges include juggling the region’s rivals, including Saudi Arabia and Iran. Also, Russia depends on openings created by others, presenting itself as an alternative to the United States. Meanwhile, the Russian economy struggles with sanctions and must limit activities, including soft power and defense investments, even as it becomes more dependent on its energy sector. Strategic leveraging gives Russia “an outsized presence in comparison with its flagging economic power.” If anything, Gulf States exploit Russian weaknesses as Russia struggles to increase trust and avoid choosing sides. The country’s decisions may have big impacts for small groups and individuals, but Wasser concludes that Russia is not a first-choice partner for many nations, instead serving as pawn for enticing US or Chinese interest. For now, Middle Eastern states still control the regional agenda. – YaleGlobal

Short-term strengths of Russia’s strategy in the Middle East – including transactionalism and balancing of rival partners – may be its undoing in the long term
Becca Wasser
Tuesday, December 3, 2019

Read the article from the RAND Corporation about Russia’s quest for influence in the Middle East.

Becca Wasser is a senior policy analyst at the RAND Corporation, where her primary research areas include wargaming, international security, and U.S. defense and foreign policy in the Middle East.

Also read “Russia in the Middle East” from the Carnegie Endowment for International Peace: 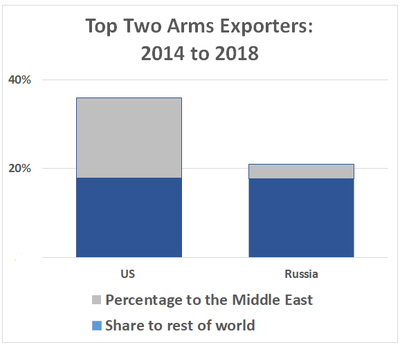 Competitors: The US sold 36 percent of the world’s weapons, about half to the Middle East, between 2014 and 2018: Russia sold 21 percent, with 16 percent of that to the Middle East; top buyers for the US during that period were Saudi Arabia, Australia and the United Arab Emirates and top buyers for Russia were India, China and Algeria (Source: Stockholm International Peace Research Institute, March 2019)