As lead exporter in many types of products, China takes pride in serving as factory to the world. But a spate of tainted products and recalls involving goods made in China gives many global consumers pause. China’s reaction includes denials, scapegoating and even the fast execution of one government official accused of taking bribes to allow production of shoddy goods. But the government has also employed Western public-relations specialists. “Spin,” or official interpretations designed to shape public opinion, won’t solve China’s problems or alleviate public concerns, warns journalist Paul Mooney. Tragically, China’s authoritarian government prohibits notice about dangerous products to Chinese consumers who suffer the consequences unaware. Chinese regulators and factory managers must learn to resist multinational demands for low-cost supplies. But public trust – among Chinese and global consumers – will be possible only when independent Chinese media are allowed to investigate and report without restriction. – YaleGlobal

A leading global exporter will reassure consumers abroad only when it has done so at home
Paul Mooney
Thursday, August 23, 2007 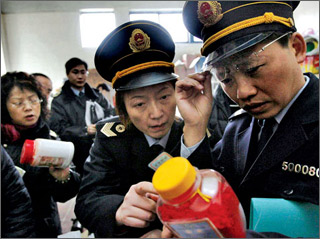 suspected products. But the government doesn't tell its citizens the bad news

about tainted food and toys

BEIJING: With a worldwide outcry against dangerous Chinese products, the impact of China’s exporting prowess is coming home to roost. China’s response to the stories of deaths from tainted products and recall of faulty toys reveals why serious remedy is unlikely to come any time soon.

Anxious to maintain its global reputation, the Chinese government has taken some quiet steps, but essentially fallen back on its tried-and-true method of dealing with such problems – a combination of silence, denials and old-fashioned scapegoating. Chinese silence over threats posed by tainted food, medicine or toys to the country’s own citizens make it clear that the country’s products can be truly trusted only after China allows the sunlight of its own domestic media to scrutinize its industrial practices. 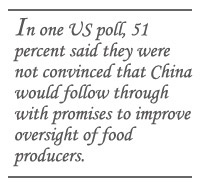 First came reports early this year of dozens of deaths in Panama, after people used cold medicines containing diethylene glycol, improperly labeled as glycerin, from China. Then there was the news that pet food from China laced with melamine, a coal derivative, had sickened and killed thousands of pets, toy trains painted with lead-based paints, lethal antibiotics and car tires that burst. The list goes on.

It didn't take long for the news to have an impact. According to a poll conducted by Zogby International in July, 82 percent of 4,508 Americans said they were concerned about buying Chinese products, and only 30 percent said they felt food imports from China were safe. Meanwhile, 51 percent said they were not convinced that China would follow through with its promise to improve its oversight of food producers.

In just a few months the “Made in China” label was seriously tarnished. Savvy marketers – like DSM Nutritional Products, the only bulk producer of vitamin C in the West – promoted products under a label that said, "Not Made in China." What started with pet food threatened to affect whole gamut of Chinese exports. In the end, much of US$1 trillion worth of Chinese exports was at risk.

In the face of the rising storm of complaints from around the world, Chinese officials launched an unprecedented public-relations offensive that consisted of Western-style tactics as well as a public show of punishing the guilty.

The government called in public-relations specialists to consult with senior officials and hired Patton Boggs, one of the largest US lobbying firms, to offer counsel on "United States Congressional matters." 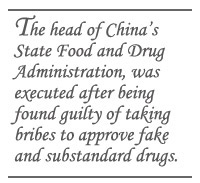 On July 10, Zheng Xiaoyu, head of China’s State Food and Drug Administration, was executed after being found guilty of taking bribes to approve fake and substandard drugs. Government agencies issued daily reports on the steps underway, and officials said they were drafting the country's first food-recall system. Hundreds of food manufacturers were shut down, and their names were posted on the administration's website.

Some saw the moves as a sign that China was finally changing the way it handled public relations. Scott Kronick, president of Ogilvy Public Relations Worldwide, China, described the official response as the best he'd seen in his 12 years working in China. "They really improved compared to the way they responded in the past," he said. "I think they recognized that people need information."

However, these steps were accompanied by a seemingly contradictory policy of denial and finger-pointing. During the summer, various officials took turns alleging that the bad publicity was the work of biased foreign journalists and jealous trading competitors.

"Some foreign media, especially those based in the United States, have wantonly reported on so-called unsafe Chinese products," said Li Changjiang, the head of the General Administration of Quality Supervision, Inspection and Quarantine, during an inspection of a food enterprise on July 15. "They are turning white to black."

On August 1, Foreign Minister Yang Jiechi told US Deputy Secretary of State John Negroponte that China didn't want the product scandals related to the country's exports to be exaggerated. "We also oppose politicizing the issue of Chinese products and oppose trade protectionism and trade discrimination," Yang was quoted as saying. 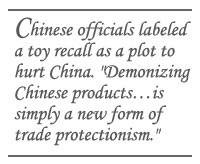 Weeks later, Li struck out again on national TV, calling the toy recall a plot to hurt China. "Demonizing Chinese products, or talking of the Chinese product threat, I think, is simply a new form of trade protectionism," he said. He didn't explain how Mattel – which stands to lose millions of dollars and faces possible legal suits – benefits from the move or would want to hurt its main supplier.

Various observers have commented that it's difficult for the Communist Party to monitor the actions of a growing number of far-flung factories. "Reforms have weakened the central government's ability to effectively control or monitor an explosive market, now primarily driven by hundreds of thousands of private enterprises," says Jiang Wenran, director of the China Institute at the University of Alberta, in Canada.

What's worrying, however, is the Communist leadership's long history of covering up sensitive news. It grossly under-reported the actual number of HIV/AIDS cases for years, and it prevented the media from reporting on the issue, allowing many more people to get infected. It also tried to hide the true extent of the SARS outbreak, enabling the deadly disease to spread throughout China and beyond its borders.

While the domestic media has carried some hard-hitting stories about these issues, its work has been despite the government rather than thanks to it. In many cases, journalists and whistleblowers have been punished or arrested for writing about such issues while the guilty producers go free.

In July, an undercover journalist with a hidden camera claimed to have secretly filmed a restaurant making baozi, or meat buns, stuffed with chemically treated, finely chopped cardboard. The story appeared on Beijing TV and CCTV before officials declared it a hoax. Within weeks, the reporter was arrested and sentenced to one year in prison, with scanty details of the case made public. Discussion of the tainted buns was soon wiped off the internet.

And to make sure there was no further local reporting on any food issues, Beijing propaganda officials in August announced a crackdown on "false" news reports and handed Chinese media heads a list of taboo topics. Not surprisingly, food safety topped the list. 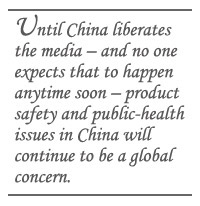 And while American parents return millions of lead-painted toys to shops, Chinese parents remain ignorant of the threat. Several Chinese parents interviewed by CNN in August expressed full confidence in the safety of locally made toys. The lack of information about the problem – no matter who's responsible – puts millions of Chinese children at risk.

Russell Moses, a China political analyst based in Beijing, attributes the attempt to adopt a "more aggressive spin" to the SARS outbreak in 2003: "The instruction they took from SARS is what you are seeing here. You have to control the news cycle."

He adds: "It's a shift in tactics, but not a change in objective. They're just doing a better job of spinning."

What China, as the world's factory, does or doesn't do is no longer just an internal issue – it affects the whole world. But with the media's hands tied, the best monitoring system and laws in the world will not work. Until China liberates the media – and no one expects that to happen anytime soon – product safety and public-health issues in China will continue to be a global concern.

Paul Mooney, a freelance journalist, has been reporting on China for more than 15 years.