Mortgages May Be Toxic, But US Treasuries Appear a Safe Haven

While the US financial markets were the source behind global credit calamity and still present tremendous uncertainty, foreign investors continue to demonstrate trust in US government institutions by increasing investments in US Treasuries. That trust gives policymakers time and space to work on significant imbalances in the areas of currency exchange rates, deficits and trade, explains Berkeley economist Ashok Bardhan. Falling prices of commodities and changing trade patterns will adjust reserves and, according to Bardhan, could “automatically force an adjustment in terms of lower trade deficits and lower reliance on foreign financing.” A series of hectic interventions, rather than scare foreign investors, reinforced faith in the strength and responsiveness of the US government in safeguarding investments. But alternatives will undoubtedly emerge for investors who would rather seek high returns than just safety, Bardhan cautions. US policymakers would be wise to prepare for the day when low-yield Treasuries fail to entice investors. – YaleGlobal

Mortgages May Be Toxic, But US Treasuries Appear a Safe Haven 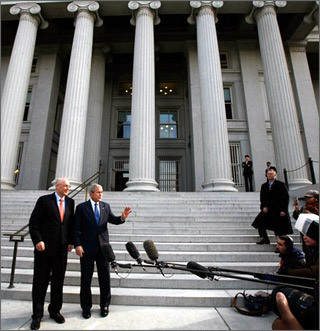 The last safe haven: Despite terrible mismanagement of US financial system,

BERKELEY: For years before the US financial crisis hit, economists had been warning of a coming collapse of the dollar brought about by the flight of foreign capital from over-leveraged US markets. The implosion of the US financial and banking system, however, resulted from a different kind of failure beginning with toxic mortgage-backed securities. While the private US markets are awash with risk, the crisis has not completely scared away foreign investors who flocked in large numbers to US government Treasuries. The abiding faith of investors in the robust and rapid response of US governmental institutions offers a rare silver lining to the dark clouds gathering over the economy and some breathing space for policymakers, by not compelling them to douse fires on two fronts.

For the past decade, foreign investors have been on a buying spree, accumulating US Treasuries, agency debt issued by Fannie Mae and Freddie Mac, mortgage-backed securities, corporate bonds and equities. The share of the total amount outstanding of Treasuries, agency instruments, corporate bonds and equities held by foreign entities has increased steadily, with China, Japan, the UK and oil-exporting countries being the main players. This “addiction” to foreign financing fueled heavy borrowing and consumer spending in the US, and inflated asset price bubbles. Most economists felt that the US could not run trade deficits forever and that foreigners would tire of anemic returns, the merry global drama would run out of steam and a stampeding herd of investors would run pell-mell for the exit doors, crashing the dollar and creating a major international financial crisis. What happened instead was a different sequencing of crises. While economists focused on one crisis, a different one sneaked up on them. 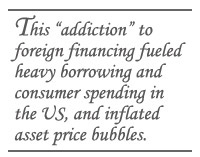 For a long time, cheap foreign financing has been good for US consumers, homeowners and investors. The ocean of liquidity generated downward pressure on interest rates, including mortgage rates. At the same time, this pas-de-deux of international finance benefited many emerging economies that recycled their dollar inflows back to the US. In the case of China, the major accumulator of dollars, US consumption demand for Chinese exports spurred job creation in China’s urban centers and therefore dictated a cheap Yuan policy. On the other hand, there was an abiding concern on the part of foreign investors that low returns on Treasuries, agency bonds and private equity, coupled with regulatory barriers to larger stakes in sensitive industries and growing currency risk, meant that increasingly the game was not worth the candle unless, of course, the alternatives were worse.

With the financial crisis in full flow in the US, will China and oil-exporting countries continue to pile up US dollar reserves? How will the crisis and the ongoing bailouts impact their motivations, investment strategy and search for alternative investment options? A look at their behavior since the crisis unfolded offers clues to how the crisis could shape the global financial picture. 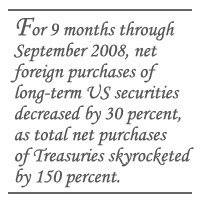 Treasury department data show that for the nine months through September 2008, net foreign purchases of long-term US securities decreased by 30 percent – but were still a sizeable $520 billion – compared to the same period last year. This has come about primarily through sharp drops in net purchases of stocks and corporate bonds, over a 70 percent decline in both cases, as well as a decrease in accumulation of agency debt and mortgage-backed securities.

However, total net purchases of Treasuries skyrocketed by 150 percent over the same period. China’s total net purchases of long-term US securities over the nine months in 2008, compared to the same period in 2007, increased by over 50 percent. Indeed, China is the only significant international actor, in addition to some tax-haven domains, that bucked the general trend of overall lower net purchases this year. The compositional shifts, however, are similar. While net Treasury purchases by China increased to more than $80 billion compared to net sales of approximately $5 billion over the same nine months in 2007, its purchases of all other securities decreased relative to 2007. 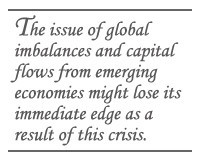 With falling oil and commodity prices, and hence declining value of exports, the rate of reserve accumulation is going to decrease in a wide swath of countries. China’s reserves, however, might continue to grow inexorably. Even though both exports and hot money inflows are expected to slow down, so is the import bill due to lower input prices. For China, it increasingly appears as if a turn to domestic investment and consumption is on the cards. In addition to satisfying diversification needs, the domestic focus also dovetails neatly into the need for stimulating the domestic economy in the wake of a global slowdown. Since the US and China are joined at the hip-wallet as it were, the lower imports from China, due to a recession and lower consumption in the US, would automatically force an adjustment in terms of lower trade deficits and lower reliance on foreign financing. The issue of global imbalances and capital flows from emerging economies might therefore lose its immediate edge as a result of this crisis.

At present, there seems to have been a wholesale move away from riskier assets and into US government Treasuries on the part of foreign investors. In addition to major new purchases of US Treasuries there has also been a sizeable panic inflow of foreign funds into short-term assets and deposits.

One immediate result of these inflows has been that the dollar has strengthened against most major currencies except the yen, proving that in a global contagion the best way to quarantine one’s self is to submit to a closer embrace of risk-free dollar denominated Treasuries, even if the source of the malaise is the homeland of the dollar. Diving into the eye of the storm in order to get away from is ultimately a testament to investors’ faith, not so much in the redemptive capacity of US financial markets, or even in broader market institutions overall, but above all else in the taxation capabilities and governance efficacy of US public-sector/government institutions.

While the confidence of foreign investors in the robustness of US market institutions has been shaken badly, the sequential bailouts, quasi-nationalizations and the increasing range of government interventions in the financial and economic system may therefore, instead of scaring off foreign investors, further strengthen their belief in the strength, viability and the rapidly responsive nature of non-market institutions of the United States and their power to safeguard their investments.

However, this manifestation of faith in the dollar and the US financial system may well be a short-term phenomenon despite the shortage of credit-worthy debt assets worldwide, and the size of the US economy and its commensurate claims on global savings. There remains a nagging suspicion that this may be the last hurrah for the dollar; as Benjamin Franklin is reported to have said – creditors have better memories than debtors. As soon as the threat of worldwide crisis is past or foreign investors come up with viable alternatives, there very well might be an unwinding of positions and outflows from US investments.

Ashok Bardhan is an economist at University of California at Berkeley.