Responding to public fears about job loss, the French government recently announced new measures to prevent the outsourcing of domestic production. Opponents of offshoring, however, overstate its harmful effects, argues French trade specialist Olivier Cattaneo. For instance, in the United States – where outsourcing has become a potent political issue – the trade surplus in information services actually doubled between 1995 and 2002. Outsourcing is not, in fact, a one-sided flow of jobs from rich countries to poorer ones; even those jobs that are relocated overseas are often replaced by new ones at home. Rather than punishing outsourcers, Cattaneo concludes, governments should encourage corporations to domestically re-invest profits, embrace innovation, and foster socially responsible practices. – YaleGlobal

As Western countries fret about job loss due to outsourcing, their concerns are as poorly founded as those expressed a century ago
Oliver Cattaneo
Wednesday, October 6, 2004 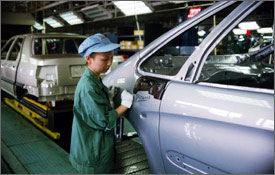 NEW HAVEN: "[China] will use the most incomparable and advantageous labor force: the Chinese worker, who will be paid 5 cents, while our workers get five dollars or more. Our products will be evicted from the Chinese market; and then China will sell us its own products. Initially defensive, it will quickly become offensive, and we will organize its assault. We already did!"

Sound familiar? Well, this speech was given by a Member of the French Parliament – in 1899 – at the time economist Edmond Théry published his book, The Yellow Peril (1901). More than a century later, the French Prime Minister is announcing new measures to prevent the relocation of domestic production capacities to countries like China, India, and Romania. Across the Atlantic, American politicians are fulminating against opponents for letting this happen.

Outsourcing, off-shoring, relocation … Pick your word. In the past, popular rumors held werewolves responsible for people's mysterious disappearances. In retrospect, this somehow seems reassuring, naming the otherwise unknown and incomprehensible. Today, in the labor market, outsourcing seems to play the same role: Jobs in the United States and Europe suddenly disappear in once prosperous sectors, and outsourcing, the scapegoat du jour, is held responsible. Looking at the challenges ahead, outsourcing's detractors must lose their fears and become responsible.

In the years since The Yellow Peril's publication, the world has certainly changed. Most significantly, the concept of free trade has been enshrined in the WTO. While the economic logic that led companies to send work abroad has not changed, neither has politicians' exploitation of such economic action. Investment abroad is generally motivated by economies of scale (using size to reduce the marginal cost of production) and access to foreign markets. For example, only 5 percent of all French investment abroad is associated with relocation, i.e. the transfer abroad of once located in France units of production.

For others, foreign investment is about creating new opportunities abroad. Outsourcing refers to the delegation of internal production tasks to an external entity – sub-contracting, essentially. An enterprise might decide to sub-contract some of its domestic production activities in order to become more responsive to market fluctuations, or to gain access to qualified personnel or services not available locally. Local production is not necessarily compromised. For example, the United States continues to export more IT services than it imports, although this sector is directly affected by outsourcing. In the categories of "computer and data processing services" and "database and other information services," the United States trade surplus has even expanded from US$2.1 billion to US$4.2 billion between 1995 and 2002, proving the vitality of domestic production. Outsourcing is often an important element of competitiveness and cost reduction.

International trade is a pathway to progress, since new technologies are embedded in the goods and services that cross borders. Historically, inventions spread over the world along the main trade routes. However, economist Joseph Schumpeter's theory of creative destruction is proved again and again: New jobs or activities replace old ones. At the global level, countries stand at different stages of development; hence, jobs that disappear in the most innovative countries like the United States continue to exist elsewhere. The best bet is for developed countries to continue to innovate and to create new jobs – not to hang to old jobs.

Irrational economic behavior delays progress, but does not stop it. In 2002, each of the 40,000 jobs that President Bush saved by raising tariffs and establishing quotas on steel imports cost American taxpayers about US$500,000. Meanwhile, higher steel prices may have cost up to 200,000 jobs in steel-consuming industries. In the long run, keeping a non-competitive industry alive is both illusory and detrimental to the whole economy. Limited public funds could be spent more efficiently in innovative sectors.

You can't have your cake and eat it, too. For example, France takes pride in being the world's third largest recipient of foreign investment, but it tries to legally restrict relocation of national leading industries. It ignores the reality that "national champions" must also be multinational companies. French car maker Renault's offensive strategy focuses on the production of a $6000 budget car in Romania. Here, success abroad underpins success at home.

Losing one's fear does not mean being irresponsible. One should not deny that free trade, and outsourcing in particular, has important short-term social and economic effects. Outsourcing could raise major challenges, at all levels. Multinational players must now confront the costs of their successes, by boosting domestic businesses' competitiveness, facilitating economic adjustment, leveling global inequalities, and ensuring more sustainable development.

At the domestic level, job turnover is increasingly important. Over the last decade, some 310 million US jobs were lost, but 330 million new jobs were added in the same period. Individuals must be more mobile, flexible, and innovative than ever before – but goodwill and practice are not always sufficient to avoid unemployment. Instead of living in constant denial of the economic logic of outsourcing, governments must address the real challenges. They should facilitate structural adjustment of domestic workers and provide a safety net, including temporary financial compensation and continuing education, for individuals who lose their jobs because of globalization. Enterprises investing or sub-contracting abroad should not be stigmatized, but rather encouraged to actively participate in these adjustment efforts and, further, to re-invest income generated abroad in their country of origin.

Globally, outsourcing could be perceived as a contribution to economic development. Sub-contractors and offshore businesses generate growth, and relocation can be a major vector for technology transfer. Developing countries should not be blamed for trying to attract foreign investment and exploiting their comparative advantages. Trade barriers already stymie their trade in other areas, such as agriculture and textiles; their increasingly competitive service sectors should not suffer the same fate. Developed countries that claim to be serious about promoting development should not block an important means of achieving it.

In fact, outsourcing should be used to make development more sustainable. China, for example, is the largest recipient of foreign direct investment and is often presented as the world's factory; it also poses a serious environmental threat. Corporations exporting jobs and production to China could foster responsible environmental behavior through their contracts. Developed countries' businesses should bring the best to developing countries, not the worst. Benefiting from lower salaries is one thing, but neglecting gender parity, workers' safety, environment, and basic rights is another. Corporate social responsibility must be universal. Trade is not simply a war of all against all, as suggested by commentators evoking philosopher Thomas Hobbes. A responsible approach to outsourcing could rather be inspired by philosopher Immanuel Kant's formulation of a categorical imperative: When abroad, act only according to laws that you would wish to become universal.

Olivier Cattaneo is a World Fellow with Yale University and a Research Associate with the World Economy Group at Sciences-Po in Paris.

© Yale Center for the Study of Globalization