One Hand Clapping in the Caucasus

As Georgia's newly elected president takes office this week, much of the world has high hopes for the future of his new government. Outsiders have been trying to influence developments in Georgia and neighboring Azerbaijan for some time now, says Eurasia scholar Kenneth Weisbrode, but if recent history is any indication, the path to stability in the Caucasus region is still quite rocky. Since the fall of the Soviet Union, high levels of official corruption and potentially destabilizing ethnic divisions in both Azerbaijan and Georgia have attracted the attention of democracy advocates from the US and Europe. The countries' considerable oil reserves and geographically central location have also caught the eye of multinational companies looking for profit. Yet with domestic divisions and international forces pulling the region in different directions, Weisbrode argues, stability and prosperity in the Caucuses are not guaranteed. - YaleGlobal

One Hand Clapping in the Caucasus 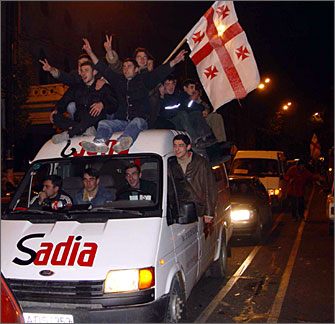 Georgia's "rose revolution" in progress: Demonstrators were organized by civil society groups, some funded from abroad. (Photo: Organization for Security and Co-operation in Europe - OSCE)

BOSTON, USA: Most observers concur that the collapse of the former Soviet Union began well before 1991 and continues today. Namely, in the Caucasus and Central Asia, the same Soviet-era apparatchiks hold power with much of the Soviet-era apparatus in place, albeit as 'independent' states. Yet, the forces of globalization have penetrated these societies to such an extent that dire assumptions about the consequences of authoritarian rule have begun to erode, most demonstrably in the South Caucasus during the past couple of months. Contrary to most expectations, the entrenched regimes of Heidar Aliyev in Azerbaijan and Eduard Shevardnadze in Georgia have been replaced without great bloodshed or social upheaval - so far.

In Azerbaijan, Ilham Aliyev, the son of the recently deceased strongman, assumed power after very dubious elections on October 15. Ilham, a former oil bureaucrat who reportedly lacks the flair and ruthlessness of his father, is not expected to survive the inevitable atrophy of his father's political organization, particularly in the face of serious opposition. It has been virulent but is likely to remain deeply divided for the foreseeable future.

In Georgia, a popular movement forced the ouster of President Shevardnadze following controversial parliamentary elections on November 2. In what has come to be called the "rose revolution," a junta of opposition leaders seized power following several days of mass demonstrations in Tbilisi. These demonstrations were organized by opposition parties and key non-governmental organizations (NGOs) like George Soros' Open Society Institute, using a variety of fora both inside and outside the country - from internet chatrooms to satellite television and radio - to raise the profile of the anti-Shevardnadze, nominally pro-democratic, forces. Their principal leader, Mikheil Saakashvili, an American-educated, aspiring populist, won the newly scheduled presidential elections handily and was inaugurated as Georgia's new president on January 25.

The outside world has followed both cases with considerable interest because its stake in this region has grown steadily since 1991. Foreign direct investment there last year reached an estimated US$2 billion. The lion's share of it has been in the energy sector, particularly in pipeline projects that require both regional and international collaboration to bring hydrocarbons to market. The jury is still out on whether the majority of these projects - particularly the one trumpeted most often by the United States, the Baku-Ceyhan oil pipeline - will fully meet expectations. But they have helped to promote the notion that the peace and stability of this region matter a great deal to the outside world, and to establish a decade-long pattern of contact between this region and the developed nations of Europe, America and East Asia. Such contact has served to highlight the dim prospects for the region in the near term. Severe debt, poor official accountability, high unemployment and uneven growth all continue to govern its affairs. Economic malaise was at the root of the recent protests against Shevardnadze, and was a primary preoccupation of Heidar Aliyev, despite grand promises and the intermittent enthusiasm of outside investors.

Western NGOs and multinationals have been heavily active in both countries, but the full measure of their political impact is hard to gauge. Azerbaijan's opposition parties have criticized outsiders for not doing enough to force the Aliyevs to allow political liberalization and stem official corruption. Whether such criticism will force a more serious reconsideration of foreign support for Ilham Aliyev is hard to say. At present the fractious opposition presents no viable alternative, or at least none that can compete with the set of relationships the Aliyev regime established with foreign multinationals during the 1990s.

The Georgian case, should it become a precedent, may change a few minds. There, NGOs led by the International Society for Fair Elections and Democracy - a Georgian organization supported by the U.S. Agency for International Development and the National Democratic Institute for International Affairs - claimed credit for achieving Shevardnadze's downfall. NGOs have played a critical role in linking the region's budding civil society with Europe and North America. For example, groups in both Georgia and Azerbaijan were among the most eager in the former Soviet 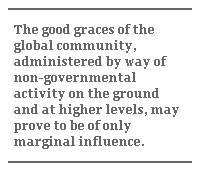 Union to seek membership in the Atlantic Treaty Association (www.atasec.org), a Euro-Atlantic, pro-NATO organization. But now that they have gained some measure of success, Georgia's NGO community finds itself in a curious position. With the former opposition in charge, such groups may be less eager or able to criticize the government. They may come to envy their counterparts in Azerbaijan, where a weak authoritarian system still provides fertile ground for activism.

The good graces of the global community, administered by way of non-governmental activity on the ground and at higher levels, may prove to be of only marginal influence. For Azerbaijan, another war with Armenia looms on the horizon, particularly for a weak government unable to hold its opposition in line. Georgia's political cohesion is just as likely to be short-lived if the mercurial Saakashvili mishandles his first few months in office, or if he takes too aggressive a stance against his domestic opponents, especially the Ajarian leader (and Shevardnadze ally), Aslan Abashidze. In the past couple of months Abashidze has closed the Ajarian border, declared a state of emergency and announced, then revoked, a boycott of the presidential election. Whether he can continue to be co-opted depends as much on the whims of his Russian backers as on the skill and forbearance of authorities in Tbilisi. Should their relationship with Abashidze deteriorate any further, a nationalist free-for-all could mean redrawing the map - and not only with regard to Ajaria. Indeed, a unique ability to hold the country together was the rationale Shevardnadze used repeatedly to justify his unpopular rule.

Local NGOs, no matter how well endowed by foreign backers, must still respond to domestic contingencies and limitations. In Georgia groups like ISFED have done yeoman's work in developing local councils and in advocating official transparency; yet nearly all of its work depends on the goodwill, or, more often, the benign neglect, of the central government. According to Georgian political observer, Java Devdariani, "effectively, Georgia's disorder permitted the NGO sector to grow. NGOs were able to fill a void created by government ineffectiveness." For their part, foreign governments have been cautiously supportive. While there is little doubt that both the Russian and the U.S. governments did much to ease the departure of Shevardnadze and the accession of Ilham Aliyev, nobody knows how long their cooperation shall last. The key interest of the United States, Turkey, and the energy multinationals has been to strengthen the independent viability of these states so as to permit the diversification of Caspian energy development. Russia (and to a lesser extent, Iran) has until only recently viewed such efforts in a zero-sum fashion, presuming that any strengthening of the hand of the domestic opposition in Azerbaijan and Georgia would mean a loss of Russian leverage over the internal politics of these countries - and, ultimately, over critical energy markets.

The scourge of geopolitical rivalry - imposed on the Caucasus for generations, as Lord Salisbury once put it, by armchair generals with maps of too small a scale - lies close to the surface, even in the 21st century. Rivalry (or, more often, the perception of rivalry) tends to trickle down, threatening even the most apolitical activity with persecution or betrayal. Such activity must continue, not only for the sake of reform in a fragile region, but also for its shot at a rightful place in today's global economy.