Opposition Wins in Myanmar, But Military Still Holds the Reins

The National League for Democracy, an opposition party in Myanmar led by Nobel Peace Prize Laureate Aung San Suu Kyi, has won a landslide victory. The military has pledged to work with Suu Kyi, but has a lock on 25 percent of seats in parliament, enough to prevent changes to the nation’s constitution if none of its representatives go astray, explains journalist and author Bertil Lintner. Suu Kyi’s NLD also won elections in 1990, but the military continued to keep her under long-term arrest. “Now the real work begins, and a new government led by NLD must deliver on its promises – or disappoint the people who voted for change on November 8,” explains Lintner. “Expectations are enormously high,” among overseas analysts and Burmans. Other challenges for the nation: ethnic tensions, a lingering threat from multiple rebel groups, as well as managing relations and influence from foreign powers including China. – YaleGlobal

Opposition Wins in Myanmar, But Military Still Holds the Reins

Despite NLD's landslide victory in Myanmar, threat lingers from rebel groups and the military may not fade in the background
Bertil Lintner
Thursday, November 12, 2015

YANGON: The ballot count for the general election in the country once known as Burma is not yet official, but celebrations have begun. The opposition National League for Democracy, NLD, led by Nobel Peace Prize laureate Aung San Suu Kyi, appears to have scored a landslide victory and left the military’s Union Solidarity and Development Party, USDP, with a handful seats in the National Assembly. People hope for transition to democratic and civilian rule in a country where the military in different guises has held the reins of power since a coup in 1962.

Now the real work begins, and a new government led by NLD must deliver on its promises – or disappoint the people who voted for change on November 8. Expectations are enormously high after the election, and it’s often overlooked that it will be a government with limited powers, even if the NLD manages to get a majority of elected National Assembly seats, which according to preliminary results seems to be the case. The limits are evident – despite her electoral triumph Suu Kyi is barred from heading the government led by her party.

According to the 2008 constitution, citizens with a spouse or children who are foreign citizens cannot serve as president. Suu Kyi’s late husband, Michael Aris, who passed away in 1999, was British; their two sons are British and US citizens, respectively. Suu Kyi has stated that she will be “above the president,” but it is uncertain what that means and what post she would get in the new government.

The country’s constitution, promulgated after a blatantly rigged referendum in May 2008, is tailor-made to preserve the dominant role of the military – no amendments to that constitution can be done unless more than 75 percent of all MPs vote in favor of such a proposal. With the office of the commander-in-chief appointing 25 percent of all seats, the military holds what amounts to veto power over any attempts to establish a more democratic order.

Most crucially, the military is autonomous and takes orders from only the commander-in-chief, not the president and his or her government. Then, the military – and not any elected person or entity – appoints the three most powerful ministers: those of defense, home affairs and border affairs. Defense, naturally, means liaison with the military and border affairs issues relating to the frontier areas, where a multitude of ethnic armed groups are active, and cross-border contacts with authorities in Burma’s immediate neighbors. The responsibilities of the Ministry of Home Affairs include not only the police and internal security but also the powerful General Administration Department, a government-organ that oversees local governments across the country and as such is above any locally elected assemblies and officials.

All those restrictions make it difficult for the government to tackle the most pressing issue facing the country since independence from Britain in 1948: relations among the central government, the majority Burmans and the country’s many ethnic minorities and their desire to establish a federal union instead of the present, centralized system. 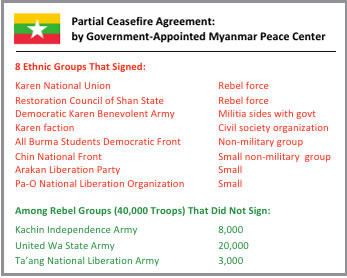 A multitude of ethnic rebel armies have been active in the country’s frontier areas for decades. A much-touted “Nationwide Ceasefire Agreement” between eight such groups and the government on October 15 this year, fell short of being an important step towards peace. Only two groups signing the accord could be considered genuine rebel armies: the Karen National Union, KNU, and the Restoration Council of Shan State, RCSS and its Shan State Army South. A third, the Democratic Karen Benevolent Army, or DKBA, has, in effect, been a militia on the side of the government since it broke from KNU in 1994. The fourth group, a Karen faction, is small, more of a civil society organization than a rebel army.

The fifth, the All-Burma Students Democratic Front has not been a fighting force to be reckoned with since the 1990s. The Chin National Front is a small, mainly unarmed group, and the Arakan Liberation Party is a tiny outfit with no presence in Rakhine State. It consists of a dozen or so people staying in KNU areas near the Thai border and should not be confused with the the Arakan Army, which fights alongside the Kachin Independence Army, KIA, in the north. The last of the “rebel armies,” the Pa-O National Liberation Organization is a one-man show led by a person who lives in Chiang Mai, Thailand, who set it up when the main rebel Pa-O National Organization/Army entered into a ceasefire agreement with the government in 1991.

None of Burma’s main ethnic armies active in the north signed the agreement – among them the KIA with approximately 8,000 soldiers and the country’s largest ethnic army, the more than 20,000-strong United Wa State Army, or UWSA, and their allies in northern and eastern Shan State. A total of about 40,000 ethnic troops are not part of the deal with the government. Observers see the less than half-baked agreement as little more than a face-saving gesture of the government-appointed Myanmar Peace Center, which has received vast amounts of money from the European Union and others. After several years of talks, the MPC needed something to show international donors to justify what in reality amounts to failure to achieve peace across the country.

It’s still noteworthy that three of the eight groups that actually have armed forces – the KNU, RCSS and DKBA – are based along the Thai border. Sources close to those groups assert that they were under heavy pressure from Thai authorities to sign the agreement. Thailand is eager to trade with Burma, exploit its natural resources, and develop its hydroelectric power potential. Likewise, it’s assumed that the UWSA, which has received massive support – including surface-to-air missiles, mortars, assault rifles and armored vehicles and howitzers – from China did not sign because Beijing needs it as a leverage when negotiating deals with the Burmese government. Burma’s decades-long civil war has always involved outside players, reflected in the October agreement. China has not yet reacted officially to the election result, but in line with its traditional “carrot-and-stick policy” it will most probably continue supporting the UWSA while maintaining friendly relations with the government while encouraging trade and investment.

Closer to the Burmese heartland, the new government must deal with discontent in rural areas, where farmers have seen their land confiscated and given to crony businessmen close to the military. The military’s own conglomerate, the Union of Myanmar Economic Holdings, UMEH, is believed to control or be involved in an estimated 70 percent of all major businesses in the country. Needless to say, the government has no power over the shadowy UMEH and how its fortunes are spent.

To break the political and economic power of the military will be an almost insurmountable task for the new government. The repercussions could be severe if the National Assembly fails to live up to the expectations of the millions of people who voted for the NLD – and it would not be too difficult for the mighty military to make that happen, undermining the popularity of the NLD and its charismatic leader. For after more than half-a-century of having had absolute powers, few here believe that the military will fade into the background, or as renowned Burmese author Wendy Law-Yone put it in an interview with Borderlessnewsonline the day after the election: “Dictatorships’ habits die hard in countries like Burma.”

Bertil Lintner is a former correspondent with the Far Eastern Economic Review and author of several books on Burma/Myanmar, including “Burma in Revolt: Opium and Insurgency Since 1948” (published in 1994, 1999 and 2003), “Land of Jade: A Journey from India through Northern Burma to China,” and “The Kachin: Lords of Burma’s Northern Frontier.” He is currently a writer with Asia Pacific Media Services.

Copyright © 2015 YaleGlobal and the MacMillan Center