Pakistan on the Brink

The US shotgun marriage with Pakistan, arranged after the 9/11 attacks in order to launch the US “war on terror,” has begun to fall apart, and in the process endangers the very state of Pakistan. The US detoured to Iraq and relied on Pakistan’s military ruler General Pervez Musharraf as an ally to manage the region. He’s gone and during the long period of US neglect, both Afghanistan, original home of Al Qaeda terrorists, and Pakistan deteriorated. Seven years later, poverty and despair still haunt much of Afghanistan, economic hardship has spread in Pakistan, and militants gain ground by taunting moderates about the countries losing sovereignty to the US military. Extremism spreads quickly, considering the literacy rate is about 50 percent in Pakistan, about 35 percent in Afghanistan. Division weakens Pakistan, a nuclear power and the world’s sixth most populated country. Author and journalist Ahmed Rashid argues that the future of Afghanistan, Pakistan, and indeed international security demands that the US lead the way in immediately developing a regional strategy with the two nations along with Iran, India and five Central Asian republics. – YaleGlobal

Pakistan on the Brink 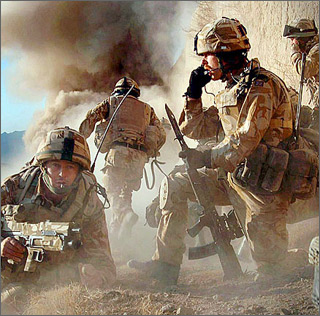 Endless war: NATO troops under attack in Afghanistan, often from forces backed by Pakistan, a supposed US ally in the war on terror

LAHORE: For the past seven years the Bush administration studiously ignored the Afghan Taliban and Al Qaeda leadership gathering in the tribal areas of Pakistan, and now scrambles to make up for lost time. US elections are looming, and facing the humiliating prospect of Osama bin Laden outlasting a two-term presidency and even expanding his reach, Bush has pushed the Pentagon into a do-or die-hunt for bin Laden. Whether the search for an “October surprise” for the election succeeds or not, the radical threat is now beyond easy military solution.

It’s a sign of desperation that on September 16 the Chairman of the US Joint Chiefs of Staff Admiral Mike Mullen was in Islamabad meeting the Pakistan army chief General Ashfaq Kayani, his boss Secretary of Defense Bob Gates was in Kabul, while Pakistan’s newly elected President Asif Ali Zardari was in London begging Prime Minister Gordon Brown to get the Americans off his back and deliver aid to a beleaguered country rather than angry ripostes. 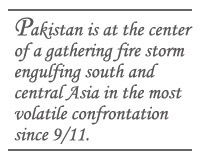 Pakistan is at the center of a gathering fire storm engulfing south and central Asia in the most volatile confrontation since 9/11. Pakistan, Afghanistan, the US and NATO all bear heavy responsibility for the crisis. Bush had neither the inclination nor urge to do right by Afghanistan, despite pleas by President Hamid Karzai to eliminate cross-border terrorist strikes from Pakistan and effectively rebuild the country. Senior US officers serving in Afghanistan say they begged the White House and the State Department for action in 2006, but Bush was cozy with Pakistan’s former President Pervez Musharraf and Iraq occupied US attention. Meanwhile, veteran John McCain flails in effectively playing the national security card against Barack Obama because Republican policies failed to secure the homeland against future Al Qaeda attacks.

The Pakistan military and Interservices Intelligence (ISI) saw Bush’s lack of attention as a free pass to re-engage the Taliban as a Pakistani proxy force. As outlined in detail in my book “Descent into Chaos: The United States and the Failure of Nation Building in Pakistan, Afghanistan and Central Asia,” the army hedged its bets against possible US and NATO withdrawal from Afghanistan or danger of India becoming too influential in Kabul, by moving pro-Pakistan Afghan leaders into Kabul and carving out a dominating position in Afghan politics.

Until this year, Pakistan appeared to be winning the game. Then the Afghan Taliban launched an unprecedented offensive against US, NATO and Afghan security forces, attempting to paralyze the country by cutting all major roads to urban centers, thereby depriving the people of supplies and Western forces of fuel and ammunition – 80 percent of which is trucked through Pakistan – and killing aid workers so what little development work is taking place comes to a grinding halt. 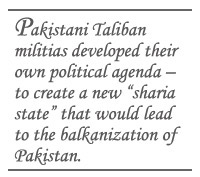 Catching the Pakistan military off guard was dramatic growth of the Pakistani Taliban. Pakistani Pashtun tribesmen in the border region were quickly radicalized by their Al Qaeda guests. Last year, Pakistani Taliban militias developed their own political agenda – to Talibanize northern Pakistan and create a new “sharia state” that would lead to the balkanization of Pakistan.

The Pakistani Taliban now control all seven tribal agencies that make up the autonomous region bordering Afghanistan called the Federal Administered Tribal Areas (FATA). They have spread across the North West Frontier Province (NWFP) through brutal terror tactics and threaten large towns. Poised on the borders of Punjab, the largest province, they’re joined by Punjabi and Kashmiri extremist groups.

US forces in Afghanistan launch almost daily attacks against suspected Al Qaeda hideouts in FATA and also target Afghan Taliban leaders such as Jalaluddin Haqqani. Pakistan’s military first denied the strikes, then virulently protested them. However on 3 September US Navy Seals put boots on the ground in FATA to demonstrate US seriousness and perhaps to also blackmail Pakistan to own up to US missile strikes and gain greater cooperation from the army. As a result, the army now says it allows US missile strikes despite public anger over Pakistan losing its sovereignty. 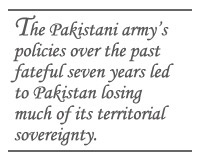 The army’s policies over the past fateful seven years led to Pakistan losing much of its territorial sovereignty. Heavily armed militant groups run wild, crime is rampant, paramilitary and police morale has plummeted with a stream of desertions. The country is in the throes of an economic meltdown. Foreign exchange reserves have halved in the past three months to less than US$8 billion, inflation runs at 25 percent, power shortages cripple industry and agriculture, and massive unemployment fuels a resentful populace.

Musharraf resigned, replaced by the ever-controversial Asif Ali Zardari, widower of Benazir Bhutto and leader of the country’s only national party in the country, the Pakistan Peoples Party, winning election with overwhelming support from the three smaller provinces of NWFP, Balochistan and Sind. But Punjab, with 65 percent of the country’s 160 million people, remains out of his hands, run by rival Nawaz Sharif, who refuses to take the terrorist threat seriously and befriends right-wing Islamic parties. Cleavage between the smaller provinces and Punjab has never been greater.

Zardari’s first tasks are to deal with the faltering economy and get a grip on the war against terrorism while satisfying international concerns. So far he has not much to show. Since the new PPP-led coalition government took office in February, it’s been locked in interminable battles with Sharif. If Zardari continues on those lines, Pakistan is sunk. Promising economic aid and demanding ISI reforms, a lame-duck Bush administration cannot rescue Zardari.

Zardari needs to develop a partnership with the army to fight the terrorists, but so far the army lacks strategy or coherence – one day bombing villages in FATA, the next day announcing ceasefires and offering compensation to militants. It has failed to protect the people of FATA – some 800,000 of a population of just 3.5 million have fled the region since 2006 – terrified of both the army and the Taliban.

The army has still not made the necessary strategic U-turn, giving up on the Afghan Taliban leadership who live in Balochistan. The ISI still attempts to separate the favored Afghan Taliban from the disfavored Pakistani Taliban and Al Qaeda. But the truth is that all operate under a common strategy and guidelines set by Al Qaeda. The aim for Al Qaeda is to use the coming months to take serious territory in the NWFP where it can re-establish safe bases and training camps it once had in Afghanistan.

The American answer is to send more troops to Afghanistan – 4500 are due to arrive soon and another 10,000 by next year – and pressure Pakistan. However the solution no longer lies in a single country. The Taliban are now a regional problem and the next US administration must generate a regional strategy that encompasses Iran, Pakistan, India, Afghanistan and the five Central Asian republics. 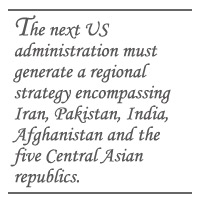 Western forces cannot win in Afghanistan without dealing with Pakistan, but the military will only change its colors when it feels more secure vis à vis India which has warm relations with President Karzai and Tajiks in northern Afghanistan. Likewise Iran, now arming groups in Afghanistan, needs to be addressed directly by the Americans. Going back to the UN Security Council to get a new mandate for a major regional diplomatic initiative, coupled with a massive regional aid program and widespread public information campaign that portrays the Western coalition as a regional problem-solver rather than a warmonger, are the needs of the hour.

However the issue is whether the next US president, Europe and NATO will have the courage and the will to take the bull by the horns and attempt something new rather than continue with a policy that has clearly failed.

Ahmed Rashid is the author of ” Descent Into Chaos: The United States and the Failure of Nation Building in Pakistan, Afghanistan, and Central Asia” and a correspondent for the Daily Telegraph. Click here to read an excerpt from his book.