Pakistan at the Crossroads – Part II

General Pervez Musharraf has been a key ally in the US war on terror, but opposition parties demand free elections as scheduled, even as Pakistan churns with political instability and street violence. Former Prime Minister Benazir Bhutto, in exile, is among the candidates ready to return to Pakistan and work for stability and moderation. In an exclusive interview with Bhutto – the second part of a two-part series on Pakistan – YaleGlobal Editor Nayan Chanda questions her about a power-sharing deal with Musharraf, the dangerous advantages militants might have if street protests erupt into the color revolution of the type seen in Ukraine, the demands for free elections, as well as the need for pragmatic policies including an end to Pakistan’s “traditional tit-for-tat approach” with India. Bhutto confirmed her intention to return to Pakistan “for saving my country from a militant takeover, [and] God forbid, disintegration.” – YaleGlobal

Pakistan at the Crossroads – Part II 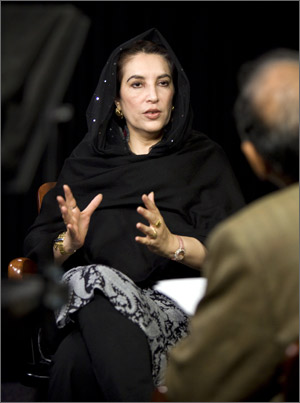 NEW HAVEN: Amidst a flurry of rumors about impending emergency rule in Pakistan, former Prime Minister Benazir Bhutto has warned that, without a peaceful transfer of power, Pakistan might witness a Ukrainian-style Orange Revolution with a difference. The winner might not be the political parties demanding democracy, but Pakistan’s armed extremists. “No one believed when the Shah of Iran was facing street riots that it will end up in an ayatollah revolution,” she said, drawing historical parallel in an exclusive interview with YaleGlobal.

Bhutto confirmed that, during a late July meeting in Abu Dhabi, she had discussed with General Musharraf the possibility of his giving up his army position and running as a civilian president with Bhutto as prime minister, her third term. But she said no concrete plans have been made, and there’s a feeling in Pakistan that instead of offering a deal the general may be giving her party “dheel” – local language for a long rope. 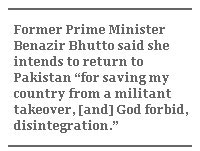 Bhutto addresses her warning about violent street protests helping the militants as much to General Musharraf and his political allies as to political opposition chafing for democracy. Deal or not, she said that she intends to return to Pakistan “for saving my country from a militant takeover, [and] God forbid, disintegration.”

In the interview Bhutto indicated that she would pursue a policy of non-interference in Afghanistan and give up the traditional tit-for-tat approach toward India that led Pakistan to overextend itself.

Of course, such assertions remain in the realm of speculation as Bhutto waits for Musharraf to deliver on the understanding reached in Abu Dhabi. Asked if Musharraf’s failing control prompted him to seek accommodation, she avoided a direct answer, but said that the rise of extremist violence and the gathering strength of a pro-democracy movement, as well as international calls supporting the democratic process, could be factors. She pointed to two major fault lines: “We have one on dictatorship versus democracy, and we have a second one on moderation versus fundamentalism or extremism… I think that General Musharraf is trying to seek a way out by having these contacts with the Pakistan People’s Party.” 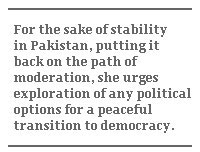 Her longtime political rival and recent ally, former Prime Minister Nawaz Sharif, criticized Bhutto for the secret Abu Dhabi meeting. In an interview with the Voice of America, Sharif said that the entire country is united about eliminating the army's role in politics. Alluding to Bhutto, he said, “forces that try to lend a helping hand to a dictator at this crucial juncture in history will be condemned by the nation.”

Bhutto justifies her talking with Musharraf as designed only to give peaceful transfer of a power a chance. For the sake of stability in Pakistan, putting it back on the path of moderation, she urges exploration of any political options for a peaceful transition to democracy. She argues that a peaceful transfer, if Musharraf can be persuaded, could avoid the possibility of a militant takeover.

Unlike the other political parties clamoring to start a pro-democracy movement straight away, Bhutto said her Pakistan People’s Party (PPP) prefers to wait, because a premature campaign might prompt Musharraf to impose emergency rule. However, she warned, “if the doors of the election are shut on us and the emergency is imposed or the elections are rigged, then certainly PPP with the other political parties, civil groups and NGOs in Pakistan will put pressure like in Ukraine during the Orange Revolution for the empowerment of our people.”

She is leery of street protests because the outcome is uncertain and could give advantage to armed extremists. She points out no one expected an “ayatollah revolution” in Iran. “But that’s what happened. And when the Mensheviks took to the streets in Russia, no one expected the Bolsheviks.” She adds, “I would do my best to do a peaceful transfer. But if that fails, maybe I won’t be able to stop the street agitation. And that would be dangerous.”

Bhutto did not categorically admit to meeting with Musharraf, but did not deny the terms of a political arrangement reportedly discussed in Abu Dhabi. She confirmed reports that issues discussed included Musharraf becoming a civilian president in charge of national security and foreign affairs; the lifting of a ban on Bhutto becoming prime minister; and her serving as chief executive. But she said, “We have not reached an agreement yet because everything the regime says it would do is post- presidential, prime ministerial and parliamentary elections.” Skeptical of Musharraf’s willingness to deliver on his promises in a phased implementation, she said: “My party does not want to be led up the garden path.”

Would she return to Pakistan to be interim prime minister if Musharraf gets reelected by the parliament? “No, I am not looking at this for myself,” she said, adding “I think this is the worst crisis that we faced since 1971.” She and her party seek cooperation with him – once the uniform is off. “The PPP cannot cooperate with a uniformed presidency which blurs the distinction between civil and military rule.” A free, fair election is necessary because, she said, “We won’t like a situation where the elections are manipulated and then we are offered a handful of ministries for legitimizing fraudulent elections.”

Throughout the interview, it was clear that Bhutto agreed with many Musharraf policies, including his approach to women’s representation in the parliament and resolving the Kashmir dispute. She seems ready to take a pragmatic approach in working with him to steer Pakistan toward a moderate course. She said her party wants peace inside the country and to put an end to the attacks on NATO and Afghan troops in Afghanistan. “We want an end to the militants who tried to hijack our foreign policy by conducting attacks on the Indian parliament and on other sites in India. So our world vision collides rather dramatically with the world vision of the extremists. President Musharraf has said he is for moderation, so we hope that he can do something upfront that can facilitate moderate forces coming together.”

She criticized Musharraf’s failure in curbing the Taliban and letting Pakistan become the preferred home for terrorists. She said that she rejected the policy of Pakistani interference in Afghanistan for military advantage in confronting India: “I want to end that policy of strategic depth..... I think for us it is much better to have an Afghanistan that is peaceful, that allows us to trade with it, that has good relations with all its neighbors.” That policy must go hand in hand with a new approach to India, she indicated.

Asked about the Indo-US civilian nuclear agreement, she said that the large size of the Indian market was a factor in the US decision: “I hope that at some stage we are able to be offered a similar civil nuclear cooperation, but I also want to take my generation away from the early generations’ view of tit-for-tat with India…. We need to pursue our core interests and not seek to so overextend ourselves that we begin to collapse from within. I think that is when the policy of strategic depth’s done. It is threatening Pakistan from within.”

Nayan Chanda is director of publications and editor of YaleGlobal Online. His most recent book is“Bound Together: How Traders, Preachers, Adventurers, and Warriors Shaped Globalization,” published by Yale University Press in May 2007.