Following a bitter split and violence, Britain's colonial rule over India ended 60 years ago this week, resulting in two independent nations, the Islamic state of Pakistan and the secular state of India. The division left many boundary issues unresolved and institutions in disarray, resulting in fierce nationalism, bitterness and wars. Those challenges, combined with military rule, tremendous corruption and inequality, have contributed to blocking Pakistan's aspirations for democracy. Under renewed military rule since 1999, Pakistanis seek a system of governance that provides fairness and opportunity for all, without foreign intervention. Indeed, Ahmed Rashid argues, "The demand for justice is a natural corollary of the demand for democracy, but it is also a root cause for unrest and upheaval in the Muslim world today." Given the opportunity, with support from the international community, Pakistan could stand as a model for democracy in the Muslim world. Yet, if the international community continues to give its opportunistic nod to military rule for the sake of fighting terrorism, frustration will grow among Pakistanis, only adding to the myth that the extremists fight for justice. – YaleGlobal 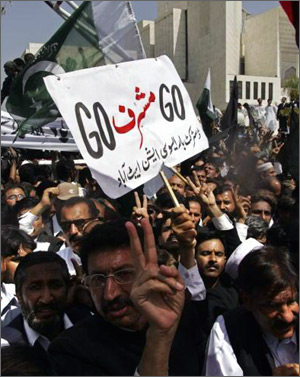 Time to go? General Musharraf's arbitrary dismissal of a judge proved to be the last

straw and ignited a middle class revolt in Pakistan

LAHORE: As a tense and wary Pakistan celebrated 60 years of independence on 14 August, there was no doubt that a profound movement of change has swept the country affecting many global issues - the struggle against Islamic extremism, the movement for democracy in the Muslim world and the danger of nuclear weapons. At the heart of the mass movement in Pakistan is a profound undercurrent that both the West and Muslims need to support - the demand for justice.

For four months, from March to July, millions of Pakistanis led by lawyers and other middle-class professionals marched in the streets to protest the arbitrary manner in which President Pervez Musharraf had suspended Iftikhar Mohammed Chaudhry, the chief justice of the Supreme Court. Ordinary people demanded justice, the rule of law, democracy and an independent judiciary free of control from the military. The lawyer protestors were reminiscent of those who had marched in 1945 in Indian cities before the creation of Pakistan. 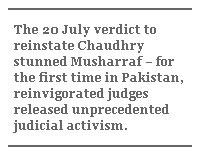 When Chaudhry was reinstated by a Supreme Court bench on 20 July, the verdict stunned Musharraf and was celebrated by the nation. For the first time in Pakistan, reinvigorated judges released unprecedented judicial activism. The Supreme Court swiftly issued pro bono, for the public good, verdicts on previously untouchable issues, such as examining the disappearance of political prisoners by the intelligence services and making the Election Commission independent of the military.

Before the verdict Musharraf had presumed he would easily win another term of five years as president and also be allowed to remain army chief by a supine parliament that has done the army's bidding since it was elected in a blatantly rigged election in 2002. Musharraf's election by the national and four provincial assemblies would be followed by another rigged general election.

Since the verdict Musharraf has thrashed around in a virtual state of panic as he tried to re-impose the army's presence on the political scene - now toying with the idea of an emergency rule, now martial law, while at the same time trying to be conciliatory towards the opposition by meeting in secret with exiled leader Benazir Bhutto and unleashing a charm offensive on state-controlled television. The biggest threat to his plans is the Supreme Court, which has pledged to follow the rule of law. Any one of several cases now awaiting adjudication by the Court could bring Musharraf's house crashing down.

For a country that has been ruled for half its life by the military, the present mass movement against continued military rule is more profound than expected. Underlying it and emphasized by the new lawyer-turned-politicians is the demand for social and political justice. The failure over decades to receive day-to-day justice at the hands of the army, the courts and the political elite now drives public activism. The demand for justice is a natural corollary of the demand for democracy, but it is also a root cause for unrest and upheaval in the Muslim world today.

What Pakistan has been witnessing in the past few months is emblematic of a fundamental cause behind the instability and turmoil in many of the world's Islamic countries. The lack of justice permeates every aspect of autocratic Muslim societies around the world and is an essential argument used by Islamic extremists from Osama bin Laden to Taliban's Mullah Omar. They can do so because justice is not just a democratic demand, but also the fundamental promise of the Koran. The Koran is permeated with demands for justice for the oppressed - be they Muslims or non-Muslim minorities or women. The most quoted Hadith, or sayings of the Prophet, also recount his dispensation of justice and his demand that all rulers do the same. 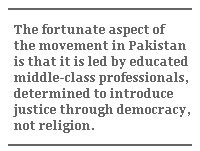 The lack of justice is a principal driver of the Talibanization now taking place in Afghanistan and in the Pashtun tribal areas of Pakistan. Where no social or political institutions exist or they have been totally corrupted and subverted, the first thing the Taliban offer is justice. When Islamic radicals occupy an area, they set up a sharia, or Islamic court of law - not because people necessarily demand sharia, but because such courts dispense quick, cheap justice.

The fortunate aspect of the movement in Pakistan is that it is led by educated middle-class professionals, determined to introduce justice through democracy not religion. This could have a long-lasting effect in helping win the wider struggle against extremism in the Muslim world.

However, the US administration retains tunnel vision in supporting Musharraf and army rule. The Bush administration failed to plan for a post-Musharraf era and now ignores the justice-through-democracy movement. Influential presidential Democratic candidates point out what Pakistanis have long known - that the US dependency on Musharraf and the US $10 billion aid money to the military since 2001 - has led to Musharraf and the army confidently double dealing the US on stopping Al Qaeda and the Taliban. In the face of failure within the desperate Bush administration, there is now open and dangerous talk of invading Al Qaeda sanctuaries in Pakistan.

With Musharraf hell-bent on persevering power, the risks multiply. Al Qaeda spreads its tentacles through several Pakistani proxies across the country, and a wave of suicide bombings target the army and police. In Balochistan a separatist insurgency by secular rebels, possibly backed by India and Iran, picks off Chinese workers - thereby creating a crisis with Pakistan's closest ally. 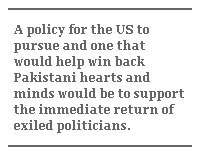 After 100 militants were killed in the army's July crackdown on the Red Mosque in Islamabad, where Islamic militants had holed out for six month, the Islamists promised revenge. Intelligence agencies report that more than 600 students who escaped the mosque siege have become suicide bombers. Then there is the elephant in the room: Pakistan's 40-odd nuclear weapons. Washington is considering how to deal with loose nukes if anarchy spreads and radical army officers take control of some nuclear weapons. In the past Musharraf rejected US offers of technical assistance in securing the weapons, out of concern about losing sovereign control. In the current heightened anger against the US, amid talk of unilateral intervention in Pakistan, cooperation on the nuclear front may be even more difficult.

Since 2001, the Bush administration has refused to accept that political stability in Pakistan is a prerequisite for fighting terrorism and the army acting alone could not guarantee that stability. Washington presumed that because Musharraf represented the army's big stick there was no need to look further.

A more reasonable policy for the US to pursue and one that would help win back Pakistani hearts and minds would be to support the immediate return of exiled politicians, early general elections monitored by international observers followed by a free and fair election for the presidency. Washington needs to help bring about a just political transition in Islamabad before it again insists that the army battle Al Qaeda. The US can then help ensure that the new elected political leadership works closely with the army to combat extremism. There cannot be a sustainable fight against extremists who pretend to fight for justice if those called to join the battle are not offered justice themselves.

The danger is that, if the present democratic movement for justice is deprived of international support and is left to wither, then it will be taken over by the forces of Islamic extremism. That would be a disaster not just for Pakistan but the entire Muslim world.