Almost as quickly as scientists upgrade vaccinations, communicable viruses are adapting – by genetic mutation – to break through vaccine barriers and transmit faster. Thomas Abraham warns against a "biological tsunami" that is "brewing deep within the microbial world": avian influenza virus, or H5N1. Bird-to-human transmission was once believed impossible, but recently several dozens of cases have been recorded. It is only a matter of time before this epidemic gains momentum and acquires human-to-human transmission capabilities. Society is ill-prepared for this looming threat, says Abraham, and those in the developing world will be hardest hit. The limitations to developing, producing, and distributing avian flu vaccines and antiviral drugs will likely widen the division between the world's rich and poor, leaving the "haves" healthier than the "have-nots." – YaleGlobal

When the next wave of influenza hits, the world's poor will stand to lose the most
Thomas Abraham
Friday, January 28, 2005 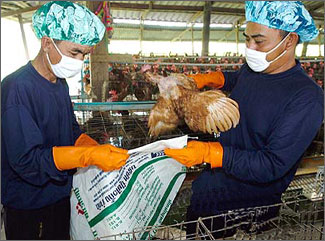 Can the avian flu be contained? Workers in a Thai chicken farm cull the infected, but at least one Thai mother got it from her daughter.

HONG KONG: A biological tsunami, which could dwarf the loss of lives caused by the giant waves that pounded south and south-east Asia, is brewing deep within the microbial world. If it breaks out in full force, a virulent new form of influenza – powerful enough to kill tens of millions of people – may spread throughout the world.

Tragically, such a pandemic will likely intensify the divisions between the world's rich and poor nations: While wealthier nations would have access to limited supplies of vaccines and antiviral drugs, the poor would die for lack of treatment.

The cause of this global pandemic would likely be the H5N1 influenza virus, which naturally infects birds. Over the last seven years, the virus has shown an increasing ability to infect human beings. The first known bird-to-human transmission was reported in Hong Kong in 1997, when a 3-year-old boy died after being infected. By 2004, the virus had spread beyond Hong Kong and southern China, to infect chicken and bird populations in Cambodia, Indonesia, Thailand, Vietnam, Malaysia, Korea, and Japan.

With these outbreaks came increasing numbers of human infections. As of last January, there have been 54 confirmed cases of the disease – and the numbers are growing, particularly in Vietnam. This new disease has a staggeringly high mortality: Of the 54 who caught the virus, 41 died – a fatality rate of 76 percent. Normal human influenza has a fatality of less than one percent.

Due to the nature of the virus, H5N1 influenza has thus far been confined to a relatively small number of human cases. The virus is essentially an avian virus – that is, transmitted among birds. All humans who have caught the disease so far have done so after contact with infected chicken. (The only exception appears to be the case of a Thai mother, who might have caught the disease directly from her daughter.) It cannot transmit easily between humans, as normal human flu viruses can – at least, not yet.

But the world of the influenza virus is one of incessant evolution. It is only a matter of time before the avian influenza virus picks up the genetic refinements that would allow it to pass easily from human to human. Once that happens, the world will face an epidemic that could, in a worst case, outstrip the HIV/AIDS epidemic in its deadly impact.

To understand the potential global impact, one must travel back to 1918, when a virulent new influenza virus swept the world. Soldiers travelling to and from battlefields spread the virus throughout the world. Asia was among the worst hit nations: In India alone, influenza is estimated to have killed between 10 and 15 million people. Victor Vaughn, a doctor at the forefront of the fight against the 1918 pandemic, observed, "If the disease continues its mathematical rate of acceleration, civilization could easily disappear from earth." By the time the epidemic died down a year later, it had killed more than double the 10 million who died in World War I. If, as is highly probable, the current influenza strain adapts to human transmission, it will spread a lot faster than did the 1918 virus; with the ubiquity of modern air travel, the virus could spread throughout the world in a matter of weeks. This, in turn, will mean that organizations like the World Health Organization (WHO) will find themselves fighting simultaneous global outbreaks.

Such a large-scale outbreak would be especially devastating in the case of avian flu. Due to the special circumstances surrounding the disease, vaccines and antiviral drugs would both be grievously scarce worldwide.

One particular problem involved in creating a vaccine, is that the traditional method of using embryonated chicken eggs to grow human flu vaccines will not work. The virus is lethal to chickens, and would kill the chick embryos in which the virus is supposed to grow to produce the vaccine. As a result, researchers have had to develop a process to genetically tailor a virus for vaccine development. Getting regulatory approval for producing a genetically engineered vaccine – and persuading commercial manufacturers to assume the risk of producing the vaccine – will all take time.

Vaccines against H5N1 influenza will also be difficult to develop for technical reasons common to all vaccines for unknown diseases. The vaccine cannot be manufactured in advance and stockpiled, as it must tailor-made to the virus. And at present, no one is sure what a H5N1 virus adapted to human transmission will look like. We will only know once the virus emerges and begins infecting humans in large numbers. It will still take around six months, at the very least, to produce a vaccine. By that time, hundreds of thousands could have been infected.

Even after technological problems have been resolved, poorer countries will neither have the money nor the political clout to access to vaccines, although they will likely be hardest hit. Vaccine manufacturing is concentrated in Europe, North America, Japan, and Australia, and in the event of a global outbreak, these producers would sell to their national governments first. As Dr. Klaus Stöhr, head of the WHO Global Influenza Program, pointed out, "Our concern is that during an influenza pandemic, vaccines will not reach developing countries until developed countries would have set aside their demands because (vaccine-producing) companies are there."

Antiviral drugs are a possible alternative to vaccines and can be used to both prevent and treat influenza in the early stages of the disease. But antivirals against the influenza virus are not produced in large quantities, because demand is generally low. Also, these drugs are expensive. According to a WHO document produced after a consultation meeting last April, "Current costs for even the shortest duration of treatment place these drugs outside the health budget in the vast majority of countries." The document goes on to say that there was "little hope that antivirals would be available in developing countries." After a recent meeting with vaccine manufacturers, a WHO expert group reported that increasing the global supply of antiviral drugs for flu required a lead time of at least a year, and it would take five years to build up adequate global supplies.

Developing countries at highest risk of avian flu, particularly in Southeast Asia, are the least likely to stockpile antiviral drugs against the possibility of a pandemic. Most of these nations already struggle with the scarcity of health resources, and a pre-emptive investment in expensive antiviral drugs would be out of the question; current health concerns would certainly take precedence.

As in the case of the Asian tsunami, the bulk of lives lost from a pandemic will likely be in poor Asian countries. In the aftermath of the tsunami, wealthy countries rushed to donate relief material and supplies; in the case of a disease pandemic, however, little aid will be forthcoming. Wealthy nations will be too busy protecting their own populations to be able to supply the needs of the developing world. And thus, the world emerging from a future avian flu pandemic may be sharply divided along socio-economic lines.

1 "WHO consultation on priority public health interventions before and during an influenza pandemic," http://www.who.int/csr/disease/avian_influenza.

Thomas Abraham is director of the public health media project at the Journalism and Media Studies Center, the University of Hong Kong. He is the author of Twentieth Century Plague: The Story of SARS (Johns Hopkins University Press 2005) thomas@hku.hk.