If the history of the world is the world’s court of justice, as 18th century historian Friedrich von Schiller suggested, then attempts to bury or deny unpleasant episodes can only fail. Since 1993, Japanese leaders have agreed to the Kono Statement, admitting that its military had forced women to serve as sexual slaves before and during World War II. Prime Minister Abe Shinzo, in his post just more than six months, reversed that stance, first suggesting that the women were not coerced and then offering an apology once again. International reaction is more puzzlement than outrage, as analysts attempt to discern the motives, writes author Alexis Dudden. Since 1947, Japan’s constitution strictly limits its military to self-defense, with the nation otherwise relying on the US. But the nation has a highly trained force, albeit described as civilian, and ranks in the top five nations for military spending. As the debate over amending the constitution continues, the prime minister’s reversal could be an awkward attempt to thwart a formal legal apology and protect the military’s dignity. But the stance undoubtedly troubles US lawmakers and powerful neighbors in the region, and could threaten Japan’s chance at winning a permanent seat on the UN Security Council. – YaleGlobal 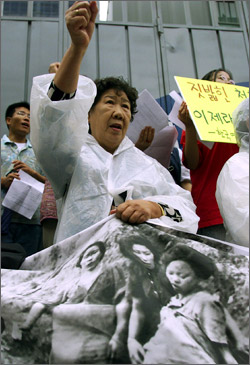 Denying the past to burnish the present: Former South Korean 'comfort woman'

NEW LONDON: Japanese Prime Minister Abe Shinzo upended his nation’s longstanding party line on March 1 when he said that there was no evidence of governmental “coercion” of women and girls as young as 11 into servitude in Japan’s notorious wartime system of sexual slavery. Since 1993, Japan’s leaders have publicly agreed to the Kono Statement, which asserts that “in many cases (the comfort women) were recruited against their own will, through coaxing coercion, etc., and that, at times, administrative/military personnel directly took part in the recruitments. They lived in misery at comfort stations under a coercive atmosphere.”

At stake are not the facts of coercion but the reasons for Abe’s reversals about the meaning of “coercion” and his current decision to avoid discussing the word entirely. Put simply, this is an attempt at whitewashing the record of the Japanese military before reinstalling them as a constitutional force. Abe’s determination to revise the 1947 constitution allowing Japan to operate its military had Washington’s open encouragement, which no doubt factored into his cavalier statements about the historical role of the military in the coercion of comfort women. 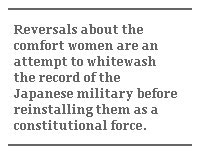 The prime minister’s statements about the comfort women system haven’t generated anywhere near the kind of outcry in Asia that Japanese leaders’ visits to Tokyo’s Yasukuni Shrine or sovereignty debates over a few islands have in recent years. Leaders throughout the region have issued the standard admonition that Japan “must learn its history,” yet only scattered groups of former comfort women and supporters have gathered in front of Japanese embassies, in marked contrast to the tens of thousands on the streets of Beijing and Seoul two years ago, smashing Japanese businesses and burning Japanese leaders in effigy to protest Japan’s unrepentant behavior.

Growing economic integration and fading memory is one reason. Reviving unpleasant memories of the surviving comfort women makes their own societies nervous for the obvious reasons of women’s place in society and the unease that the category of sex crimes generates.

The current fracas about the comfort women and Abe’s remarks is between Japan and the US, stemming directly from a proposed nonbinding House Resolution asking Japan to “formally acknowledge and apologize for the Japanese Imperial Armed Forces’ World War II-era coercion of some 200,000 young women into sexual slavery.”

Hours before Abe made his now career-defining comment, he attended a study group within his party that has met for years seeking, among other things, ways to counter Tokyo’s stated position on the comfort women’s history. Subsequent reversals indicate that Abe unwisely allowed the group’s exuberance to spill onto the floor. Almost 130 members of parliament are poised to challenge the Kono Statement. Some, such as Nakayama Yasuhide, reveal that youth or international education and experience aren’t factors. In a recent interview with the “Tokyo Shimbun,” Nakayama expressed the group’s sentiment: “People criticize the Japanese government's diplomacy as kowtowing to the US. If there is evidence or facts to substantiate that Japan did not carry out sordid things, we must make every effort to correctly grasp what happened and stake out our position."

Shortly after Abe acknowledged his disagreement with the government’s stance, he appeared on Japan’s national broadcasting station, NHK, to renew his “apologies” to the women as well as to vow to sustain the Kono Statement. International outrage clearly sensitized Abe’s advisors to understand that now is not a good time for the prime minister to question women, 80 to 90 years old, and their horrific stories of abduction, rape, and torture that they tell with painful similarity.

Abe and his friends’ continuing remarks indicate, however, that they aren’t convinced that he or they are wrong. Party policy chief Nakagawa Shoichi told reporters, “There's currently no evidence that permits us to declare the military, the strongest expression of state authority, took women away and forced them to do things against their will.”

Interestingly, the denials and reversals have focused mainstream American discourse on Japan’s apologies for the nation’s wartime past, which the proposed House Resolution hasn’t done. Until now, most American media outlets and Japan pundits viewed the problem as an Asian detail, something that concerned leftists and nitpicky academics. By mid-March, Washington’s Heritage Foundation was on board, urging a “sincere apology by Japan's PM – one approved by the Diet – for the nightmares inflicted upon these innocent women.” On March 26, US State Department spokesman Tom Casey announced, “We certainly want to see the Japanese continue to address this and to deal with it in a forthright and responsible manner that acknowledges the gravity of the crimes that were committed.” Within a heartbeat, the long-elusive goal of surviving comfort women appears as if it should have long ago been a matter of fact.

The Japanese government has regularly apologized to the comfort women since 1992 when historian Yoshimi Yoshiaki first discovered documentary proof linking the military to the system. Despite such statements the nation’s parliament has never transformed the sentiment into law, which is what victims want. Japan’s apology failure persists because the government and Japanese society are far from making the substance of the nation’s 20th century elemental to modern Japanese history. The indefatigable members of Tokyo’s Women’s Active Museum on War and Peace struggle to support the women within Japan because the nation’s multimillion dollar denial industry has so much traction. The majority of Japanese don’t believe that the content of their elected politicians’ apologies – the human cost and living legacies of Japan’s empire and total war embodied by the surviving comfort women – are central to Japanese ethical concern. If they did, the Heritage Foundation’s proposal would have come about years ago, and thousands more victims would have heard the results before they died. 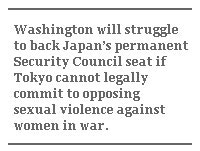 Given the stakes involved significant policy implications will arise. All the talk about the importance of shared values in the US-Japan alliance makes it almost impossible for Washington to back Japan’s still hoped-for permanent UN Security Council seat if Tokyo cannot legally commit to opposing sexual violence against women in war. American Ambassador Tom Schieffer told Japanese reporters, “Engaging women in trafficking or the sex trade against their will is something that is going to find no constituency in the United States.... It would be a mistake to underestimate the impact of this issue in the United States.” He asserted, moreover, that the women were “raped.”

Schieffer raised another matter that will become increasingly difficult for Washington by reassuring his Japanese audience that they wouldn’t become isolated in the North Korea talks because “they have abductees that they want an accounting for.” Yet, as the Koreans routinely point out, this position is untenable if Japan cannot come clean on its own history of abductions.

At first Abe’s remark wasn’t really news in Tokyo, and the Japanese press remains ambivalent about how to follow the story: Right-wing and right-leaning papers like the “Sankei Shimbun” and the “Yomiuri” daily blast the US for misunderstanding Japan’s policies, while the centrist “Asahi” hopes to deliver calm with Abe’s promise to fall in line with the government’s original position. Only the communist party’s “Akahata” enjoys the moment as Abe and his supporters basically write the news for them.

Underlying Japanese ambivalence about what happened to the comfort women more than 60 years ago is the division about how Japan should exercise its future military power in a new Asia with uncertain US influence and rising China.

Alexis Dudden is associate professor of history at Connecticut College and author of “Japan’s Colonization of Korea: Discourse and Power,” University of Hawaii Press, 2005.