Peace and stability in an expanded Europe cannot be separated from the fortunes of its giant neighbor to the east, Russia. President Vladimir Putin, who was recently won a second term in office, talks of being the president of a free people in a free country, but his actions so far have been marked by a strong autocratic streak. A leading Russia specialist and former Deputy Secretary of State, Strobe Talbott, says that Russia's success in coming years depends on whether Putin is willing and able to bring his authoritarian walk in line with his democratic talk. During his first term in office, Putin has brought stability to the country, to be sure, but it has come at the expense of the freedom he says he wants to promote. He has intimidated into submission, drove into exile or in some cases imprisoned oligarchs who could challenge his power. He has also all but eliminated the independence of the judiciary, taking the country in the direction of a virtual one-party state. Not being a candidate to join the European Union, Russia is not under the kind of pressure that former Russian satellites have been to open up their political and economic systems. But, Talbott says, since Putin is formally in favor of political freedoms and an open society, his friends and partners in Europe and in Washington should be able to nudge him in that direction during their coming meetings. - YaleGlobal

Economic realities and Western nudging may yet change his gait
Strobe Talbott
Wednesday, May 12, 2004 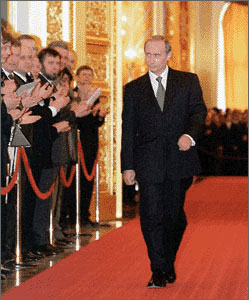 At his inauguration, Putin strutted like an emperor, not a president.

STOCKHOLM: Vladimir Putin said all the right things when he took the oath of office for his second term as President of Russia on May 7. “Only free people in a free country can be genuinely successful,” he proclaimed. His right hand resting on a copy of his country's constitution, he endorsed pluralism and disavowed authoritarianism. Then, at the conclusion of the ceremony, he strode briskly down a long, red-carpeted aisle, barely acknowledging the 1,700 political, social and religious leaders who were standing behind rope lines and applauding politely as he passed.

Having watched the spectacle in the Grand Kremlin Palace on television, one of Russia's liberal reformers, whose party had been crushed in the latest elections, commented, “This was the perfect Putin moment: he talks the talk of a democrat, but he walks the walk of an autocrat.”

What kind of country Russia turns out to be over the coming decades may depend in no small measure on whether Putin, during the remainder of his presidency, is willing and able to bring his walk into sync with his talk. 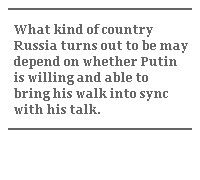 In his first term, Putin cracked down on free radio and television; rolled back at least some aspects of “glasnost” (the policy, initiated by Mikhail Gorbachev and accelerated by Boris Yeltsin, of telling the truth about Russia's past and permitting criticism of present policies and leaders); intimidated into submission, drove into exile or — in the case of Mikhail Khodorkovsky — imprisoned oligarchs who tried to convert their vast wealth into political power; all but eliminated the independence of the judiciary; and moved in the direction of creating a virtual one-party state.

There are several reasons for this worrisome trend. One is institutional. When the old Soviet state collapsed, the only structures that survived largely intact were the so-called power ministries and security services. Putin is a veteran of the secret police. Many of the people on whom he relies share his background and therefore his instincts.

Moreover, Russia's political culture is receptive to the kind of strong leadership Putin has provided. It is too simple to call what is happening in Russia today a return to dictatorship. Putin's firm-hand policies are popular; they have an electoral and parliamentary mandate. He is the personification of the Russian version of what Fareed Zakaria has called “illiberal democracy.”

Russians' apparent preference for that kind of system is not encoded in their genes or determined by their history under czars and commissars. Rather, it is a consequence of their recent experience. During the nineties, many citizens came to identify the economic reforms encouraged by the West with hardship and the privatization of state property with inequity and the enrichment of the oligarchs. The resulting backlash fueled electoral victories for fascists and communists.

By the same token, many Russians today are dismissive of Western criteria on what constitutes an acceptable level of political freedom and civil society. Putin has promised them a “stable, democratic” state. Insofar as there is a tradeoff between those two attributes, many Russians prefer stability. Putin's constituents accept, and even embrace, the substitution of order and discipline for the raucous free-for-all of multi-party democracy.

There is another factor as well: the ambiguity of Russia's relationship with Europe. Putin prides himself as a native son of St. Petersburg and a bearer of Peter the Great's legacy. He speaks of his country's “Western vocation.” But Russia is beyond the gravitational pull of the European Union's political values and norms. 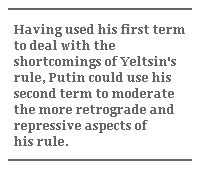 A cluster of former Soviet republics and satellites — Poland, Hungary, the Czech Republic, Slovakia, the Baltic States — all suffered their own version of reform fatigue. But the prospect of membership in the EU gave them the fortitude and confidence to stay on course. That inducement is likely to have the same salutary effect in the years ahead on other candidates for the EU: Bulgaria, Romania and, crucially, Turkey.

Russia, however, is not an applicant for the EU and would be unlikely to be accepted any time soon if it were to apply. That fact makes many Russians feel they are essentially on their own, a Eurasian special case rather than a real European country. They want to modernize their country, but they are determined to do it their own way, not according to some Western formula or by Western standards.

Pessimists among Putin's liberal critics see him as the embodiment of that view. They lament that Russia's 13-year experiment with democracy has failed. They predict that it will be a generation or more before Russia recovers from the current backsliding and once again orients itself toward the rule of law, an open society, and pluralistic politics. 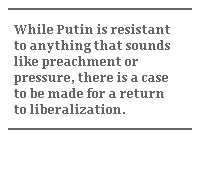 Optimists counter that “generations” are changing quickly — and that many younger politicians, notably including those associated with Putin's “party of power,” are more pragmatic than their nationalistic, demagogic elders.

Putin's overwhelming re-election gives him broad scope in defining what kind of leader he wants to be for the next four years — and where he wants to lead Russia. Having used his first term, as he sees it, to deal with the excesses and shortcomings of Yeltsin's rule, he could use his second term to moderate the more retrograde and repressive aspects of the way he is running Russia.

Granted, he will not be under much pressure to move in that direction from the business and political élites, the electronic media, or the parliament, all of which he has rendered largely subservient.

But he may be susceptible to the logic of what Russians call “life itself.” If the high oil prices on which Russia so depends were to drop, Russia's economic growth would be in jeopardy — and with it Putin's popularity. If Putin lets the remnants of the massive, stifling bureaucracy reassert themselves, they may thwart his effort to make the machinery of the state more efficient.

Another potential source of inducement for Putin to moderate his own hard line is the influence of Western leaders. During a visit to Moscow shortly before Putin's inauguration, a number of the Russians I spoke to were convinced that the West has more leverage on Russia than it is currently using. While Putin is resistant to anything that sounds like preachment or pressure, there is a case to be made, based on Russia's — and Putin's own — self-interest, for a return to liberalization: a prosperous, free-market economy can only emerge in an environment characterized by policies and institutions that promote and protect political freedoms and an open society.

Since Putin said as much in his inaugural address, this is a case that his friends and partners in Europe and in Washington should be able to reinforce. They will have an opportunity to do so at the Sea Island meeting of the G-8 in June, and between then and 2006, when Russia will be hosting a G-8 summit of its own — and when it hopes to enter the World Trade Organization.

It is very much in the West's interests to put the evolution of Russian politics on the agenda for those meetings, since as history has repeatedly taught us, Russia's external behavior is ultimately, and deeply, rooted in the nature of its internal system.

Strobe Talbott is the president of the Brookings Institution (www.brookings.edu). He was deputy secretary of state in the Clinton administration and the first director of the Yale Center for the Study of Globalization. He is the author of “The Russia Hand: A Memoir of Presidential Diplomacy”, 2002.