One year ago, the European Union seemed to be on a roll. Membership had grown to 25, and many in the Union saw a united Europe as the surest method of challenging American hegemony. Now that dream may be on the brink of failure, writes Jonathan Fenby. If public opinion polls are correct, French voters will reject the proposed European constitution in a May 29th referendum. A "no" vote would complicate the interactions of member states, prevent the appointment of a single EU Foreign Minister, and increase the growing suspicion many Europeans now feel towards the Union. Why the dissatisfaction? Parties on the left and right are mobilizing voters against the EU's free-market reforms and fanning fears about an influx of cheap labor. There is also concern about increasing the Muslim population by the admission of Turkey. But at the root of the current concern is domestic discontent, says Fenby, and a sense that leadership in Brussels is too far removed from Europeans' everyday lives. And from France's Chirac to Germany's Schröder, the unpopularity of many European leaders may further reduce their chances of selling the Union to an already suspicious public. – YaleGlobal

A French "no" vote on the new constitution would be a blow to the fledgling organization
Jonathan Fenby
Wednesday, April 27, 2005 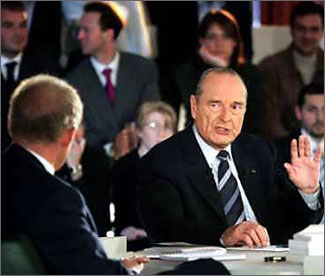 Jacques Chirac in a box: Having taken the lead in drafting the EU constitution, the French President is now struggling to get a 'Oui' from a skeptical citizenry. (Photo: Reuters)

PARIS: What a difference a year makes. Around this time in 2004, European Union leaders meeting in Dublin celebrated the enlargement of the union from 15 to 25 states. The hope was that the European Union could present itself to the world as a model of non-confrontational harmony between nation-states working for the common good.

Now, with French public opinion turning against the proposed new constitution, President Jacques Chirac – and indeed the dream of a united Europe – is battling to survive. A once unthinkable prospect – that France, a central player in the European project, will reject the proposed constitution in a May 29 referendum – now threatens effectively to sink the project. That, former European Commission President Romano Prodi warns in apocalyptic terms, would mean "the fall of Europe."

In fact, the EU would continue to function, but its future direction would remain in question. Rejection of the constitution would deal a major blow to the ambitions of those, notably Chirac, who would like the continent to act as an international counterweight to Washington; the current President of the EU Council of Ministers, Prime Minister Jean-Claude Junker of Luxembourg, has noted pointedly that Washington "would not be unhappy" with a French "no" majority. Such a vote would complicate the workings of the community's two dozen states, halt plans for a single Foreign Minister to represent all member countries – and underline the fragile position of many national governments as they grapple with the need for structural economic reforms.

Why the new round of pessimism about the EU? In short, it may be fear about the declining welfare society, loss of sovereign control, and worry about immigration. Both right-wing nationalists and left-wingers have criticized the Commission for being too market-friendly and for threatening the social benefits cultivated since World War II. But the current wave of doubt is fuelled primarily by domestic factors, underpinned by a feeling that the Brussels-based bureaucracy is too powerful and remote from everyday concerns.

The constitution is not the only problem on the European horizon. Both France and Germany have blown a large hole in the rules underpinning the euro by letting their budget deficits rise above the 3 percent ceiling set by the Maastricht Treaty, which established the common currency five years ago. Italy may now follow suit. Smaller countries, like the Netherlands, which tightened their belts to meet the criteria, are angry. The chances of Britain's joining the euro group grow fainter by the month, particularly since the skeptical Chancellor of the Exchequer, Gordon Brown, will likely succeed Blair next year.

Enlargement, seen by pro-Europeans as a historic move after the end of the Cold War, is now causing discontent; some Western European countries fear an influx of cheap labor from the east, the transfer of factories to new member states, and competition from countries with much lower tax regimes. Links between some East European governments and Washington, epitomized by their backing of the war in Iraq, exacerbate the division between new members and those who see the EU as a bulwark against US hegemony. Entry talks with Turkey are also stoking controversy, particularly in France, which has the continent's largest Muslim population.

French opinion polls, which have reported a significant majority for the "no" vote all month, reflect discontent with the Chirac administration, rather than hostility to Europe; an internal vote in the main Socialist opposition party favored the constitution. The thought of France turning against Europe would have been unthinkable only a short time ago – and the government may mobilize apathetic voters to save the day. But when President Chirac went on television to appeal for support for the constitution, the polls showed a rise in those intending to cast a negative ballot.

Rising doubts in another original European partner, the Netherlands, are, similarly, more a function of domestic issues than of the kind of euro-skepticism which would face Britain's Tony Blair if he holds a referendum on the constitution next year. By eliminating the document, a French "no" vote would get the Prime Minister off the hook.

Europe's difficulties call for forceful, inventive leadership. But that is sorely lacking. Governments are finding it very hard to sell the constitution to voters. The new EU Commission, which took office at the start of this year, is running into a roadblock of national interests as it seeks to introduce reforms; this spring, German and French opposition forced the side-lining of a project to create a single European market for services.

Above all, the leaders of the main European countries are far from dominant domestically, with repercussions for their stance on Europe. Though the Labor Party will probably return for a third term, the British election campaign has revealed a deep divide between Blair and the electorate, which has lost trust in the Prime Minister over Iraq and delivery of improvements in public services. In France, Chirac's poll rating has dipped below 50 percent, and Prime Minister Jean-Pierre Raffarin's numbers wallow at around 35 percent.

In Italy, divisions in the ruling coalition and heavy losses in regional elections forced Prime Minister Silvio Berlusconi to resign in a bid to find a new government line-up that could see him through to national elections next year. And in the biggest EU member country, Germany, Chancellor Gerhard Schröder has had a bad run in state elections; by introducing limited reforms to Germany's tight labor laws and abundant welfare system, he has earned unpopularity among his party's traditional supporters. The country's economy, once the motor of Europe, is in the doldrums, and extremist parties have begun to win votes at regional elections in the depressed former East Germany.

In this context, national leaders focus on domestic affairs, and seek to avoid courting further unpopularity with voters. Europe has hardly been mentioned in the British election campaign, for instantce. Few people have read the constitution. During Chirac's recent televised bid to promote the constitution, the carefully selected audience of young people departed from the script, peppering him with questions about unemployment and other domestic issues. As the French commentator, Christine Ockrent, put it, the President's words "seemed to bounce like marshmallow against a wall of anxieties that had little to do with the constitution, but more with the policies of his unpopular government. As to Europe, what these young people were expressing was not so much disaffection as ignorance."

With growth low and unemployment high, the people of Europe are in a sour mood. The high ambitions of the pro-Europeans who had their heyday in the 1990s are being dashed by more basic realities. Since World War II, the continent has enjoyed one of its longest periods of peace and prosperity. Now, that appears to be taken for granted. The "European model" of peaceful cooperation and mutual agreement – contrasting with the Bush administration's more muscular, martial approach – is in danger of being reduced to a resigned acceptance of the path of least resistance, dictated by the lowest common denominator. How far Europe has travelled from the hopes of 2000.

Jonathan Fenby is a London-based commentator on international affairs and author of On The Brink: The Trouble with France (Abacus Publishing).