The highly anticipated French referendum on the EU constitution arrived this weekend: The vote was a resounding "Non." And with the Netherlands casting an even more strident "Nee" vote, observers, both European and worldwide, now wonder what lies ahead for the European Union. YaleGlobal examines the fallout of the referendum in a two-part series. In part two, John Brenkman reconsiders French and Dutch disinterest in the EU constitution, locating their dissatisfaction not in economic or political excuses, but in a more fundamental problem: "Europe does not inspire even its own creators." One can hardly blame them, writes Brenkman; the usual image of the EU – the one presented by French politicians – is of a remote body interested in administrative drudgery. Yet as he compares Europe and the United States, Brenkman finds the global role of the EU to be a new kind of empire that spreads democracy through peaceful coercion. However, the European leaders must find their own motivating myth to inspire their citizens to embrace a grander mission. – YaleGlobal

The EU leaders must inspire their citizens with their vision of a democratic Europe
John Brenkman
Thursday, June 2, 2005 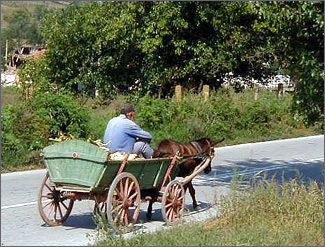 Long road to EU: After two 'No' votes, Romanians and other candidates may have a lengthy wait to join the group

NEW YORK: France has been the driving force behind the European Union for decades, and yet on Sunday, the French balked at embracing their own creation. They do not identify with it, they do not imagine themselves acting through Europe or as Europe. The solid rejection of the European constitution certainly underscores problems in the French political system and points up the drawbacks of a "constitution" that is an administrative tome of several hundred pages rather than a brief literary-political document addressed directly to every citizen. The deeper problem, though, is that Europe does not inspire even its own creators.

The crisis precipitated by France was intensified when voters in the Netherlands, another of the EU's original six founders, also rejected the constititution and by an even larger margin. It is time to examine afresh the sources of a European motive and will. The French and Dutch votes reveal the problem of a merely proceduralist Europe, which has timidly confined its political presence in the world to the administrative drudgeries of Brussels and the barely noticed parliamentary maneuvers in Strasbourg. Even as a new type of political entity has been emerging, its citizens and politicians have yet to find a common and binding representation of their new Europe.

The nation does remain the center and circumference of American foreign policy, while European countries see that their influence on international affairs can only be achieved through transnational endeavors. History and geography will leave this difference intact for some time. Nevertheless, many observers err in casting the US-European difference as a polarity.

There are to be sure major differences in the ways the US and Europe treat the role of the state in regulating the market and blunting the ill effects of capitalism, but while those differences are magnified in domestic debates between neoliberals and social democrats, they look much smaller when compared to nondemocratic countries, from Saudia Arabia and China to Pakistan and Russia.

The United States and Europe are not merely committed to democracy and capitalism, they are also devoted to spreading democracy and capitalism. The American approach to this task has often been called "empire," with military strength playing a decisive role. Today, however, the power that seems to be spreading democracy and capitalism most effectively is the European Union. Since the fall of the Soviet empire, the European Union has expanded to include no fewer than 25 nations, including many Central and Eastern European countries that had been under Soviet domination. EU membership requires that a country meet stringent political and economic standards, including an array of social as well as political rights. Formally a negotiation, the acceptance of new members has its coercive aspect. While application for membership is voluntary, exclusion from the EU for any country that lies on its frontier would ultimately spell economic disadvantage and decline. The very existence of the EU makes the stakes of failing to conform to its demands very high. Usually the petitioning country's more dynamic political and economic elites are especially aware of the advantages of membership for themselves and for their nation. The EU's soft coercion imposes rules and regulations that would often be politically unattainable by the prospective member's own leaders.

It is possible, then, that this is actually the emergence of a new kind of empire. An empire that conquers by incentives, negotiations, and requirements. An empire that radically reforms every candidate for membership before absorbing it as a partner on equal terms. An empire that relentlessly widens its borders and extends its territory in order to spread democracy and capitalism. An empire that creates a free market among its members, a market that is at the same time carefully regulated within the terms of the Union's continual compromises between neoliberal and social-democratic policies. An empire that, most essentially, requires of each newly absorbed country that it grant its citizens and resident aliens the world's most extensive set of political and social rights.

Europe is an empire of rights. Its experiment is so bold that many of its oldest members have recoiled in recent years, especially as expansion incorporated countries once considered lost to Asiatic despotism and now more neo-liberal and pro-American than the peoples of Western Europe. The boldest overture of the EU thus far has been to accept putting Turkey on the path to membership, setting off considerable anxiety and backlash. European expansionists urge Europe to pursue more countries that were once part of the Soviet empire, including in Central Asia, in order to counteract the autocracies and religious sectarianism that threaten to sweep the region.

The No was voiced by a coalition of the unwilling, splintered among those who cannot imagine France advancing its values and glory through Europe; those who, ostrich-like, think it easier to fight for social-democratic ideas on a national than a European scale; and those who cannot envision Europe except as a geo-imaginary Christendom. These splinters could momentarily be bound together and driven like a stake through the heart of the fiend "Europe" because the citizens of France lack the motive and will to be European.

To awaken, unify, and act, Europe needs what the philosopher Peter Sloterdijk has called a mytho-motive, that is, a rich ambitious imagery and symbolism by which its citizens can find their identity and give Europe, as Europe, a mission. Historically, what has Europe been as myth and motive? The answer, with all its disturbing resonance, is that whenever Europe has projected itself as Europe, it has done so as Empire. Post-Cold War Europeans have to reimagine themselves accordingly. Political identity and political projects cannot be invented whole cloth, nor can they be adequately sustained solely by loyalty to constitutional principles and procedures. They must emerge as the rewriting of deep-seated myths and narratives, a challenge all the more daunting for Europe since the last projections of its Empire myth led to catastrophe. The new Europe must, in Sloterdijk's words, "become the workshop of a metamorphosis of Empire." The rewriting must "replace the principle of Empire itself with that of the union of States in an act creative of a political form that will inscribe itself in the history of the world."

Beyond the foibles of French politics, the difficulty of constructing Europe involves not only institutions but also symbols and myths. The French shrunk from greatness this week because their leaders made the arguments for Europe look small, cautious, defensive. The project of European Union is to create an Empire of Rights: democratic, capitalist, expansive, inclusive. So long as Europeans continue to grope for their animating motive and myth, the promise of transnational cosmopolitanism will remain rather empty.

John Brenkman, Distinguished Professor of English and comparative literature at the CUNY Graduate Center and Baruch College, directs Baruch College’s US-Europe Seminar. His book Democracy at War will be published by Princeton University Press in 2006. He lives in New York and Paris.