Russia Plays the Oil Card with a Divided Europe

Britain is smarting from Russian refusal to hand over its citizen sought for murder charges in London. Russia's President Vladimir Putin and European Union leaders recently clashed over democratic freedoms at an acrimonious summit overshadowed by Moscow’s decision to ban Garry Kasparov, chess legend turned opposition leader, from traveling to Samara, the venue of the meeting. The Russian leader, in turn, criticized the treatment of ethnic Russians in EU members Estonia and Latvia as "unworthy of Europe." This is just the latest turn in Moscow’s growing prickliness. With Russia’s economy riding high boosted by oil prices, Putin has been taking a tougher stance against both Europe and the US. Oil boon aside, Putin’s leverage in his negotiations with the EU can be attributed in part to the inability of the member nations to agree on a common strategy for dealing with Russia: Former members of the Soviet Union urge a tough response. Meanwhile, the UK, Germany and France are willing to use their traditional “soft power” tools of trade and diplomacy to forge a “strategic partnership” with the Kremlin. One expert notes, in fact, that the acrimony in Europe-Russia relations has quickly risen to Cold War levels and shows little sign of subsiding. As journalist Shada Islam suggests, Putin will continue to have his way until European governments can agree on a mutual response to Moscow’s aggressiveness. – YaleGlobal

Russia Plays the Oil Card with a Divided Europe

Despite opposition from new members of the EU, desperate for energy, Europeans give in to Moscow
Shada Islam
Thursday, May 24, 2007 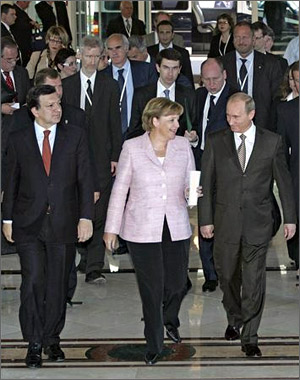 BRUSSELS: When the mood is sour every minor irritant can become a major impediment to relations.

The row between Estonia and Russia over Tallinn's decision to remove a Soviet-era war memorial from the center of the capital has injected new strains into Moscow's already tense relationship with the European Union (EU) and the North Atlantic Treaty Organization (NATO).

The episode has also fueled fears of a new East-West split reminiscent of the Cold War. In recent months, a testy Russia has opposed Poland and the Czech Republic's plans to accept elements of a US missile-defense system stationed on their territory and threatened to freeze participation in a key European arms-control pact. EU and NATO policymakers struggle to forge a new strategy to deal with an assertive, energy-rich – prickly – Russia. But their efforts are hamstrung by strong differences among key European governments on policy toward Moscow and EU dependence on Russia's vast energy resources.

Relations have soured enough for senior officials to worry about it openly. The EU-Russia relationship contains a "level of misunderstanding or even mistrust we have not seen since the end of the Cold War," warns European Trade Commissioner Peter Mandelson. 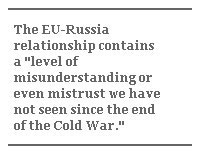 Given the importance of NATO-Russian ties as a "fundamental strategic bridge," NATO spokesman James Appathurai says Moscow's new tough tone on East-West security questions is worrying. "Nobody can ignore concern over the rising level of rhetoric over a range of strategic issues."

While recognizing that Moscow is becoming a difficult partner, European governments are split between those who want to play tough with Russia on issues like energy and human rights and others keen to woo the country by using Europe's traditional "soft power" tools of aid, trade and diplomacy.

To some extent, the divide is based on history and geography. Russia's direct EU neighbors and former allies – including the three Baltic states and five eastern European countries which joined the bloc in 2004 – lobby hard for a tough stance against their former Soviet patron and argue that Moscow's renewed imperial ambitions threaten its

neighbors. These nations are also convinced of Russia's determination to use its energy resources as a political weapon.

Estonia, locked in a heated wrangle with Russia over removal of monuments, called for the cancellation of the EU's annual summit talks with Putin. Poland refuses to give the go-ahead to launch negotiations on a long-sought EU-Russia cooperation pact and is preparing a resolution on national monuments that would also remove symbols from the Nazi or Soviet eras.

But others, including powerful players like Germany, the UK, Italy and France push for a "strategic partnership" with Russia, covering joint efforts to combat climate change, stronger energy links and cooperation with nearby countries, including Ukraine, Georgia, Belarus and Moldova. 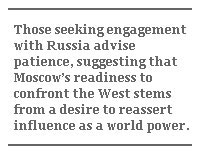 Those seeking engagement with Russia advise patience, suggesting that Moscow’s readiness to confront the West stems from increased wealth and a desire to reassert its proper influence as a world power. EU trade chief Mandelson urges Europeans to be more understanding of Russia's vulnerabilities, arguing that while Europeans see NATO and EU enlargement as the extension of stability, prosperity and democracy, Moscow views such expansion as "associated with Soviet territory dismembered; its previous sphere of influence eroded." Adds Mandelson: "They feel increasingly encircled by the West and wedged up against a rising China."

Javier Solana, EU foreign and security policy chief, also appealed for "calm," suggesting that given the nation’s global clout and vast energy resources, the EU and Russia must forge a "deep and solid relationship."

He also argues that the West needs Russian help in solving an array of problems, including efforts to convince Iran to suspend uranium enrichment and the search for a final settlement for the breakaway Serb province of Kosovo.

EU newcomers have little time for such arguments, however. Following Russian protests at Warsaw's decision to follow Estonia's lead by removing Soviet-era monuments, Polish Culture Minister Kazimierz Ujazdowski insisted: "I call on our partner in Russia to recognize the facts: Poland is a sovereign state." A Czech Foreign Ministry statement warned Moscow that that it is up to each state to decide how to cope with the past: "Pressure exerted by another state is, as a rule, counterproductive." 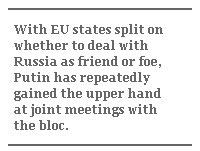 Since the brief cut-off of Russian gas supplies to Ukraine in January 2006, a move that also disrupted deliveries to several western European states, Moscow has successfully used its energy resources to divide Europe. The EU depends on Russia natural gas for 25 percent of its needs, but the rate is higher in countries like Germany. Berlin is at loggerheads with Sweden and Poland over the construction of a Baltic Sea undersea gas pipeline, primarily financed by Russian state-owned gas giant Gazprom and German energy companies E.On and basf.

Central and eastern European countries oppose the Nord Stream pipeline, which will bring Russian gas supplies to Germany before distribution to the UK, France, the Netherlands and others, and they fear higher energy prices. Countries bordering the Baltic Sea led by Sweden criticize the pipeline from an environmental perspective, arguing that a Russian naval presence in Sweden’s economic zone would pose "a security policy problem."

Putin scored another point against the EU and the US recently by agreeing to a landmark gas-pipeline deal which will run from Turkmenistan to Russia via Kazakhstan – a route long favored by Russia over a rival US proposal that would cross the Caspian. With EU states thus split on whether to deal with Russia as friend or foe, Putin has repeatedly gained the upper hand at joint meetings with the bloc and has taken to criticizing Washington. In Munich earlier this year, Putin stunned EU and American officials by raging against US unilateralism and warning that he would oppose a US-led "unipolar world" leading to conflict across the globe.

Since then, Putin has also vented his outraged at US plans to deploy part of its anti-missile defense system in Poland and the Czech Republic and warned that he intends

to suspend implementation of the 1990 Conventional Forces in Europe (CFE) Treaty, designed to reduce the number of troops, tanks, aircraft and artillery in the former Warsaw Pact and NATO countries. Putin’s reason for a moratorium on the CFE pact was the failure of NATO governments to ratify an updated version from 1999.

EU and NATO officials admit that dealing with Russia will be difficult in the months leading to the spring 2008 presidential election that will determine Putin’s replacement. 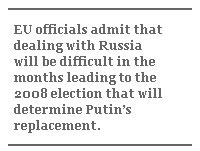 But they also insist, as one official put it, that "there is a limit to how much they can flex their muscles vis à vis Europe." Moscow needs European investments in the natural-gas sector and also depends on energy sales in Europe. Secondly, Europeans have warned that they will hold up Russian membership of the World Trade Organization unless Russia plays by the rules.

But such threats will remain little more than words until European governments can agree on a common response to Moscow's new assertiveness. "What we need is not self-defeating appeasement but realistic engagement with Russia," says a senior EU official. The challenge facing the EU is to find ways to overcome its own contradictions about whether to view Russia as a troublesome neighbor or a valued, if nettlesome, strategic partner.

Shada Islam is a Brussels-based journalist specializing in EU policy and Europe’s relations with Asia, Africa and the Middle East.