When Nicolas Sarkozy was elected president of France, there was talk of a big rupture with the past and France’s full embrace of globalization and American-style capitalism. That stance is about to be tested. He has taken on the powerful public-service unions, cut taxes for the rich and tackled France’s convention of a 35-hour workweek. Yet this Gaullist politician is none too fond of international trade competition, especially any that exports French jobs or undermines broadly defined national security; Sarkozy intervened personally in a merger that brought the Suez energy group under the control of the state, lest it come under Italy’s control. If the French economy falters at all, free competition and nationalist goals would come into conflict, suggests Jonathan Fenby, an observer of French politics and editor in chief of the research service Trusted Sources. Fenby expects that the French president would then pursue the narrow, nationalist interest all the while encouraging global expansion of French companies. French politics demand that their president display disdain of any form of globalization that does not trumpet French prowess. – YaleGlobal 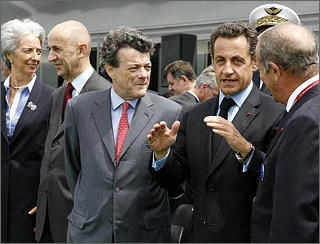 National champion: President Sarkozy, among the captains of French industry, hopes to keep the French first in a globalized world

PARIS: France has long had a problem with globalization. French companies have made the most of opportunities opened up for them around the world – from Renault’s alliance with Nissan in Japan to French firms running energy providers in Britain or water systems in China. But, at the same time, polls repeatedly show the French people alarmed about the effect of globalization in everything from the transfer of jobs to economies with lower costs to the latent feeling that it may all be an American-directed plot to undermine their country’s place in the world.

President Nicolas Sarkozy epitomizes this duality. His economic policy is one of reform to break down old structural barriers to growth – and brings with it a desire to make France’s presence felt more strongly round the world. He champions France’s internationalized businesses and sought to use a state visit to Washington to overcome the distrust and alienation that set in under his predecessor Jacques Chirac.

But Sarkozy is also a strong nationalist. He makes no bones about putting France’s interests first, and, since winning the presidency in May, has shown a readiness to use the power of the state to ram through defensive corporate deals while seeking to increase the influence of national governments over the European central bank.

The hyperactive Sarkozy may hope that, if he keeps running fast enough, he will be able to surmount the latent conflict between his world and nationalist views. The question is which would give way if, as seems quite possible, France’s growth falls below the level needed to finance the reforms he promised in his election campaign.

On past performance – not only of Sarkozy but of his predecessors since Charles de Gaulle founded the Fifth Republic in 1958 – the national interest will win. There would be nothing surprising about that; the question would be the terms in which Sarkozy asserted French primacy. But another issue would loom – the cost to France and its internationally-minded companies of not participating fully in economic globalization.

The strength of nationalist feeling and distrust of the wider world as it has been influenced by globalization has been shown in France in recent years: first by the continuing strength of the chauvinist far right of Jean-Marie Le Pen’s National Front before Sarkozy stole its electoral clothes this year and, second, the rejection of the European Union Constitution in the 2005 referendum, which was less about the wording of that massive document than a dismissal of what is known in France as Anglo-American economic liberalism, castigated by everybody from the Communists to Sarkozy’s predecessor Chirac. 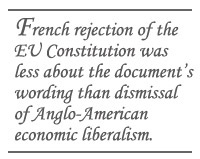 Polls show the French to be more opposed to capitalism than the inhabitants of other developed economies. The main opposition party, the Socialists, have never entirely shaken off Marxism, and there is an unmistakable strain of glee in French coverage of the sub-prime crisis in the United States. On his visit to the US, Sarkozy had to choose his words extremely carefully to rebuild bridges while not opening himself up to the charge of being a Bush puppet.

Sarkozy is a modernizer who has upset the political applecart by bringing Socialists into the government – and nominating the former Socialist Finance Minister Dominique Strauss-Kahn to head the International Monetary Fund. He has named more women to senior government posts than ever before. He has undermined the 35-hour working week, cut taxes for the better off, introduced higher-education reform and, crucially, taken on the public-sector unions over their pension privileges – there were serious protest strikes on these issues in October, led by the Communist federation, the CGT, with more promised in November.

But, like de Gaulle, he is also deeply attached to the French state, and the use of its power to get his way. He showed this when he intervened personally, with all the weight of his office, to sew up a deal forcing a merger between the Suez energy and environmental group with the state gas company, Gaz de France.

The merger had been promoted under the previous administration to save Suez from an Italian takeover. But it then ran into trouble. Swinging into action in the early autumn in typically direct and impatient style, Sarkozy made a speech saying that Suez must divest itself of its environmental arm to achieve the merger, something the company did not want to do. Then he contacted Suez’s biggest shareholders, before calling in the group’s chief executive, Gérard Mestrallet, who duly agreed to do as required by hiving off a majority stake in its internationalized water and waste-management business. The deal then went ahead.

The French state will have a 40 percent interest in the new entity, giving it control, in a move that turned the clock back to industrial policy as practiced by the Gaullists in the 1960s and 1970s, and then by the Socialists under François Mitterrand. Having pulled that off to build a major European energy group, Sarkozy is now busy to promote a similar link-up to create a nuclear group around France’s Areva company.

The idea is to create “national champions,” a notion that rings alarm bells in the more competition-minded European Commission in Brussels. Particularly ironic is the fact that the EU energy market is supposed to be opening up. There was nothing surprising about Sarkozy’s maneuver. During his brief tenure as finance minister under Chirac, he blocked Germany’s Siemens from taking over France’s Alsthom group. More recently, he has attacked the European Central Bank, which he blames for slow growth on the continent. This has not gone down well in Germany which regards the bank’s independence as sacrosanct – and which also dislikes the “national champions” approach.

In general, economic modernization is linked with an open policy that engages with international competition and globalization. Sarkozy’s nationalism puts him in a special category: French firms can invest and globalize afar, but a no-trespassing sign awaits foreign firms on French soil.

A couple of years ago, the mere rumor that Pepsi Cola might be thinking of buying the French food group Danone set off a storm of protest in France. Danone, meanwhile, continued its expansion as a major player in the fast-growing milk products business in China without any eyebrows being raised. The Chirac administration drew up a comprehensive list of “security” industries where foreigners would not be allowed to invest – including casinos. The list has not been modified under the new president. 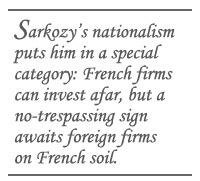 With his popularity slipping from its early stratospheric levels to 55 percent in late October, Sarkozy must keep his nerve. The greatest danger for France, its partners – and, ultimately, for the president himself – would be if he went into a chauvinistic crouch that militated against the reforms that his country needs, to enable it to accompany undoubted achievements with an economy that can generate greater wealth, more evenly spread, and sustain national self-confidence.

The inheritance of the powerful state, the tradition of nationalist economic policy stretching back to the era of Louis XIV and the doubts many French have about the challenges of globalization all influence the new president. How he resolves them will be a continuing story of his five-year term.

Jonathan Fenby is editor in chief of the analytical research service Trusted Sources (www.trustedsources.co.uk) and author of “On the Brink: The Trouble With France” (Abacus).