China may have begun opening its economy 20 years ago, but Sars has shown that capitalist economic reforms aren't the only criteria for being part of the global economy. Control of the media is still seen as a basic function and right of the Chinese Communist Party, but it is precisely the party's obsessive control of information that helped fan the spread of Sars after its initial eruption in Guangdong province. Internal obstacles to information sharing also had international repercussions, as China couldn't give an accurate account of the situation to international health authorities who wanted to offer help. Sars may be the wake-up call needed to show Chinese leaders that freedom of information can help control a crisis and promote the greater good of the country. - YaleGlobal

Openness is essential for successful integration
Frank Ching
Friday, May 2, 2003 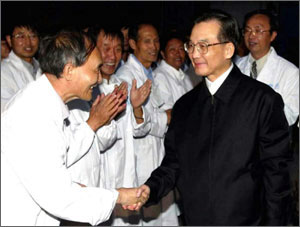 So far China's entry into the global economy has brought many rewards, especially a blistering growth rate. Now, the Sars (Severe Acute Respiratory Syndrome) epidemic threatening to derail that growth has brought China an object lesson about the price a country must pay for continued success: an open society and a free media.

That China is beginning to take in the lesson was demonstrated in the new candor shown by China's top leaders. On his first foreign trip since taking over as China's premier, on April 29 Wen Jiabao admitted China's errors at a special Sars summit in Bangkok where he met with the leaders of the Association of Southeast Asian Nations. "Right now, places like Guangdong, where Sars hit rather early, still see a few new cases," the premier said in his speech. "The number of Sars cases in Beijing, Shanxi, and Inner Mongolia is rising noticeably. The situation has not been brought fully under control and there is the tendency of spreading to most provinces of China."

It is a sea change from early April. Until April 19, nearly four months after Sars has begun silently ravaging south China, the official propaganda apparatus was denouncing those who voiced skepticism about the figures being issued by the Health Ministry. The China Daily, for example, on April 9 denounced those who had criticized China's handling of the Sars epidemic as "an anti-China clique." As recently as April 17, the online edition of the People's Daily labeled critics as "malicious."

The price for this business-as-usual secrecy about bad news and blaming "enemies" has been a high Sars toll. The total number of cases in mainland China on May 2 stood at 3, 799, of whom 181 have died. The annual trade fair at Guangzhou, where thousands of contracts are signed for exporting Chinese goods, ended with empty stalls. Shops and restaurants in Beijing are empty, and the tourists have fled. Instead, China has been subjected to severe international criticism, both by the media and the World Health Organization. The WHO, for example, in uncharacteristically undiplomatic language, publicly criticized China for its handling of the Sars outbreak. Gro Harlem Brundtland, WHO director-general, said in an interview with the BBC that China should have reported its first cases earlier. "It would have been definitely helpful if the international expertise and WHO had been able to help at an earlier stage," she said.

Since the dismissal of Health Minister Zhang Wenkang and Beijing Mayor Meng Xuenong on April 20, China has tried to make up for its previous see-no-evil, hear-no-evil approach. It has put the energetic and formidable Vice Premier, Wu Yi, in charge of the anti-Sars campaign and has appointed a dynamic new mayor of Beijing, Wang Qishan. It is now issuing daily reports to the public and to the World Health Organization on new cases in Beijing, where the situation has deteriorated rapidly, and other parts of the country.

In an attempt to keep the epidemic from spreading within the capital, the Chinese have shut down all schools as well as theaters, cinemas and Internet cafes. More than 10,000 people have been quarantined. In rural areas, funerals and weddings are being postponed to prevent the virus from spreading.

One key problem was the nature of China's health care system. In Beijing, for example, there are hospitals run by the Ministry of Health, by the municipal government and by the military. The Health Ministry had no jurisdiction over military hospitals, which did not have to report the number of Sars patients to the ministry.

So, while the outside world was clamoring for information which the ministry itself didn't have, the ministry attempted to cover up its own lack of power by insisting that the figures it was giving out were comprehensive and included all hospitals. This assertion was proved to be a lie when WHO experts were finally allowed to visit military hospitals. In addition, the central government lacks a good system for gathering data from the hinterland. The system of separate jurisdictions in Beijing was echoed in other cities and provinces in the hinterland, with the result that no one had a clear overall picture of what the situation was.

Pressure from the WHO for China to make daily reports covering the whole country is forcing Beijing to create a system that did not exist before. It is resulting in a new openness and accountability that is likely to spread to other areas of the Chinese government.

Lack of transparency often results in the proliferation of rumors. One such rumor wreaked havoc on April 27 when thousands of residents of Hagugang, an agricultural market town 12 miles northwest of the port of Tianjin, ransacked the interior of a junior high school. The riot was triggered off by reports that the building was being converted into a ward for urban Sars patients. (As it happened, that wasn't far from the truth - the building was meant to be a quarantine center for people who were not themselves sick but who had been in close contact with Sars patients.)

One reason why the epidemic was able to spread was that it went largely unreported within China. Part of the reason was that it broke out at a politically inconvenient moment. By and large, the controlled Chinese media is enjoined to tailor reports in such a way as to bolster social stability in the country. Moreover, the first cases in Guangdong surfaced in November, when China was holding a party congress at which General Secretary Jiang Zemin handed over the reins of the party to Hu Jintao. China's propagandists did not want to spoil the solemnity of the occasion with reports of a mysterious new disease in Guangdong.

By February, however, people in Guangzhou knew by word of mouth that a flu-like disease was rampant, and many bought vinegar and resorted to other traditional remedies. The Guangdong authorities finally announced that there had been an outbreak of atypical pneumonia, but immediately declared that the situation was under effective control.

It wasn't, of course, and spread within Guangdong and into other areas. The disease apparently arrived in Beijing in March, coinciding with the holding of the National People's Congress, when Mr. Jiang gave up the presidency to Mr. Hu, and when Mr. Wen took over as premier from Zhu Rongji. Again, the media was instructed not to write about it, and to focus only on good, uplifting news.

Even today, while the press is free to criticize the men who have been dismissed, it is unable to report whether higher-level officials had condoned their actions. What China needs is a change in the system. The party should consider the media a partner and give it a free hand to conduct investigations and to report, and let the chips fall where they may. A controlled media is incompatible with China's desire to be a world power in a globalized economy. But China's leaders don't seem to have learned this lesson yet. Li Changchun, the party official in charge of propaganda, has just called on the media to "help unite the people and boost public morale" in the fight against Sars. Old habits die hard.

Frank Ching is a Hong Kong-based journalist and commentator.