The Sovereignty of Disease

With the outbreak of Severe Acute Respiratory Syndrome in 2002, nations embarked on a new era of global cooperation, sharing information and partnering on investigations, reporting and prevention strategies. The cooperation continues with outbreaks of the avian flu, according to David L. Heymann, director of the Communicable Diseases Program at the World Health Organization. Real-time electronic reporting with the internet minimizes the temptation of countries to deny association with the origin of the epidemic. Instead, countries have voluntarily reported information, working together to determine the locus of disease and best measures of containment. Heymann emphasizes the value of global cooperation with the WHO as well as preventative polices that transcend notions of national sovereignty. SARS and the avian flu will not be the last potential epidemics in human history, Heymann notes, and global cooperation stands as the best strategy for minimizing global threats. – YaleGlobal

The Sovereignty of Disease 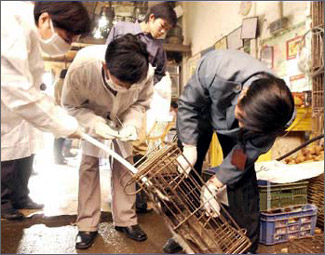 GENEVA: Information about infectious disease outbreaks travels today at speeds and in ways not imagined just 30 years ago. Individual countries can no longer ignore the disease or hide reports. No recent infectious disease outbreak exemplifies this better than that of Severe Acute Respiratory Syndrome (SARS) in 2002-2003. Detected by reports on the internet, the SARS outbreak demonstrated that the global community has assumed the role of reporting infectious diseases that threaten to spread internationally, aided by the ease and power of electronic communication through the World Wide Web. The global community responded to the SARS outbreak with a rapidity and scale never before seen for an emerging infectious disease outbreak. From the start of the SARS outbreak, networks of epidemiologists, clinicians and virologists from around the world linked together to participate in its containment. They freely shared information among themselves and with the scientific community, identifying a new coronavirus as the cause of the outbreak, providing the best possible guidance for patient management and defining the risk factors for infection and modes of transmission. 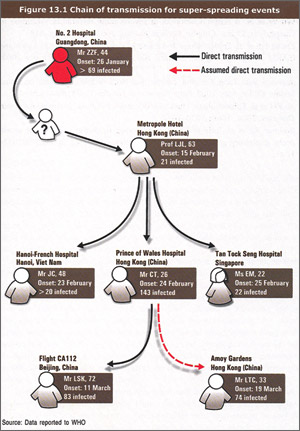 Table 1. Individual chains of transmission from persons who carried infection to countries such as the Philippines, Mongolia and Vietnam. (Illustration from "SARS: How a Global Epidemic Was Stopped.")

In many instances the detection and response to the SARS outbreak appeared to infringe on national sovereignty, challenging the pre-existing norms that countries have the exclusive right to control the information they communicate and the public health measures they apply. The World Health Organization (WHO) first asked countries to report probable cases of SARS in real time with electronic reporting. As real-time epidemiological evidence showed that persons with SARS spread the disease internationally by air travel, the WHO then asked countries to screen airline passengers and prevent those with SARS or a history of contact with SARS from traveling. Finally, as epidemiological evidence continued to show that persons with SARS were traveling internationally and that other factors might also contribute to SARS transmission, the WHO asked international travelers to postpone travel to areas where SARS was occurring.

Despite widespread social disruption and economic loss, countries willingly collaborated in these measures of global solidarity. International travel to affected areas fell by 50 to 70 percent, hotel occupancy dropped by more than 60 percent, and businesses in tourism-related areas failed. Bio Economic Associates of Massachusetts estimates the direct and indirect costs of the outbreak at nearly US $100 billion.

The book “SARS, How a Global Epidemic Was Stopped” describes these events that led to stopping the epidemic. It traces the SARS epidemic from its origins in the Guangdong Province of China to its international spread from a hotel in Hong Kong where a doctor infected in the Guangdong Province stayed overnight and inadvertently infected persons who carried the virus to neighboring Asian countries and as far away as Canada. It likewise details the epidemiology, natural history, and clinical signs and symptoms associated with human infection using easy-to-understand terminologies that make the book useful for health workers at all levels of the health system and of interest to the general public. Through personal stories and accounts of the outbreak, the book follows the epidemic from the initial description of an unknown respiratory disease in Vietnam by Carlo Urbani, a public health hero who himself became infected and died, to the last known cases of infection related to laboratory accidents in Singapore and China.

Chapters describe meetings at the highest political level, such as a meeting of the WHO regional director in the Western Pacific Regional Office and the former minister of health of China in late March 2003 to urge more transparent information-sharing; the infection’s impact on hospitals’ ability to maintain working conditions as health workers became infected; and elaborate measures taken by some countries to screen international travelers or quarantine those who had been exposed to infection. The book analyzes sites such as the Amoy Gardens Complex in Hong Kong, where 329 residents appear to have been infected by a series of events that led to environmental contamination of their bathing areas, and events such as Flight CA 112 from Hong Kong to Beijing, where at least 22 passengers and 2 crew members were infected by a passenger with signs and symptoms of SARS – explaining the role in amplifying transmission of the SARS Co-Virus. Illustrations show the individual chains of transmission from persons who carried infection to countries such as the Philippines, Mongolia and Vietnam.

In late 2003, another infectious agent that had first been shown to cross the species barrier between animals and humans in 1997 – the avian influenza virus (H5N1) – began spreading rapidly in poultry throughout Asia. Asian governments have openly reported infected poultry flocks and human H5N1 infections as they occur, keeping both their own citizens and the international community informed. While some delays are inevitable, as officials await confirmation from international reference laboratories, nations continue to provide reports despite financial consequences in the agricultural sector and culling of entire flocks. With human-to-human transmission of avian influenza suspected in a family cluster in one region of Thailand in 2005, the government recruited volunteers to conduct farm-to-farm searches for any additional clusters of human cases or unreported outbreaks in poultry. In China, Laos, Cambodia and Indonesia – where outbreaks have likewise occurred in poultry – governments issued reports after confirmation in poultry or in humans and freely shared epidemiological information from outbreak investigations. And as H5N1 has spread to Europe and Africa, countries have likewise reported disease in poultry, migrating avian populations and humans. Interests of national and international public health that became the norm during the SARS outbreak continue to prevail; they are no longer masked by concepts of national sovereignty.

The recent international spread of another infectious disease, polio, has likewise demonstrated solidarity among countries. Since 2003, the wild poliovirus has spread to 25 previously polio-free countries, and these countries have freely exchanged genetic information about these viruses through the global polio surveillance network, linking each imported virus to its country of origin. The shared information has shown that northern Nigeria and northern India are the source of the virus in these re-infected countries, and neither country attempted to deny this fact. China recently reported another infectious disease, an outbreak of Streptococcus suis in pigs that then spread among 206 humans with 38 deaths, and freely shared detailed information about the investigation and control activity. Such solidarity in surveillance and response affirms that the new standards for reporting and responding to public health events established during the world’s response to SARS continue to prevail over issues that might once have been considered the sole domain of a sovereign nation.

SARS, polio and the H5N1 will not be the last new infections that flourish amid the conditions in a globalized world. Unlike SARS, emerging infections do not always transmit so easily from human to human. Some will emerge, cause illness in humans and then disappear, perhaps to recur at some time in the future. Others will emerge, cause human illness and transmit for a few generations, become attenuated, and likewise disappear. And still others will emerge, adapt to human populations and become pandemic or endemic, and remain intrinsic parts of our human infectious disease ecology. “SARS, How a Global Epidemic Was Stopped” shows how our globalized world set new norms and standards in infectious disease reporting and response, and provides many of the lessons needed to face these future public health assaults.

Click here to read an excerpt from “SARS: How a Global Epidemic Was Stopped.”

Dr. David L. Heymann is director of the Communicable Diseases Program at the World Health Organization.