Turkey and the European Tent – Part I

Despite a tentative start, the EU entry negotiations for Turkey are a momentous event for the continent. In a two-part series, YaleGlobal examines the ramifications of the Turkey-EU negotiations. In the first installment, journalist Shada Islam explores the positive potential of the talks for both parties. For Turkey, the process will encourage further economic development, as well as greater political role and human rights for its citizens. For Europe, the benefits are manifold. Despite concerns about the economic costs of integration, many observers believe that Turkey's additional workforce will be a boon to regional industry. More striking are the potential cultural effects: the accession of even a secular Muslim state sends an important welcoming message to Europe's Muslim populations, which is depressed by rising European anti-Islamic sentiments. To be sure, many Europeans, both politicians and the public, are uneasy about Turkey's entry, viewing its Muslim character as irreconcilable with the rest of the EU. Clearly, much work lies ahead. "For the first time," Islam writes, "the European leadership must start giving an honest, public account of the many advantages of embracing Turkey as an EU member." If they do so, she concludes, the negotiations will likely build a strong framework for future integration. – YaleGlobal

Turkey and the European Tent – Part I

Opening the door to Ankara is a win-win for both the European Union and Turkey
Shada Islam
Tuesday, October 11, 2005 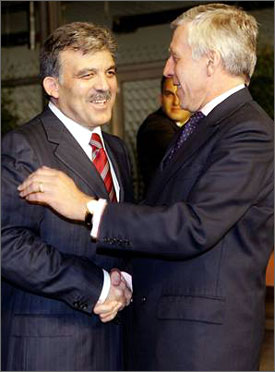 BRUSSELS: Years from now, historians looking back at the evolution of the European continent might consider October 3 a landmark. On that day, the start of negotiations on Turkey's membership in the European Union marked a triumph for reformists who have battled long and hard to whip the country into shape for EU entry. The talks signal the opening of EU doors for the first time to a predominantly Muslim country – albeit one with a secular constitution – and represent a new political maturity, ever since Spain's Catholic monarchy stamped out the last Islamic rule from the European continent in the 15th century. It marked a victory for European policymakers who reject the notion of the EU as a Christian club and of religion as a dividing force between people. But it was not an unalloyed victory, as significant obstacles remain in the path of transforming the dream of a truly secular multi-religious Europe into a reality.

It is not just a historic move. Both sides stand to reap immediate rewards. Turkey wins kudos for surmounting an endless series of hurdles to qualify for EU membership, thereby proving its credentials as a modern and dynamic society ready to pursue the challenge of further reform. The EU, meanwhile, has boosted its flagging international reputation by showing it can take hard decisions despite months of moroseness following the French and Dutch rejections of a new EU constitution this summer.

Even more significantly, Europe's embrace of Turkey provides vivid proof of the success of the bloc's "soft power" approach to ensuring political change and encouraging the emergence of moderate Islam in its neighborhood. The EU's use of gentle pressure to promote change in Turkey has won admiration from the many Muslim governments weary of hard-line US policies and unimpressed by Washington's heavy-handed public relations. By reaching out to Ankara, the EU has also sent a message of reassurance to its own 20 million Muslims, who are increasingly uneasy about their future in Europe – particularly with the rise in anti-Islamic sentiment following the September 11 attacks, the Madrid train bombings, and the London underground explosions.

The start of the talks has not been easy. Last-minute Austrian demands that Turkey be offered a watered-down privileged partnership almost scuppered the negotiations before they started. As EU foreign ministers, meeting for crisis talks in Luxembourg, squabbled and bickered over the final membership terms, British Foreign Secretary Jack Straw engaged in a complicated juggling act including talks with Austria, Turkish Foreign Minister Abdullah Gül, and US Secretary of State Condoleezza Rice.

Despite the unseemly quarrels, however, Straw and Gül did indeed make history. The launch of negotiations was a strong signal that a clash of civilizations is not inevitable, said Straw, adding: "This is proof we can live, progress, and work together." In Ankara, Prime Minister Recep Tayyip Erdoğan said, "This is a victory for common sense."

Europe's challenge to doomsayers, who foresee conflict and confrontation between the West and Islam, marks the coming-of-age of an increasingly diverse and multi-religious continent, agrees Vural Oeger, a German social democrat of Turkish descent and a member of the European Parliament. By keeping its word to Turkey, the EU has boosted its standing in the Islamic world and rejected extremists' vision of a divide between the West and Islam, says Oeger, adding: "I am sure that al-Qaida is very angry."

Sajjad Karim, a British liberal democrat member of the European Parliament, agrees that the EU-Turkey talks will help heal some of the wounds wreaked by continuing anti-Islamic discrimination. As a moderate and secular Islamic nation, Turkey can also contribute to the ongoing debate in Europe on modernizing Islam, he says. "Turkey is democratic, secular, and Muslim, a perfect model for many," adds Karim.

However, Brussels and Ankara face an array of daunting day-after challenges, including continuing public hostility to Turkish accession in Europe and rising anti-EU sentiment in Turkey. In addition, many leading European politicians, including the next German chancellor Angela Merkel and Nicolas Sarkozy, France's would-be candidate in 2007 presidential elections, remain deeply skeptical about allowing Ankara into the Union.

While some see Turkey as proof that Islam and democracy can co-exist, opinion polls in Europe show continuing public fear of the Muslim nation. European fears of increasingly militant Muslims in their own backyard have grown in the wake of recent terror attacks. Also fueling the unease is the murder last year of Dutch film maker Theo Van Gogh by a young Moroccan, as well as the recent French controversy over the ban on Muslim headscarves in schools. Echoing such concerns, French President Jacques Chirac has warned that Turkey will need to undergo a "major cultural revolution" to gain entry into the EU.

Many in Europe also worry at the economic cost of integrating a vast and still largely underdeveloped country of over 70 million people. Proponents of Turkish membership insist, however, that Turkey is wealthier than the eastern European countries seeking EU entry and that the process of development will speed up even further during the accession negotiations. Many contend that the large Turkish workforce will be essential in helping the EU compete with the likes of China and India.

Negotiations are expected to take between 10 to 15 years and could be suspended at any time if even one EU country raises objections. Ankara will have to press ahead with political and human rights reforms – and ensure their implementation in several areas. "Turkey will be under ever closer scrutiny by the EU, by European public opinion, and by member states," warned EU enlargement chief Olli Rehn. There will be pressure on Turkey to help find a political solution in Cyprus and to accept responsibility for the alleged genocide of Armenians by the Ottomans in 1915.

Also, EU policymakers admit that although more and more countries are knocking on EU doors, there is a certain "enlargement fatigue" following last year's big-bang expansion to 25 states. Significantly, the EU membership conditions for Ankara spell out, for the first time, that Turkish accession will depend on the EU's ability to absorb the country as a full member.

As negotiations start in earnest, EU and Turkish leaders will have to undertake the mammoth task of preparing their citizens to live together. EU politicians have too often taken the easy road by pandering to the anti-Islamic prejudices of the far-right parties, thereby increasing popular fears about Islam and Muslims.

They will now have to encourage more cultural exchanges and contacts between students, non-governmental organizations, and business leaders. For the first time, the European leadership must start giving an honest, public account of the many advantages of embracing Turkey as an EU member. Whether history was indeed made on October 3 will be determined by how the European and Turkish leaders and public carry their new mandate to fruition.