In the second installment of a two-part series on the ramifications of the Turkey-EU negotiations, Mohammed Ayoob wonders if in the end Turkey will be ever be inside the European tent. Turkey became an associate member of the European community in 1963, but has waited more than 40 years for membership talks to begin. In spite of loyal membership in NATO, Turkish citizens are well aware that their European counterparts do not consider them a European nation. Faced with such disapproval, Ayoob predicts that lengthy negotiations will come to naught: either the Europeans will reject Turkey or the exhausted Turks will finally give up. Even without membership, though, the negotiations will have far-ranging effects on Turkish society. Some of these changes are already apparent: advances in human rights and democratic consolidation, for example. Others will unfold in the coming years. Ayoob contends that in response to the European emphasis on religious difference, Turks will become more confident in their Muslim identity and more focused on Middle Eastern politics. "Unless Europe reverses course swiftly and manifests such change through concrete measures," he warns, "the Luxembourg drama may provide the catalyst that is likely to irreversiby change the direction of Turkish foreign policy." – YaleGlobal

In the end Turkey may find itself excluded, yet richer by the experience and turned towards the Middle East
Mohammed Ayoob
Thursday, October 13, 2005 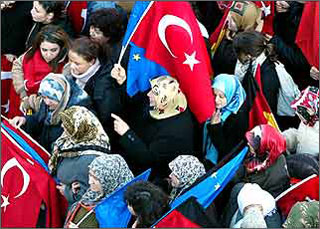 Turks at the gate: Citizens in Ankara show their support for joining the European Union, but the gate may remain closed

EAST LANSING, Michigan: Late on the night of October 3, the Turkish foreign minister waited on tenterhooks in Ankara before flying to meet with his EU counterparts in Luxembourg. That drama has come to symbolize for most Turks the European treatment of their country for the past four decades. Despite the indignity, however, the changes brought in Turkey through the process of joining the European Union will have far-reaching consequences that few may have foreseen.

Turkey's humiliation in waiting to be invited to begin talks for an eventual membership while countries of the European Union's erstwhile enemy camp have gained entry is more than excessive. Turkey became an associate member of the European community in 1963 and applied for full membership in 1987. Most Turks find the delay in their country's admission to the EU galling, especially in light of Turkey's loyal membership of, and military contributions to, NATO for more than half a century. The EU actions sent the signal to many Turks that Europe is still considered synonymous with Christendom. "Turks are good enough to die for Europe but not to live in it" is a popular remark in Turkey.

Most Turks believe the major reason for their denied entry to be their Islamic faith. The rhetoric emanating from influential quarters in France and Germany in the past few years has only reinforced this feeling. In 2003, former French President, Valery Giscard d'Estaing, chairman of the EU's constitution commission, asserted in an interview with Le Monde, "[Turkey's] capital is not in Europe and 95 percent of its population is outside Europe. [It has] a different culture, a different approach, and a different way of life. It is not a European country." EU membership for Turkey, according to d'Estaing, would mean "the end of Europe."

In the same vein, former West German Chancellor Helmut Schmidt publicly expressed the fear that Turkey's admission to the EU "would open the door for similarly plausible full membership of other Muslim nations in Africa and the Middle East." Angela Merkel, Germany's Chancellor-designate, and Ursula Plassnik, the Foreign Minister of Austria, have continued to echo such views. The undertone of such rhetoric is clear: Turkish admission into the EU would open the floodgates for a massive Muslim demographic invasion of Europe, thereby seriously eroding its Christian character. In other words, the "barbarians" must be kept outside the sacred premises.

This cavalier treatment of Turkey has gravely damaged Europe's image in the country and severely reduced its attraction for many Turks. Turkish officials and opinion makers argue with great merit that Turkey, especially since the rise of the Justice and Development Party (AKP) government in November 2002, has done a great deal in terms of meeting the Copenhagen criteria for EU membership. Turkish leaders have made great progress on human rights (especially minority rights issues), in economic policy reform, and, above all, in civilian-military relations. Given the power of the vested interests, especially the once all-powerful army, these are no mean achievements. But, Turkish officials and analysts argue, the bar has always been raised higher as Turkey has striven to meet European demands.

Their arguments are borne out by a series of recent EU actions, particularly the admission of the Greek part of Cyprus before the unification of the island. Cyprus has been divided between the Turkish north and the Greek south since the Turkish invasion of 1974 following an attempt by a Greek Cypriot junta to unite Cyprus with Greece. It was the Turkish Cyptiots, backed by Ankara, who had resisted plans for the re-unification of the island. However, roles have reversed recently with the Turkish Cypriots, with Ankara's blessing, voting in a referendum heavily in favor of a UN plan for reunification and their Greek counterparts voting against it.

The current Greek Cypriot leadership, assured of admission to the EU, openly campaigned for a "no" vote. Given this context, most Turks find the demand that Turkey's admission into the EU be held hostage to the resolution of the Cyprus problem deliberately malicious. For many Turks, the European attitude toward Cyprus provides the most credible support for the clash of civilizations thesis. Its linkage with Turkish membership of the EU adds insult to injury.

Given recent trends and opinions on both sides, it is not implausible that in 2015, when the Turkey-EU negotiations are scheduled to conclude, Turkey will either still be waiting at EU gates or, in utter disgust, will have withdrawn its application most probably the latter. Regardless of the outcome, Turkey's candidacy has done the country one great favor: It has helped consolidate the democratic process in Turkey by sidelining the military and improving human rights. Democratic consolidation in Turkey has, as a result, taken on a life of its own and will continue apace irrespective of the progress of EU membership talks.

The emergence of the AKP, with its Islamist roots, as the leading advocate of political and economic reform is a further healthy development that signifies two things. First, mainstream Islamists have accepted the rules of the game including secularism and have repackaged themselves as conservative democrats, akin to the Christian Democrats of Western Europe. Second, the artificial dichotomy, created by the Kemalist elite, between secularism and the country's Muslim identity has been exposed as a charade devised to prop up authoritarian rule.

Turks will become increasingly self-confident in their Muslim identity over the next decade. The European rebuff, when combined with the popular assertion of "Muslimhood" as distinct from Islamism will push Turkey to reevaluate its relationship with the Middle East, including its policies toward major regional problems. The two US-led wars against Iraq had already begun this process, but it will accelerate in the next decade due to, among other things, the creation of a de facto Kurdish state in northern Iraq, against whom Turkish, Iranian, and Arab interests will coincide. Turkey is unequivocally opposed to an independent Kurdistan, fearing its demonstration effect on its own Kurdish minority.

The likely US disengagement from Iraq and possible retrenchment from the region, following its failure to facilitate a stable and legitimate order in Iraq, will further stimulate Turkey to demonstrate greater strategic autonomy from US policies in the Middle East. The decreasing role of the military in national security policy-making will also negatively impact Turkish-Israeli relations, whose primary promoter is the Turkish military. The differences between Turkey and Israel over Iraqi Kurdistan, which Israel clandestinely supports, are also likely to grow. Moreover, Turkish policies will increasingly reflect popular support for the Palestinian cause, as Turkish democracy consolidates.

All in all, Turkey seems to be headed in directions not adequately foreseen by commentators focusing on Turkey's likely benefit from EU membership. The brazen European treatment of the proud Turkish people literally keeping their foreign minister waiting at the airport, while the European powers decided whether negotiations for entry into the EU should begin, will likely be seen as a deliberate signal to Turkey that it is not welcome in Christian Europe. Unless Europe reverses course swiftly and manifests such change through concrete measures immediately, the Luxembourg drama may provide the catalyst that is likely to irreversibly change the direction of Turkish foreign policy.